Birmingham New Street station is on track for September 2015 opening 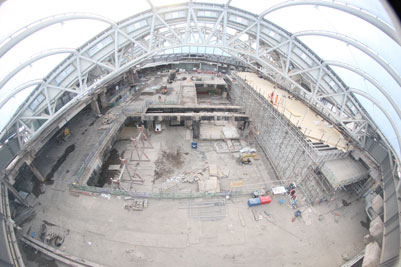 Birmingham’s landmark new station will open in 2015 providing a modern and fitting gateway to the city. Passengers have just nine months to wait until they can enjoy the bigger, better, brighter Birmingham New Street station along with the new premium shopping destination, Grand Central, when they open in September 2015. There are some key milestones over the coming months. January and February see the glazing installed on the shop fronts while the flooring of the new concourse will be finished.

In May a major new train crew facility will be opening within the station, bringing in staff from temporary accommodation. It will also see the removal of the first part of the main wall which separates the new and old station which will allow services to be connected and the building to begin to operate as one station.

Martyn Woodhouse, Mace’s Director of Delivery for the project, said: “We have a lot of work to do over the next nine months, but we have a great team and are determined that the station the people of Birmingham will walk into in September will be a monument to the complex engineering and years of hard work which have gone into it.”

The summer months herald a hive of activity with the new concourse being fitted out with finishes to the waiting rooms, shops and public facilities. The Navigation Street bridge will reopen to the public, the remainder of the station’s main wall and other hoardings will be removed and the final finishes will be completed.

Councillor Tahir Ali, Cabinet Member for Development, Transport and the Economy, said: “This really will be a great year for Birmingham with the re-vamp of New Street station completed, which brought jobs and apprenticeships to the city. And it’s not just a new station that Birmingham can look forward to this year. Grand Central will also be opening its doors in September. With John Lewis as the anchor store and 60 other shops and restaurants there will be further job opportunities and it will be another boost to Birmingham’s economy.”

The names of retailers in Grand Central continues to increase with outlets including The White Company, Office Shoes, Cath Kidston, L’Occitane, Square Pie, Tapas Revolution and Crepe Affaire all confirmed.

Richard Brown, Grand Central’s Development Director, said: “Grand Central Birmingham presents one of the most exciting retail developments in the country to emerge in 2015. It will provide a unique shopping and station experience with retailers and restaurants surrounding the stunning atrium concourse forming Birmingham’s ‘meeting place’, where friends, family or colleagues go for a day of indulgence with exclusive shops and delicious food all in one place. The development is making good progress with the start of the New Year seeing the final building phase taking place. We will also be revealing to shoppers the latest premium retailers to sign up to Grand Central.”