UK’s First Tram Train on its way to South Yorkshire

The UK’s first Tram Train has begun is journey from Vossloh’s Valencia plant in Spain to South Yorkshire for service on Sheffield’s Supertram network. 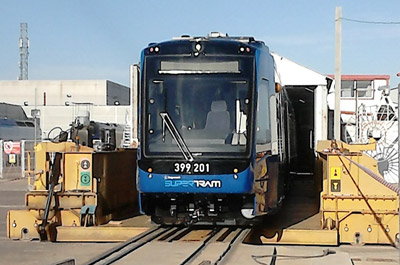 The fully constructed 37 metre Citylink Class 399 Tram Train vehicle left manufacturer Vossloh’s plant in Valencia on a two week journey via Santander arriving by boat at Southampton on 28 November 2015. The load will then continue north until it reaches is final destination in South Yorkshire on 01 December 2015.

The UK’s first Tram Trains will run on the Supertram network and the national rail network between Sheffield and Rotherham from 2017, allowing passengers to make a single journey between tram stops and conventional rail stations. The new vehicles have the signalling, power supply, control and telecommunications capability to run on both modes of rail. The arrival of the Tram Train will be a major milestone in a pilot scheme delivered by South Yorkshire Passenger Transport Executive (SYPTE), Network Rail, Stagecoach Supertram, Northern Rail and the Department for Transport.  The South Yorkshire’s Tram Train pilot will run for two years while customer satisfaction, passenger numbers, reliability and costs are tested. Tram Train will continue to run as a local service if the pilot is successful.

“This is a great milestone in the pioneering Tram Train project”

Transport Minister Andrew Jones said: “This is a great milestone in the pioneering Tram Train project which, when complete, will mean better journeys for passengers in South Yorkshire, as well as helping to boost the economy of the local area and beyond. I am looking forward to seeing the first vehicle arrive in Sheffield next month.”

Stabled at Stagecoach Supertram’s Nunnery Square depot, which has undergone modifications to accommodate Tram Trains, the vehicles are painted in the Stagecoach Supertram blue, orange and red livery and will undergo testing before they are introduced on the Supertram network before May 2016 to enhance capacity.

Tram Train vehicles are enhanced from the typical specification of a tram to make them suitable for operation on the main line as a train as well as street running. South Yorkshire’s Tram Trains are dual voltage vehicles that can operate on both the 750 V Overhead Line Equipment (OHLE) of Supertram’s network and the 25 kV OHLE of the National Rail network, and so are ‘future-proofed’ for higher voltage rail lines.

The vehicle wheel profile is suitable for both tramway and conventional track. They meet the strict vehicle safety of a train – with higher vehicle crashworthiness to allow inter operation with conventional trains, and the Tram Train brakes are designed to stop safely in all conditions, including City Centre traffic.

According to SYPTE, the Tram Trains are equipped to meet main line lighting requirements for visibility, but also have Road Traffic Act compliant head lights, horns, wing-mirrors and direction indicators necessary for on-street operation. Additional main line signalling and communications equipment, such as TPWS and the Global System for Mobile Communication – Railway (GSM-R), is also installed on board.

Speaking on behalf of the Tram Train project team, SYPTE’s Executive Director Steve Edwards, said: “Tram Train is a first for the UK. The design and planning to make Tram Trains run is a complex operation and we’re delighted this important milestone brings us one step closer to making the scheme a reality.

“Tram Train will demonstrate the potential, both locally and nationally, of this new technology to deliver value for money services. It will provide a boost to the regional economy, thanks to improved connections across the region. And, if the pilot is successful, it opens the way for Tram Trains to be introduced in other parts of the country.”

Improvement works are underway including the electrification of the rail network between Sheffield and Rotherham (to 750 V), building new Tram Train platforms at Rotherham Central and Parkgate, adaptations to the Supertram network to accommodate the wheel profile of Tram Train, and the construction of a new 160 metre section of track – called the ‘Tinsley Chord’ – linking the tramway to the train line. The signalling system will also be enhanced to minimise the risk of a collision between trains and Tram Trains. A train protection and warning system (TPWS) will be installed at all signals, not only junctions and sites with high levels of signal passed at danger (SPAD) incidents.