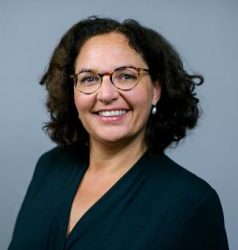 Elisabeth has held various posts in the European Commission since joining in 1996, dealing with budget, budget control and anti-fraud, including as Commission Spokesperson. She was a member of the Cabinet from 2004-2008 (Vice-President Siim Kallas, Commissioner for Administrative Affairs, Audit and Anti-Fraud) and Head of Unit responsible for relations with the Court of Auditors and budgetary discharge. In 2010-2014 she joined DG MOVE and headed the planning, inter-institutional and communication unit for European transport policy. At the start of the Juncker Commission, Elisabeth joined the cabinet of Vice President Kristalina Georgieva, in charge of budget and human resources, first as Senior Expert and then as Head of Cabinet. Elisabeth retured to DG Mobility and Transport in 2017 and was recently appointed Director for Land Transport (rail and road). Elizabeth holds an MSc. from the University of Vienna and an MA in European Affairs (Collège d’Europe, Bruges).