I have been heading the project since The Construction Act came into force on 28 May 2010, and it is also known as the ‘New Line Solution’ as the project is a completely new railway out of Copenhagen via Køge to Ringsted. In Ringsted, it connects with the existing railway across Zealand connecting the island with Fyn and Jutland. Banedanmark, the national provider for railway infrastructure, is the client.

Before the Copenhagen–Ringsted line was decided on, the other solution which was turned down was the construction of a fifth track out of Copenhagen from Hvidovre to Høje Taastrup. This solution would not have solved the longterm capacity problem between Copenhagen and Ringsted and could have easily become a bottleneck again – a situation the current railway traffic experience from time to time. Neither could it comply with the Danish Parliament’s vision of the One Hour Target, which means that the travel time between the biggest cities in Denmark, e.g. from Copenhagen to Odense and from Odense to Aarhus should take just one hour.

Knowing the project to perfection

As Project Director, I acquired excellent background knowledge about the project from my time as Project Manager at Trafikstyrelsen (the Danish Transport Authority) and also at the former body Banestyrelsen (the Danish Railway Authorities). In those roles I was involved with all the ground work in the programme phase of the New Line Solution, such as alignment, railway technology, environmental impact and involvement of municipalities and other authorities.

My combined experience from the political and the executive phases is vital to keep the project’s momentum, as I can act and react pragmatically and make quick decisions based on knowledge and insight. Many issues that arise have been discussed and settled in the past, so there is no need to spend more valuable time investigating them further.

The Copenhagen–Ringsted line is a pioneer project as it is the first time in many years that a new railway has been built in Denmark. Being the first employed, my initial task was to hire and bring people together with well defined targets on the horizon.

With no similar projects in Denmark I could not go for the cut-and-paste-solution and hire people with a proven track record from railway projects. Instead, I chose people with different competencies and backgrounds, who could come together around the project’s mission.

We are basically a procurement organisation which literally buys constructions, as well as solutions and services. A lot of the know-how is acquired outside the Client Group, and we set-up the framework, so our consultants and contractors can succeed with their work.

As far as the Client Group is concerned, the most important thing is to work as a team. Everybody on the project has a dedicated area of responsibility and on a daily basis the decisions are made where the competencies are. With a dedicated staff presence, there is no need to execute micro management. The cases only escalate to the project’s executives if they are grave or of principle character. The executive’s major task is to deal with changes in budget, time and quality and together with the rest of the Client Group the focus is on high-level performance.

The Client Group consist of approximately 60 people spread across different departments, the biggest being the Construction Department. With employees from many different backgrounds and cultures, the main challenge has been to align the staff to good practise. On a project of this scale, things have to be done in the same way. Recently, with inputs from the Client Group, an online tool on the project’s intranet was launched to help keep track of the methods and best practises within each of the project’s phases. Everybody is responsible for following the decisions and methods that have been agreed upon in the Client Group.

The project’s vision is to become European ‘best-in-class’. That means that the Copenhagen–Ringsted line has benchmarked its budget towards comparable European railway projects, carried out during the last 10-20 years. Based on this, the project has outlined goals for unit costs for relevant construction disciplines; first for bridges, tunnels, other constructions and earthworks/drainage. The benchmarking motivates to find the best-in-class size, content and procurement for all construction contracts.

Purchasing in a competitive market, utilising economy of scale and state-of-the-art technology were key parameters when the tender strategy was outlined. Banedanmark also decided to split the 60km-long railway up in smaller stretches called Tender Packages. The capacity in the Danish entrepreneurial market could be a stumbling block, so all tender material was written in English to attract companies within the EU. There was a clear foreign interest in the project, especially for the bigger packages ranging from €100-200 million.

We have struck some good deals on our Tender Packages, leaving the budget in good shape for the rest of the project period. This shows that we have approached the mission professionally and that our strategy works.

For the first time in Danish construction history, Banedanmark has imposed that both consultants and contractors have to deliver 3D-models in connection with tendering and bidding in relation to the new line. The intelligent 3D-models make it cheaper and more effective to construct the railway, as it reduces double work extensively and prevents costly mistakes during the construction phase. This has been a success to get everybody on-board concerning 3D-modelling, and Banedanmark has developed a Cad manual to ease the work for consultants and contractors.

The dawn of a railway

Due to be finished in late-2018, the new Copenhagen–Ringsted line has almost reached the halfway point. Preparatory works, archaeological surveys, contact with affected landowners and expropriation were on the agenda in the early years from 2010 to 2012, but in the spring of 2013, the Client Group could raise their hands, as the project entered the construction phase. Work started on two of the contracts – TP21 and TP2. In addition, several contracts were landed in the autumn of 2013. The last big contract will be signed in spring 2014 and the one for the new line’s sole new station, Køge Nord, will be awarded in 2015.

After the contracts are awarded, the Client Group hold kick-off seminars for the contractor, which contains subjects such as document handling, Cad protocols, communication and the project’s vision. The seminars have been a great success and have launched a straightforward relationship between client and contractors.

The Copenhagen–Ringsted line is on track according to time schedule and economy targets, helped by a continuous trust between the Client Group and the contractor, which is important if the project is to succeed. It looks promising for the time being, but it is important to stay focused and react quickly and correctly to problems that may arise during the construction period.

We have many different contractors, so it is imperative that we implement the same culture of trust and best-in-class mind-set to all our collaborators. Most of the contracts are Design and Build, so the contractors are responsible for the end product and permissions from authorities such as the Road Directorate and local municipalities. Our task is to engage in their methods and solutions and that is something we practise on every day.

One challenge concerning the Design and Build contracts is how the contractors deal with the regulations concerning railway safety, as the CSM method is quite new for them as design responsible. This is already on our radar and we will put a lot of effort in to support our contractors in the approval phase, but in the end, it is their responsibility to obtain the necessary approvals.

Investments in the past

With a budget of €1.2 billion the Copenhagen–Ringsted line is, over the past 20 years, only surpassed in scale and cost by the construction of the bridges across Storebælt (1997) and Øresund (2000) as well as the first and second phase of the Copenhagen Metro (2002 and 2018). At the start of the 1990s, the main railway lines were upgraded from a cruise speed of 140km/h to 180km/h.

In January 2014, the government and their supports agreed on Togfonden DK, a €3.8 billion fund for future railway projects in the coming 10-15 years, which fits very well with Banedanmark’s vision to double the passenger and freight usage by 2030. I am convinced that knowledge from the Copenhagen–Ringsted project will come in handy for future projects.

Handling interfaces and handing over

There are currently two major upgrading projects on the national railway network. Banedanmark will execute The Signalling Programme and the Electrification Programme by 2021. The purpose of the Signalling Programme is to replace the old analogue signalling system with ERTMS technology. Denmark will be the first country to carry out a countrywide implementation of ERTMS Level 2 – the newest European common signalling standard. The Electrification Programme will expand the catenary system for electrical trains significantly. Both programmes are key stakeholders for the new Copenhagen–Ringsted line and will deliver all railway technology except for the tracks. However, the most important stakeholder is Banedanmark’s Technical Operations Department. My colleagues and I will hand over the entire railway to Technical Operations when it is ready for use. When the line is finished it will be incorporated in the national railway network. 2018 cannot come soon enough!

Jan Schneider-Tilli has worked within the railway field for more than 20 years, and the past 15 years have been within project management. He has been employed as Project Engineer on the Øresund Bridge, the Great Belt Bridge and the Metro during the 1990s and as Project Manager on the Ringbanen, the S-tog to Roskilde (not executed), the KØR Project and The New Line Copenhagen–Ringsted. Jan was employed at DSB from 1992-1995, Carl Bro (Grontmij) from 1995-1996, Banestyrelsen/Trafikstyrelsen from 1997-2009, Femern A/S from 2009-2010 and since 2010 at Banedanmark for the New Line Copenhagen–Ringsted project.

Jan Schneider-Tilli will be speaking about the Copenhagen–Ringsted line project at Scandinavian Rail Development 2014. For details on other speakers, a list of topics on the agenda and information on how to book your delegate position, visit: www.scandinavianraildevelopment.com. 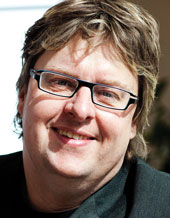