Shorter journey times, improved regularity and more frequent departures are the main objectives of Norway’s InterCity development, which comprises modern double-tracks between Oslo and the towns of Lillehammer, Skien and Halden. In total, the project consists of 230km of double-tracks, various constructions and 21 stations. The Norwegian National Transport Plan stipulates a planning budget of €25 million over the next four years, and the total investment cost is approximately €12.5 billion…

The InterCity area is Norway’s most densely populated region. To solve growing transportation demands, both for passengers and freight, the fixed strategy since the early-1990s has been to replace the mostly single-track network with modern double-tracks. Some sections have been built during this period, and some are currently under construction.

Population is on the increase and this trend is expected to continue. This strengthens the basis for focusing on modern rail transport: building sufficient road capacity to meet transport demands between regional centres is possible, but not in and out of Oslo. Giving priority to the InterCity network also contributes towards enlarging employment catchment areas, and relieves pressure on the region around the capital.

By passing the National Transport Plan, which is a framework plan for the 2014-2023 period, the Norwegian parliament commissioned specific network development and the basis for long-term service improvement in the InterCity area as follows: by 2024, double-tracks shall be completed between Oslo and Hamar, Tønsberg and just north of Fredrikstad. By 2026, Sarpsborg shall be reached, and some sections north of Hamar and south of Tønsberg completed to improve capacity. The aim is to complete the entire network by 2030.

The Ministry of Transportation has recently stipulated that planning of the Ringerike Line between Oslo and Hønefoss, which has not been considered part of the InterCity network thus far, shall also be incorporated in the project. This will take effect within the year.

Concept studies which were finished in 2012, established the following principles for the project:

Both criteria will help increase the demand for rail travel. The more passengers, the higher the investment benefits.

The project will be instrumental in making rail services more attractive and transferring daily commuter journeys from road to rail. It will become possible to commute over longer distances within acceptable daily travel times, and employment catchment areas will expand as a consequence.

Demand also depends on station access. The density of jobs, residences, businesses, cultural facilities, institutions of education, etc. within walking distance of stations is crucial. Consequently, passenger numbers are maximised when stations are situated centrally in towns and cities, as is the case with most stations within the existing network. Thus, the challenge when designing new lines will be to balance modern curvature specifications with costs and the drawbacks arising from connecting new lines with existing, city centre stations.

Secondly, passenger growth is also stimulated by promoting urban density and visitor intensive enterprises near stations. The trend in Norway has been that more and more people want to live within walking distance of public transport, which strengthens the basis for development around transfer hubs. Improved access and transfer opportunities from buses, cars, taxis and bikes, is another stimulant.

The means to strengthen development of station vicinities, and transfer hub functions and feeder services, are not Jernbaneverket’s alone. Cooperation with municipalities, counties and private developers is necessary to succeed. The initial project approach has been to establish agreement about which functions are desirable in and around transfer hubs, and to fix the responsibility for functions and tasks with the institutions in question. Cooperation agreements will be established to define the scope and timing of contributions.

Design speed will mainly be 250km/h, but deviations will be accepted to provide for city centre stations. The Østold Line is an example of having to balance speed with the need for servicing city centres. The location of two major towns, Fredrikstad and Sarpsborg, makes it impossible to service both city centres with the same line should high-speed geometry standards be applied at the same time.

In giving priority to servicing the cities, possible high-speed trains bypassing stations in the future will take 12 minutes longer to reach the Swedish border, compared to a direct line. This recommendation is in agreement with the High-Speed Survey which Jernbaneverket carried out in 2012, which concluded that a line servicing the cities should have priority, and that a more direct line should be a possible future development.

The network will also be designed for freight services. Increasing goods capacity on the Dovre and Østfold Lines is important for expanding the railway’s share of freight transport between Oslo and Sweden, as well as between Oslo and the northern parts of Norway. The Vestfold Line is adapted for goods services only as an alternative in case services on the lines serving the south of Norway are interrupted.

Predictability is the most important project success factor, particularly when it comes to financing. This is a basis for:

At the moment the project organisation is being established. InterCity will be the biggest planning project in mainland Norway for decades and the project has to ensure that the different sections can be planned and built in accordance with the Parliament’s commission. In order to succeed it is vital that tasks are not duplicated and decisions made only once.

A technical design basis is being established to provide standardised technical solutions, eliminating the need for such choices when designing individual sections. The next step will be a concept document which examines each geographic section to ensure that the infrastructure complies with requirements emanating from dimensioned goods and passenger traffic – functions such as stabling yards and electricity supply, the operations and maintenance perspective, etc. The unit responsible for the technical design basis and concept will not only produce the framework, but also contribute to planning and help supervise consulting engineers.

The same principle will be applied for transfer hub development. A separate project unit will devise strategies for defining responsibilities and establishing cooperation agreements, and take part in their practical deployment.

As planning progresses, more and more functions, such as land acquisitions, will be added to the project organisation.

Consultants and contractors will be crucial

The InterCity Project is responsible for carrying out the necessary planning, but the actual work will be contracted out to consultants. It is important that a sufficient amount of competent planners is available, not only within the InterCity organisation and the counties and municipalities in question, but also with the consultants.

Examples of challenging tasks include planning a possible undersea tunnel south of Tønsberg, complex railworks in Drammen and other cities, and choosing corridors through towns like Sarpsborg and Larvik.

The project contract strategy, which is currently being shaped, will determine the scope of the various planning contracts. This strategy will also define construction contracts and the management of the construction period. Even though the scope and type of contracts have yet to be decided, it is likely that there will be major contracts for both the Norwegian and international markets, and that there will be a number of exciting challenges within the fields of both planning, design and construction. The first sections shall be ready for construction in 2018.

Anne Siri Haugen achieved her degree at the Norwegian University for Science and Technology in 1991 after studies at the Faculty of Civil Engineering, mainly focused on subjects in planning and transportation, and a final task on railway investments. Anne has held different roles within the Norwegian National Rail Administration; in the consulting unit, in the constructing of the new station at the National Theatre and in long-term planning, mostly focused on the National Transport Plan. From 2010, she’s been fully occupied in the InterCity project and as a Project Leader for utility studies, and since October 2013 as the Project Director. 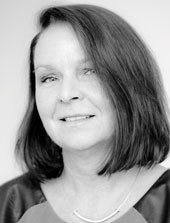