As Minister of Transport and Communications for Norway, Ketil Solvik-Olsen is concerned with improving people’s daily travel habits. For Global Railway Review, Ketil explains that since the Norwegian Conservative Party (Høyre) and the Progress Party (Fremskrittspartiet) came to power in October 2013, a process has been in place to make the country’s rail transport a better option both for passengers and freight, and that they have significantly increased the government funding of railways and started a process to modernise the organisation of the railway sector. Ketil writes that the Norwegian railway has a greater potential than what is utilised today, and something needs to be done about it…

As Minister of Transport for Norway, I am particularly concerned with improving people’s daily travel – the journeys that people make 200+ times a year. We wish to improve commuting facilities around the major cities of Norway, especially in Eastern Norway, where a largescale development of a new double-track is under way. The InterCity development project includes railway lines between the cities of Skien, Lillehammer and Halden through Oslo, as well as the new Ringerike Line between Sandvika and Hønefoss. These are major investments and projects that will take many years to carry out, but step one should be completed no later than 2024. The InterCity development will reduce travelling time and enable more departures. People will experience commuting in a completely different way and it will facilitate the expansion of suburban areas and commuter towns – more people will be within the one hour limit of how far people are willing to travel to get to work.

I want to develop railway services in areas where railway is the best option. In addition to the commuter traffic in suburban areas, there is also long-distance freight traffic. Here, maintenance is crucial. Many of these lines are more than 100 years old and fail to meet modern requirements. However, this has changed gradually over recent years. The need for more investments in infrastructure has become more and more evident, and allocations to both road and railway development have increased. Most people will agree that the population growth in the major cities require more funding of railways and other modes of public transport. Therefore, our government will continue to increase our spending, especially for maintenance of railways. We have established an infrastructure fund to ensure more predictable future spending on railways. Currently, the government spends approximately NOK 30 billion, and spending is scheduled to reach NOK 100 billion within five years.

Just as important as more money, is better organisation of the sector. The Norwegian railway needs a reform, which is well on its way, not just in the railway sector. One of the first things I did as Minister was to set-up a project within the Ministry of Transport and Communications to work on a major transport reform. The project has four sub-projects – one for railways, one for roads, one for funding and one which will look at a new scheme for the existing National Transport Plan – a 10-year plan which is produced every four years.

The aim of the railway reform is to make sure we have clear objectives, an effective governance structure and a commercially viable organisation of Norwegian railway services, in short: better train services for the money we spend. What’s most important is that the sector meets the needs of the passengers and freight industry. Customer orientation is therefore a key element in the reform.

Competition is also important, not least when it comes to operation of passenger transport. Fair completion makes the players more alert, which will benefit passengers. The Norwegian Government eagerly follows the EU debate and adoption of the Fourth Railway Package.

I believe foreign railway companies in the future will have an interest in operating passenger transport in Norway, but it requires a more solid rail network than what we have today. We need to build new lines and maintain the existing ones – a process currently underway.

In many debates, there is a tug of war between road and rail. Our approach is to see the entire transport system in context and acknowledge that the businesses and inhabitants of our country have different needs. The transport system must be developed according to these needs. Roads, railways, seaports and airports complement each other. The clue is to find the right balance, which ensures that the system runs as efficiently as possible for travellers. Some people live and work in places where a car is the most rational mode of transport. For others it will be a bicycle, or perhaps a combination of buses and trains.

Road development is important; we cannot escape this fact. However, I am equally concerned with improving public transport into the major cities, where railway services have its greatest advantage. However, we have to do it in a smart way, making the most of each Krone. This is a huge challenge, which is why we are in a hurry to get this work well on its way. 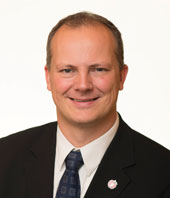 By Ketil Solvik-Olsen, Minister of Transport and Communications for Norway