The Swedish railway: with successes and setbacks

Rail in Sweden has been under the spotlight for the last 4-5 years, but the good news is that the Swedish railway is now transporting more passengers and cargo than ever before, reports Christel Wiman, CEO of ASTOC – the Association of Swedish Train Operating Companies. More and more people are dependent on the railway for commuting and going about their daily routines. But the increased traffic raises some negative issues, including a lack of capacity – not great when trains are already running on old and poorly maintained infrastructure due to a lack of investment over recent years. This causes traffic management problems – occurrences that passengers and freight owners of course do not want. 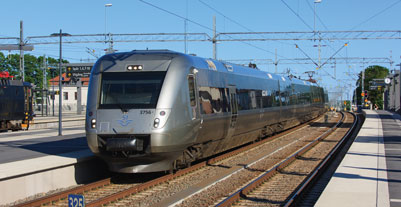 If Sweden did not have a railway network, it would not be the exporting nation it proudly is today. Sweden is still export-dependent of raw materials such as iron ore, steel and forest products from the northern parts of the country, requiring a well-functioning, efficient and competitive transport system. In the forest industry, the cost of transport is more than 20% of the product value – price and delivery are crucial for competitiveness.

During the 2000s, the Port of Gothenburg, together with freight operators and the Swedish Transport Administration, built up the ‘Rail Port System’. Today, approximately 50% of the freight to and from the port is transported by rail.

Today there are a number of bottlenecks on the tracks where freight and passenger traffic (both regional and long-haul) compete for room, with cargo trains spending many hours in ‘forest time’ due to the lack of capacity.

Sweden has had the fastest growth in railway passenger traffic in the EU for several years. Sweden also has the fastest growth in urbanisation in metropolitan areas, for instance in Stockholm. Urbanisation and regional expansion (regionalisation) have led to increased dependence on commuter trains. A sustainable and long-term social growth requires a well-functioning and sustainable transport system. Regional expansion which brings about a commuting distance of over 100km is dependent on railway solutions. Other advantages for railways compared to other modes include: reduced road congestion, less risk of accidents, and the fact that the railway requires less space.

The Railway Capacity Survey (2011-2012) – a general study of the state of the Swedish railways – was endorsed by the whole railway industry and thus unified the sector’s picture of the poor state of the infrastructure. However, issues such as high-speed rail and how to reach the climate goals were not answered in this particular survey. The future demand for railway capacity was greatly undervalued and it also lacked a future vision for the railway. The survey led to securing increased funding for maintenance – which of course was appreciated by all stakeholders.

Outspoken but truthful details about the railways’ lack of punctuality in recent times also led to the start-up of a new project called ‘TTT’ – an acronym for Together for Trains in Time.

All parties came together in cooperation to find out how the railway industry can contribute in different ways to raise its general effectiveness and punctuality. The goal is to increase punctuality from 91% today (+5 min) to 95% by the year 2020. So far the project has led to improved collaboration within the sector and a mutual and better understanding of what causes poor punctuality, apart from inadequate infrastructure.

A railway vision for Sweden

Despite all eyes now being focused on improving rail transportation, Sweden still lacks a national long-term vision of how the railway is supposed to contribute to Swedish society.

So, in 2014, ASTOC, together with Sweco – a consultant firm, decided to develop a railway vision known as ‘Railway 2050’ which looked at long-term growth in comparison with the expected GDP growth and forecasted community developments. The vision was presented in the summer of 2014 during the annual Swedish political week, called Almedalsveckan. The vision states that the railway, in general, enables Sweden to achieve environmental goals by increasing its proportion of sustainable transport. High-speed rail in Scandinavia plays a major part in the necessary development. Railway transportation facilitates urbanisation as well as regional expansion and thus contributes to continued economic GDP growth.

Railway 2050 proposes to extend double-tracks and to eliminate today’s bottlenecks. It also champions for a fully-developed Nordic high-speed rail network connecting the three Scandinavian capital cities (the Nordic TEN-triangle) which will strengthen the Nordic region and create a strong Scandinavian identity in Europe.

While ASTOC and Sweco worked on their vision, the government was simultaneously doing the same thing – in secrecy. Their investment package for the railway was presented during Almedalsveckan – the very same week as when ASTOC and Sweco revealed theirs. Sweden has long debated about whether or not to have a high-speed rail network, but the government now proposes powerful and quick investments in high-speed rail.

New high-speed tracks will also create additional capacity in the existing rail network for freight and regional commuter traffic. Today, an overwhelming majority of the political parties in Sweden share the same idea concerning the railway’s importance to Sweden and the importance of rapid investments in high-speed rail.

ASTOC’s mission to explain the railway’s role for society and economic growth may now be seen as fulfilled and completed. The next step is to ensure that all good proposals will be fulfilled as soon as possible. Financing will probably be the next big and challenging issue.

Sweden might be seen as a slow starter when it comes to high-speed rail, but now hopefully with these plans in place, the country can solidly move forward with its mind fully-set on high-speed rail investment.

Monopoly or market? That is the question

Railway organisation is another big and important issue – not just in Sweden, but all over Europe too.

A prerequisite for the free movement of people and goods within the EU is a good transport system which facilitates that. Interoperability on the railway network is thus one of the major issues, as stated in the SERA Directive.

In 1988, Sweden’s railway infrastructure organisation was separated from the railway operating company. The reason at the time was economic, not political. The owners found it difficult to control SJ (the national railway company) when SJ had total responsibility and a never-ending requirement for more money.

Subsequently different parts of the railway operation have gradually been sold out and today the market is de-regulated and an open market, still with strong national or regional ownership.

Sweden has left the monopoly behind and thus deviates from the monopoly which still is more or less common in most other countries. Role models for a liberalised railway are few in the world.

A new government study of the organisation

The way that the railway sector is organised in Sweden needs a ‘follow-up’ and is now set for a government study. The assignment is to evaluate the effects of the deregulation, analyse the effects of state ownership and to propose changes and point out necessary steps to develop tomorrow’s railway organisation. The investigator will present the results in mid-2015.

Before then, there will be national elections in Sweden and the political parties have different views on state ownership. However, an overwhelming majority is positive towards the development of a modern railway.

Passengers and freight owners are winners in a deregulated market. However, changes in the organisation of the railway sector also create new kinds of problems to be solved. The key is to know what kind of empowerment, limitations, responsibilities and authorities are needed in the chosen kind of organisation.

The future role of ASTOC

ASTOC’s new role emerged during the 2000s. It became increasingly clear that a railway industry with several actors needs to replace the monopoly with industry collaboration. The railway sector might also need more interaction and collaboration than other industries. The need to develop operating rules, common traffic management, code of conduct, trade insurance, standardised contracts and other standardised solutions is ahead of us. The old monopoly must be replaced with a new and general industry-identity. The common identity is vital, especially in the lobbying.

EU and the liberalised railway market

The Swedish model of railway organisation seems to be appreciated by the EU Commission, but perhaps not in all member countries.

However, many EU decisions today can create new obstacles when trying to solve old problems. ERTMS is one such example; the roll-out of which may be fatal to a new and liberalised market if it does not take into account competition between the actors in the market. The EU should always bear in mind how new regulations will affect the liberalised railway market.

Christel Wiman studied at the University of Stockholm and graduated with a Bachelor of Law which included court-training. She was Department Manager and Head of Negotiations for the Swedish Hotels & Restaurants Association, before being Head of Negotiations at Swedish Post, and the CEO of the Port of Stockholm Group. Christel has been CEO of ASTOC – the Association of Swedish Train Operating Companies – since 2012.

By Christel Wiman, CEO of ASTOC