The Semmering Base Tunnel: powerful and future-oriented

The Semmering Base Tunnel is one of the most important long-term large-scale infrastructure projects in the Austrian and European high-capacity route network. Through the 27.3km-long tunnel between Gloggnitz and Mürzzuschlag, a sustainable investment is being made in both Austrian and international rail transport. In the long-term, the Semmering Base Tunnel will not only relieve the ‘Semmering-Bahn’ UNESCO World Heritage Site, but also enable a faster, more attractive freight and passenger transport service – powerful and future-oriented. Gerhard Gobiet, Project Manager at ÖBB-Infrastruktur AG, gives a construction overview of this huge project… 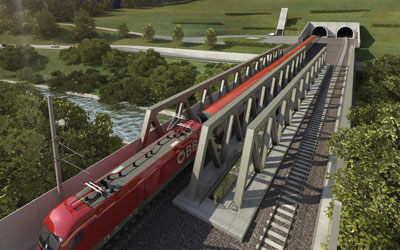 The tunnel not only eliminiates a bottleneck within Austria, it is also a key project within the European intermodal transport system: the Semmering Base Tunnel is located on the Austrian section of the Baltic-Adriatic Corridor from Gdansk (Poland) to Ravenna (Italy) and is thus a part of the European core network.

The Semmering Base Tunnel is one of the most examined infrastructure projects in Austria. The Federal Administrative Court has oncemore verified environmental sustainability of the tunnel project. As a consequence of protests in authority procedures, construction stopped for several months for the Semmering Base Tunnel. Now, with the decision of the Federal Administrative Court, the construction work can go back into full swing.

The Semmering Base Tunnel is being built in three sections. Construction of the middle section ‘Fröschnitzgraben’ has already begun: the consortium Implenia/Swietelsky is currently constructing the two +400m-deep shafts. They will later supply and dispose of all four tunnel drivings – two in one and two in the other direction. For the operational phase, an emergency stop is established which is supplied with fresh air via a separate operation building. The Fröschnitzgraben tunnel section is approximately 13km-long.

The excavated material from the tunnel and shaft structures is transported to the Longsgraben landfill with a capacity of 4,25 million m³. About three million m³ of the resulting material is transported eco-friendly directly via conveyor belts to the landfill.

The second tunnel section ‘Gloggnitz’ starts in summer 2015. The bidding consortium Implenia, Hochtief Infrastructure and Thyssen has awarded the contract in an EU-wide tender. The Gloggnitz tunnel section represents a major structural engineering challenge due to the drilling through the two water-bearing carbonate sticks. For the construction of this stretch an intermediate heading is being built in Göstritz, consisting of a 1,000m-long access tunnel and two 250m-deep shafts. After the outbreak of the cavern necessary for the construction, conventional tunnelling operations are planned from this intermediate heading in the direction of Gloggnitz and Mürzzuschlag.

The building of the third tunnel section ‘Grautschenhof’ will start in 2016. Detailed planning has been completed. At the Grautschenhof intermediate heading, a 1,400m-long access tunnel is being drilled into the mountain and at the end of it a cavern is being built. The section is being tunnelled towards the portal area in Mürzzuschlag and towards the intermediate heading Fröschnitzgraben.

Before the tunnelling work could begin, comprehensive studies on the nature of the mountain range were necessary. This was completed by test-drilling along the route. These studies formed an important basis for the determination of the pipeline route and the optimisation of the lines, in order, for example, to avoid fault zones accordingly and to consider these in the pipeline route. The geological knowledge and its geotechnical interpretation were also simultaneously the basis for the selection of construction methods to be provided for the tunnel.

The geology conditions of the Eastern Alps include a variety of different rock types, which affect the choice of construction method. The Semmering Base Tunnel was divided into different sections, in which either cyclic or a continuous tunelling takes place.

With cyclic tunnelling the material is excavated by blasting or dredging. After each blasting or release operation the cavity is secured with shotcrete, steel reinforcement and anchors. In this way, the tunnel grows piece by piece.

With continuous tunnelling the drill head of a 200m-long tunnel boring machine (TBM) digs through the rock. The securing of the tunnel is performed with prefabricated concrete parts. Due to geological reasons, this construction method is only applied in about one third of the tunnel – from the intermediate heading Fröschnitzgraben in direction to Lower Austria.

In March 2005, ÖBB-Infrastruktur Bau AG was commissioned with the planning of the Semmering Base Tunnel. Key requirements were the inclusion of planning and investments up to this point, as well as ensuring the lowest possible track incline.

Based on geological and hydro-geological exploration and an in-depth study of the nature and settlement in the project area, the most suitable route was selected from 13 possible variants.

Co-operation with residents in the catchment area as well as of the federal states and the communities was essential here. This co-operation made a fully transparent planning process possible, which largely determined the joint development of an optimal overall result. The new Semmering Base Tunnel also required an Environmental Impact Assessment (EIA).

Throughout the submission phase citizens from the region were involved in the development of the project. Drawing on the expertise of these various stakeholders, route alternatives were developed and presented as plans. The proposed routes were tested professionally and evaluated. The assessment of the experts was based on a five-part grading scheme. The stakeholders also actively contributed to this selection process. Following the announcement of the selected route in the spring of 2008, the working groups began work on the concrete planning of the route.

As early as the planning stage of the Semmering Base Tunnel, care was being taken to ensure the interference with nature and natural habitats was done in the most environmentally-friendly and gentle way possible. Extensive studies throughout the project area on the possible effects on space and the environment constituted a substantial basis for the planning of the construction works. Organisational and structural measures to minimise disturbance during construction are primarily the reduction of noise, vibration or air pollutants in the nearby residential areas. In the operating phase, a reduction of the disturbance has been achieved through noise protection measures both aboveground and integrated in the tunnel. Agriculture and forestry reclamation work will finally reach their full effectiveness.

Since 1998, the railway route across the Semmering has been a UNESCO World Heritage Site. To review the compatibility of the Semmering Base Tunnel with the existing World Heritage Site, the Bundesministerium für Unterricht, Kunst und Kultur (BMUKK) (Federal Ministry for Education, Arts and Culture) asked the UNESCO World Heritage Centre for the appropriate review. The review found that with the establishment of appropriate measures, the tunnel project would not affect the exceptional universal value of the World Heritage Site. As one of these measures, UNESCO recommended a project-related historic preservation supervision for the detailed planning and implementation of the Semmering Base Tunnel. The design committee, consisting of experts in the fields of architecture, urban planning and landscape architecture, civil engineering as well as preservation and care advises the ÖBB on the architectural design of engineering structures and systems for the whole Semmering Base Tunnel construction. Furthermore, since March 2011, quarterly to semi-annual meetings are held in which the current designs are discussed.

The Semmering Base Tunnel – project overview

Gerhard Gobiet Studies Construction Engineering at Graz University of Technology (1987–1994). After working in Traffic Planning Departments of a Civil Engineering Office, and as Head of Service Purchasing at HL-AG, Gerhard moved to ÖBB-Infrastruktur AG in 2004 where he is now Project Manager with experience working on the Semmering Base Tunnel, the two-track expansion Werndorf–Spielfeld, the Koralm Line Werndorf–Wettmannstätten, and rail power supply Graz–Werndorf.