Oliver Mietzsch, Managing Director of ZVNL, investigates the organisational structure and financial regulation of regional rail transport in Germany and evaluates its efficacy… 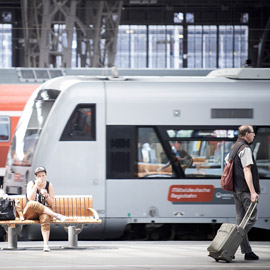 ‘The extent to which financial liability and decision-making powers are shared between central government, states (regions), local authorities and transport companies varies considerably according to the country and even within countries’1. Public authorities are the main contributors to the funding of public transport in terms of operations and – in most cases to a similar or even larger extent – also with regard to infrastructure investment. This is almost exclusively the case for continental Europe which, with only a few exceptions, has a decentralised political structure2. This applies in particular to Germany, where central as well as regional and local government fund infrastructure investment and operational costs mostly out of the public purse. This article investigates the organisational structure and financial regulation of regional rail transport in Germany and evaluates its efficacy.

In 1996 the former state run rail companies of East Germany (Deutsche Reichsbahn) and West Germany (Deutsche Bundesbahn) were formally merged into German Rail Inc., a state-owned but commercially organised integrated mobility and infrastructure supplier with a holding structure. In accordance with the newly defined legal base of rail transport in Germany, the notion of ‘customer-operator’ was established with relation to regional rail transport. The Länder (regional state level in Germany) became the competent authorities for regional rail in exchange for a fixed annual federal budget, in order to pay for the operational costs. Some Länder, such as North-Rhine Westphalia, Rhineland-Palatina or Saxony, further dissolved competences to the local level. However, the majority of German Länder retained this task on the regional level, thereby establishing public limited companies to cope with the daily work. In total there are 27 regional or local competent authorities currently responsible for regional rail transport in Germany. Organisational sizes range from large entities, such as the Bayerische Eisenbahngesellschaft (competent for the whole of Bavaria) or the Verkehrsverbund Berlin-Brandenburg (the merged regional rail authority of the two German Länder of Berlin and Brandenburg), to smaller locally based authorities, such as the Zweckverband Großraum Braunschweig or the Zweckverband für den Nahverkehrsraum Leipzig (special purpose authorities of the Greater Brunswick Region, specifically the Leipzig Area).

In Germany the farebox recovery rate of public transport operators on average amounts to approximately 77%3. This, however, does not necessarily result in less financial involvement from the central or regional state level, since there are several funding instruments that are largely paid out of the public purse4. These include compensations for reduced fares for students or socially disadvantaged people; free transportation for handicapped people; and tariff integration measures within transport groups.. Concerning the operational costs of regional trains the German Federal Government (until 2015) payed compensation on an annual basis, including an inflation rate of 1,5% directly to the appropriate Länder. The Länder, either directly or via local or regional transport authorities, then compensate the train operators by way of public tendering; in 2014 a total of €7.3 billion was provided this way5. However, this falls far short of being sufficient. To make matters worse, the federal budget for local and regional rail operations (which to a lesser extent can also be used to cover infrastructure costs) had suffered dramatic cuts between 2006 and 2009 totalling €2.3 billion. In September 2015 the German chancellor and the prime ministers of the Länder agreed in principle on a new funding structure for regional rail transport for the following 15 years. They also announced that federal budgets for larger regional and local public transport infrastructure investments will be upheld after 2019. According to this agreement the federal government will increase the annual compensation payments to the Länder to €8 billion from 2016 onwards and will also adjust the annual inflation rate to 1.8%. In total, this will add another €12 billion to the system until the year 2030. The horizontal distribution among the Länder, however, is still pending. In October 2014 the Länder agreed on a new horizontal distribution scheme taking into account the growing financial needs of certain areas – particularly in parts of Western Germany, where the population – and hence transport needs – are rising. They did, however, expect the Federal Government to pay at least €8.5 billion a year and assumed an annual inflation rate of minimum 2%. Only under these circumstances the future share of East German Länder would by and large have remained unchanged compared to a mere continuation of the existing distributional scheme.

In its expert opinion report on the future of public transport funding in Germany6, the Scientific Advisory Council for Transport of the then Federal Ministry of Transport, Construction Industry and Housing has come to the conclusion that public transport in Germany faces important structural changes. This is primarily due to the fact that existing funding sources (such as subsidies for the operation of student and pupil transport7 and, more importantly, state aid for public transport infrastructure based on the Act on Federal Government Aid to Improve Transport at the Local Authority Level (GVFG)) are already running dry and will end altogether by 2019, when a complete reshuffle of the federal and regional financial relationship is scheduled8. However, merely enabling more money to flow into the system does not solve the structural problems of Germany’s financial compensation schemes for both infrastructure as well as operating costs of public transport. Instead, clear responsibilities between funding and regulative competences are needed. Currently, when it comes to funding operating costs for regional rail transport, the Federal Government acts with double standards. With one hand it pays billions of euros directly to the Länder for funding regional rail transport, yet with the other hand, via the state owned German Rail infrastructure companies, it redirects hundreds of millions of euros back into the Federal purse. According to the Competition Report Rail 2013/2015, published by the association of privately owned railway companies in Germany (Mofair), the purchase power of the Federal funds for operational costs of regional rail transport has reduced from 42% in 2002 to 30.5% in 2012 – yet in the same period of time the total funds increased from €6.5 billion to €7.1 billion. This effective reduction of financial means available for running trains is solely due to an increase in infrastructural costs for railway network and station usage. Since rail infrastructure is an essential facility that cannot be replicated, and owing to the fact that, according to German law all rail infrastructure costs must be paid off by operating income German Rail, infrastructure companies have no incentive to reduce costs. One might even argue that the more German Rail has lost operating contracts to competitors the more German Rail infrastructure companies have increased their fees for using the railway network and the stations. Without a fundamental change in this context, there will never be enough money for running regional trains.