Can Europe learn from the barriers faced by Britain’s railway? 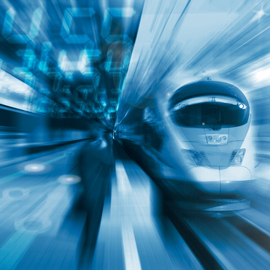 The rail industry has been plagued by a myriad of challenges over the last 20 years that have prevented customers from benefiting from cheaper fares, paperless ticketing, more efficient communication methods and an overall better customer service.

Everyone has their individual judgement of the industry’s flaws, claiming that the franchising model doesn’t work, data is too fragmented, or that the culture in rail is unsuitable for innovation… they have all been right, but have also fallen short of truly understanding what exactly is wrong at the industry’s core, and more importantly, coming up with working solutions for the problems in industry.

We’ve worked with 5 of the major transport owning groups and leading startup companies to introduce new innovations within the rail industry at speeds never before seen.

In just 4-12 weeks we installed hardware on trains and in stations whilst also deploying code on websites and apps. Solutions addressing passenger loading and station congestion were trialled on live trains and key stations throughout the network during our 3-month innovation programme designed to get the rails moving quickly again.

This is why we embarked on a 6-month journey to write the B.A.R.R.I.E.R.S. report (Bringing Actionable Recommendations to Revitalise Innovation and Entrepreneurship in the Rail Sector). The report analyses the key commercial, data, cultural, procurement and funding barriers that prevent rail in Great Britain from taking advantage of new technology.

After conducting more than 60 interviews over the course of 6 months, the report has identified 5 key barriers:

Once a franchise is agreed, there is no more competition and hence no pressure to innovate because the franchise contracts have input-oriented specifications. In addition, investment takes place early on in the franchise to get maximum value for money out of, meaning there is not much change during the final years of a franchise and customers notice. Interestingly, the Innovation in Franchising Fund administered by RSSB is one of the several attempts to drive innovation. However, the opportunity is hindered by several administrative and bureaucratic barriers that prevent it from fulfilling its full potential. Read the ‘Franchising’ section of the B.A.R.R.I.E.R.S. Report to find out more. The ability to access contracts is difficult and to get non-safety critical technology off the ground is difficult and long-winded. There is no clear process for trialing non-safety critical technology and there are limited resources for those technologies to be tested. Moreover, procurement cycles can take 8-12 months which makes the rail industry very hard for startups and entrepreneurs to enter. Such uncertainty of the industry can really detract the best talents from the industry.

In the rail industry, open data feeds like Darwin and LENNON are unreliable and there is no documentation for developers. Technology contracts inhibit innovation partly because they have unreasonable data ownership constraints. Also, the processes to measure customer satisfaction are inaccurate and inefficient. For example, the National Rail Passenger Survey (NRPS) ran by Transport Focus is the primary source for customer feedback data collation. This survey is paper-based that has received 54,557 responses in 2015, when there are 1.5 billion rail passenger journeys in 2014/15, representing 0.0033% of the journeys taken. Updated (Summer 2016): the survey has now been changed to four pages long, which is meant to be a massive reduction of questions from the previous survey.

Mindsets have to change so that rail is seen as a service that needs to keep up with the rates of innovation in other industries to remain viable. It is vital that train operating companies listen to their customers, otherwise they face being left behind. In order to make a permanent change, Hack Partners have created 6 key actions that needs to be taken such as being more proactive, driving ownership of innovation, rewarding disrupters and innovation leaders, and embracing technical aspects of the rail industry. To read more about the other key actions, check out the ‘Culture Change’ section of the B.A.R.R.I.E.R.S. Report.

We haven’t just identified these barriers; we’ve come up with tangible recommendations on how to improve the industry. To highlight a few, we recommend that there needs to be an innovation centre for rail and an innovation manager within all train operating companies. We question if the safety board should really oversee innovation – a move recently also made by European Rail!

We’ve suggested the Department for Transport to commission a ‘Data in Rail’ report to get an understanding of the state of data in this industry. There should be one industry-wide monitor of customer satisfaction levels that works in real-time as opposed to Transport Focus’ monolithic NRPS which takes place every 6-months. Finally, grants should also be handed out differently as opposed to the current method of giving most of the money to large companies.

You can read the whole report at report.hacktrain.com.

One response to “Can Europe learn from the barriers faced by Britain’s railway?”