In this article Stasys Dailydka, Director General of Lithuanian Railways, explains how the company is investing funds to improve and extend railway infrastructure in the region. 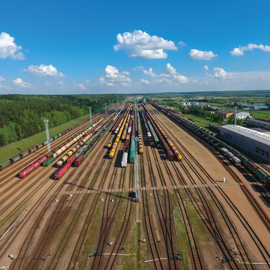 The Lithuanian railway company AB Lietuvos geležinkeliai (hereinafter – Lithuanian Railways) is a commercial company managed by the State. The principal purpose of Lithuanian Railways is to generate added value (i.e. revenues to the State) from freight carriage by rail. Lithuanian Railways earns most of its revenues from international rail freight operations. Passenger carriage is a loss-generating function of the company, which it is obliged to perform, however, for the benefit of public interest. In this article Stasys Dailydka, Director General of Lithuanian Railways, explains how the company is investing funds to improve and extend railway infrastructure in the region.

In the region of €770 million – or more than 59 % – of total investment was allocated to railway transport. The largest projects, both in terms of scope and value, are those implemented by the State and are partly financed by EU funds.

Plans for the future are equally ambitious with a total of approximately €750 million intended for investment in the development of railway infrastructure, and maintaining its technical level.

Accomplishments and the forthcoming projects

2015 was the year that Stage I of the Rail Baltica project was completed, including construction of the second track and electrification of the railway.

Lithuanian Railways is currently at the stage of preparing – or has begun implementing – the following projects under the 2014-2020 EU financing period: Undoubtedly, once the projects are complete the performance of the railway operators will become much more efficient; however, this is not the main benefit of the projects. The most important outcomes of the projects are their benefit to society with a view to improving the social and ecological environment of the region.

The Rail Baltica project in Lithuania was implemented with support from the Connecting Europe Facility. The only missing link to complete Phase I of the project is a European-gauge railway line in the Kaunas bypass (Jiesia–Rokai–Palemonas), and from the Kaunas railway station to the Logistics centre in Palemonas. In order to complete the project, the European Commission allocated funding from the EITP fund, which accounts for 85 % of the total investment; the remaining investment requirement is to be covered by Lithuanian Railways.

Furthermore, based on international agreements the Rail Baltica project will be organised and implemented by an entity set up by the three Baltic States. The three States – Lithuania, Latvia and Estonia – established an international infrastructure, 85% of which is financed by the European Commission. A joint company established by the three Baltic States in Latvia will build a European railway line from Palemonas to Latvia; a European gauge link between Kaunas and Vilnius; and install a signalling and traffic management system (ERTMS). The project is due for completion by 2025. The value of the works in the territory of Lithuania alone accounts for approximately €3 billion (excl. VAT). Lithuanian Railways has been consistently investing in the systems ensuring the safe traffic of trains. In autumn 2016 the company installed signalling systems at 10 level crossings at the Rail Baltica section from Kaunas and Lithuanian and Polish state borders.

On 7 September 2016 a decision was made to transfer the ERTMS  installation functions to RB Rail. It is vital that RB Rail install the system as soon as possible, as that will shorten the duration of the 123km-long trip from Kaunas to Poland to just one hour. The ERTMS will also ensure the fully-fledged operation of the Rail Baltic line and of the Kaunas public logistics centre. Once the signalling and traffic management systems are installed at the Rail Baltica line – was provided for in the recommendations of the European Railway Agency – the speed of the passenger trains between Kaunas and the Lithuanian-Polish state border will be increased to 160km/h, and to 240km/h after modernising the entire line.

An electrified line will connect Vilnius and Minsk

Lithuanian Railways has been consistently dedicating significant attention to electrification projects directly related to the mitigation of greenhouse gas emissions. Between 2015 and 2016 Lithuanian Railways proceeded with the electrification of the section from the state border with Belarus–Kena–Naujoji Vilnia. The purpose of the project is to shorten the time of a trip from Vilnius to Minsk to two hours. The electrification will improve the economic indicators of railway carriers (due to reduced costs for electric resources and increased capacity of traction units), thus directly addressing ecology-related issues. The electrification of the railway network would create the opportunity to shift from fossil fuels to the use of renewable resources in the railway sector. This would alleviate the environmental impact of railways and increase its attractiveness to passengers, while using environmentally-friendly rolling stock for rail freight.

A modern infrastructure – advantageous for business

In the course of the past several years, the volumes of freight transportation by rail have significantly decreased in the Asian and Eastern European regions. Significant decreases in rail freight operations were also recorded in the states neighbouring Lithuania, intensifying competition between rail companies of Central and Eastern European regions for rail freight.

In that highly competitive environment, Lithuania still manages to maintain its position, mainly due to its convenient geographical location, as well as highly attractive business climate. Significant efforts are made to promote long-term cooperation with enhanced attention to the improvement of existing services and the creation of new ones. Our recently renewed locomotive fleet is one of the most modern in Eastern Europe. We use 44 locomotives (Eurorunner 20 CF from Siemens); manage a fleet of more than 8,500 wagons; and there are on-going initiatives to expand and modernise the loading yards including their technical equipment. Currently Lithuanian Railways operates 68 stevedoring stations, of which 10 are adapted for handling bulky freight.

The two modern intermodal terminals that started operating in 2015 in Vilnius and Kaunas enabled Lithuanian Railways to offer its customers safe, regular, less polluted and highly expedient operations, as well as handling of the freight travelling both East-West and North-South. The terminals opened new possibilities to enhance the mobility of freight; use vehicles more efficiently; improve the quality of customs services; reduce rail freight costs; and cooperate with companies operating in a large variety of sectors. The terminals are located close to the airports, which allows the three different transport modes to be integrated.

Šeštokai railway station plays a very special role in the implementation of the national significance infrastructure projects funded by the European Union. This includes Rail Baltica, also part of the expansion of rail Corridor No. 8 of the Rail Baltica project (Bremenhafen/Roterdam/Antwerp–Achen/Berlin–Warsaw–Terespol/Kaunas).

Every effort is made to maintain our traditional markets – Belarus, Russia, Latvia, Poland, Kazakhstan and Ukraine – while simultaneously expanding our operations in the Scandinavian, Western European and Black Sea Basin countries, as well as China. For the convenience of our customers we operate our representations in Russia, Belarus, China and Kazakhstan – an additional representative office will shortly open in Poland.

It is worth mentioning that Lithuanian Railways is consistently upgrading its facilities. The cutting-edge technologies, modernised traffic management centre and installation of electronic means significantly accelerated our operations and contributed significantly to the improvement of the quality of customer services.