SBB – on track towards energy efficiency

Travelling by train uses four times less energy than driving a car and utilises 90% hydropower too. Swiss Federal Railways AG (SBB) already makes a major contribution to sustainable mobility – and will continue to do so in the future. However, it also remains the largest consumer of electricity in Switzerland and, due to the ongoing expansion of services, still more traction power will ultimately be needed. This article, from Oliver Johner, Head of SBB’s Energy Saving Programme, addresses the ambitious plans of the Swiss rail company to achieve greater energy efficiency. 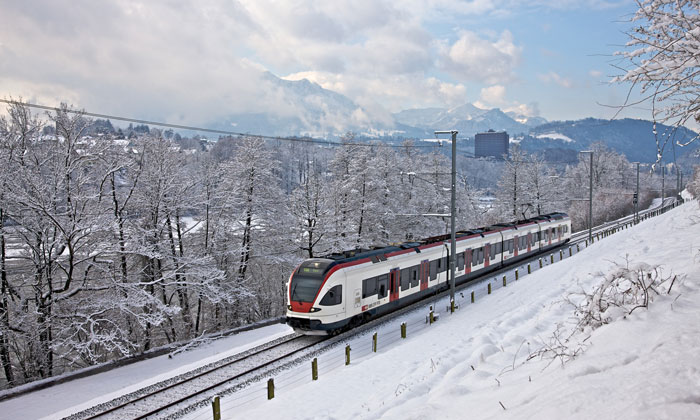 SBB is aiming to save 20% of its anticipated annual energy consumption for 2025, equivalent to 600 gigawatt hours. For this purpose SBB has implemented a comprehensive energy saving programme. Adaptive control (ADL) holds great savings potential. This software calculates an energy-optimised driving profile for all trains that also has a positive effect on timetable stability and punctuality.

Rail is the backbone of sustainable mobility in Switzerland. Swiss Federal Railways AG (SBB) transports 1,210,000 passengers and some 205,000 tonnes of freight every day in a manner that is both energy efficient, climate-friendly and safe. With an average of 90% hydropower in the traction power mix and a completely electrified network, SBB is one of the most environmentally-friendly railways in Europe. From 2025 trains are set to run on electricity generated entirely from renewable energy sources.

At the same time, however, SBB’s energy consumption is rising due to the expansion of services as well as heavier power-hungry rolling stock. Within the framework of its energy strategy and energy saving programme, SBB is aiming to reduce its anticipated annual energy consumption for 2025 by 20%. This is equivalent to 600 gigawatt hours or the annual energy consumption of 150,000 households. To reach its ambitious energy-saving target, SBB is reviewing the savings potential and implementing energy-saving measures throughout the company and along SBB’s entire value chain. Some 25 specialists from various disciplines are currently responsible for the implementation of over 250 economically viable measures.

SBB produces a large portion of Switzerland’s traction power (16.7 hertz) as well as a portion of regular electricity (50 hertz) with 13 own power stations and frequency converters. The company’s own annual production amounts to approximately 2,000 gigawatt hours. SBB sells this to the railway companies and internal departments.

However, in contrast to the Swiss 50 hertz power grid, where the actual energy consumed is charged, traction power use is charged on a flat-rate basis. This is based on train weight, mileage and average consumption values according to train type – for long-distance, regional or freight trains. The disadvantage of this method is that investments in energy efficient vehicles and an energy efficient driving style are only rewarded indirectly. This is where the usage-based billing of traction power (VVB) comes in. With VVB, in future the railway companies will only pay for the actual traction current consumed. Investments in energy efficiency thus mean immediate savings for the respective company.

In order to measure the trains’ actual power consumption, SBB is in the process of equipping its entire locomotive fleet with electricity meters (due to complete by 2018). In addition, important data for billing such as the vehicle number are transmitted by the SBB Rail Control System (RCS). Charging only actual traction power consumption began in autumn 2015. For vehicles without an energy meter, billing is calculated as before on a flat-rate basis.

Anchor energy efficiency in the company

With its energy-saving programme, SBB also intends to initiate an internal process of change and a cultural shift among its employees. The careful, and therefore economical, use of resources should be part of daily professionalism. Ultimately, saving energy relieves the burden on the environment as well as the budget.

Railway operation measures include an energy efficient driving style (EcoDrive), which the locomotive crew are extensively trained in, and the use of driving recommendation systems such as adaptive control (ADL). Unnecessary stops at red signals not only cause wear to the rolling stock and tracks, but also have a negative effect on a train’s energy efficiency and energy costs. Just starting up a heavy train uses a lot of energy. A freight train weighing 1,000 tonnes utilises as much energy slowing from 80km/h to a standstill, then starting back up again, as a household uses in a week.

ADL is an extension of the SBB Rail Control System (RCS). It detects train-dispatching conflicts and calculates the optimal speeds that enable trains to reach their destinations without unplanned stops and with the greatest possible energy efficiency. The rail traffic dispatcher in the train-control centre authorises the driving recommendations, which are immediately transmitted to the locomotive crew. However, these are just recommendations and not firm instructions. External signals continue to remain fully valid.

At present almost 1,700 trains are directed using adaptive control on weekdays, saving 150,000 kilowatt hours a day (average value for November 2016). Over the course of a whole year this equates to the energy consumption of 13,500 households.

ADL also helps SBB maintain its punctuality levels despite higher volumes of traffic and an increase in construction and maintenance work, all while reducing its energy consumption. For this, SBB was awarded the Watt d’Or energy prize by the Swiss Federal Office of Energy (SFOE) in 2016 in the category of energy efficient mobility.

The HVZ-D peak-hour fleet of Zurich S-Bahn trains are used for additional capacity for only a few hours each day, when the largest number of passengers are on the move around Zurich. Thanks to FBB, the heating systems in the vehicles are now linked to the daily timetable. This way, the vehicle knows when it will next be in service, enabling it to heat up automatically at the required time. This saves SBB five gigawatt hours a year without customers even noticing. At the UIC Sustainability Conference in Vienna in October 2016, SBB’s FBB project won first prize in the sustainability category.

Until now, primarily oil-cooled transformers with active cooling have been used on railway vehicles. Today, so-called dry-type transformers without oil can also be implemented. By omitting the oil, the active masses of the conductor materials can be increased, which reduces loss. Less loss means less waste heat, so that a simple air cooling method is sufficient for heat transport. The new Resibloc dry-type transformer represents a pioneering innovation in railway technology: Swiss South Eastern Railway’s (SOB) FLIRT achieved significant traction energy savings of over 7% of the vehicle’s overall energy consumption; the Mariazell Railway trains in Austria showed savings of over 8%. The dry-type transformer also reduces maintenance requirements, such as checking and changing the oil and all the related sensors. In addition to saving energy, this reduces the life-cycle costs of a vehicle with dry-type transformers even further.

By implementing load management, SBB aims to smooth out peak loads and thus counteract the projected peak load increase. This system entails purposefully disconnecting loads during a peak, or reducing their power drain. In the traction power network the annual maximum load typically occurs on cold winter days at peak traffic times. During this time the majority of all train and point heaters are switched on. If the load in the traction power network approaches a defined threshold, the central load manager switches off the heaters for a short time. For the duration of a typical peak load (<2 minutes), turning off the switchable heating power lightens the demand on the traction power network. The feasibility of load management by controlling train coach heaters was confirmed in a study on a pilot train. Load management’s goal is to regulate 150 megawatts of power by 2025. The first stage with heaters is being implemented and will regulate approximately 70 megawatts of switchable load by 2023. This has no effect on the customers’ travel comfort.

With a comprehensive package of 250 economically viable measures, SBB plans to save 20% of its anticipated annual energy consumption by 2025, or a total of 600 gigawatt hours per year. From 2025, trains are also set to run on electricity generated entirely from renewable energy sources.

This also makes financial sense: These measures save SBB up to CHF 60 million a year in energy costs over the long-term. Additionally, taking energy efficiency criteria into account will play a decisive role in the development of services.

Increasing energy efficiency is therefore of great strategic relevance for SBB. It forms the basis for securing rail’s environmental advantage over road in the long-term. In this way, SBB plays a key role in implementing the federal government’s Energy Strategy 2050 and developing sustainable mobility in Switzerland. Oliver Johner obtained an MSc in Geography from the University of Bern, Switzerland. His professional experience is in the areas of corporate responsibility, sustainability strategy and resource management as a Consultant at the United Nations and in the industrial sector. He has been Head of SBB’s Energy Saving Programme since 2015.