On track for the future?

Young Tae Kim, Secretary-General of the International Transport Forum (ITF) considers the role that rail will play in this period of ‘great transport transformation’.

DOES the transformation of the world around us open up the prospect of a new golden age for transport by rail? How exactly the revolution will play out is impossible to predict. Yet business leaders and policy-makers do not have the luxury of an historian who can judge events in retrospect – they must ‘ride the tiger’, adapting to, and shaping, change as it happens.

Two known aspects of the great transport transformation can serve as starting points for decision-makers. The first concerns behavioural change. Today’s users no longer want to be transported, they want to be mobile. They are less and less willing to submit to mobility patterns dictated by others, for instance operators. Instead, users long for transport options that give them maximum control over their movements.

The second aspect is technological. A digital revolution is sweeping all sectors, not least transport. Apart from the engineering changes digitalisation brings, this development also interacts with behavioural changes, creating something truly transformative: Digital connectivity empowers users to decide between different offers in real time at a swipe and a click. And it enables operators to create business models that offer extremely flexible mobility solutions.

The rail sector faces an inherent disadvantage in this paradigm change, for a trivial reason: Trains are confined to tracks. Other modes operate on fixed routes and fixed timetables, but they are not technically constrained to do so. Soon buses could swarm cities on algorithm-optimised trajectories, picking up smartphone-equipped passengers on demand at ephemeral stops.

But rail’s constraint also creates digital-age opportunities. The first is automation. It is much easier to make trains run automatically than a car or truck, or plane or ship – the variables that need to be controlled are a fraction of those in other modes. Self-driving cars are currently at a test stage; fully automatic trains have been in operation for years. It will take decades to automate entire car fleets and in less-developed parts of the world it may not happen at all. Automated rail services, on the other hand, are comparatively easy to deploy and scale-up.

Another major aspect of the current technological transformation of transport is decarbonisation, along with the reduction of air pollution. The Paris Climate Agreement and ‘Dieselgate’ have set the scene for potentially drastic regulatory interventions if the transport sector doesn’t clean up its act – currently it is only the large sectors of the world economy that still emit more CO2 every year, rather than less. Awareness is also growing for the shocking number of premature deaths caused by air pollution. Here rail can become a real leader, building on 140 years of experience with electric mobility and its own electric grid of some 240,000km – existing infrastructure only waiting to be leveraged for low-carbon mobility.

YOUNG TAE KIM is the Secretary-General of the International Transport Forum (ITF). Prior to his election as Secretary- General of the ITF in May 2017, Young Tae Kim served as Director-General in Korea’s Ministry of Land, Infrastructure and Transport. He holds Master’s Degrees from Seoul National University and Paris University de Vincennes-Saint-Denis as well as a Doctorate from Sciences-Po in Paris.

THE INTERNATIONAL TRANSPORT FORUM (ITF) The ITF at the OECD (the Organisation for Economic Co-operation and Development) is an intergovernmental organisation with 59 member countries. It acts as a think-tank for transport policy and organises the Annual Summit of transport ministers. ITF is the only global body that covers all transport modes and is administratively integrated with the OECD, yet politically autonomous. The ITF works for transport policies that improve peoples’ lives and its mission is to foster a deeper understanding of the role of transport in economic growth, environmental sustainability and social inclusion and to raise the public profile of transport policy. 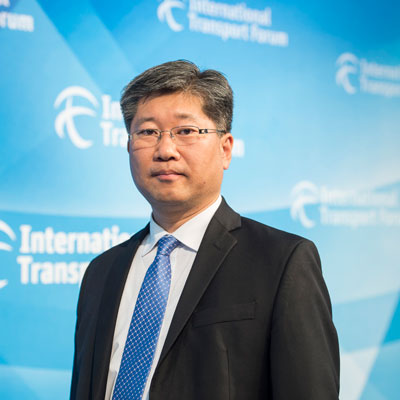