The Shift2Rail initiative, created between the European Union and several European rail sector players, is working towards the creation of ‘SERA’ – a Single European Railway Area. It contributes by researching the reduction by one half of the life-cycle cost of railway transport, the doubling of railway capacity, plus the doubling of reliability and punctuality. PINTA, a sub-project of Shift2Rail focused on traction systems, is divided into 10 Work Packages (WP). WP3 is focused on the reduction of acoustic noise through simulation and predictions, aiming to achieve a considerable cost reduction for rolling stock projects. In this article, PINTA colleagues share the advances of this ambitious work, which will improve the acoustic noise prediction of future train design. 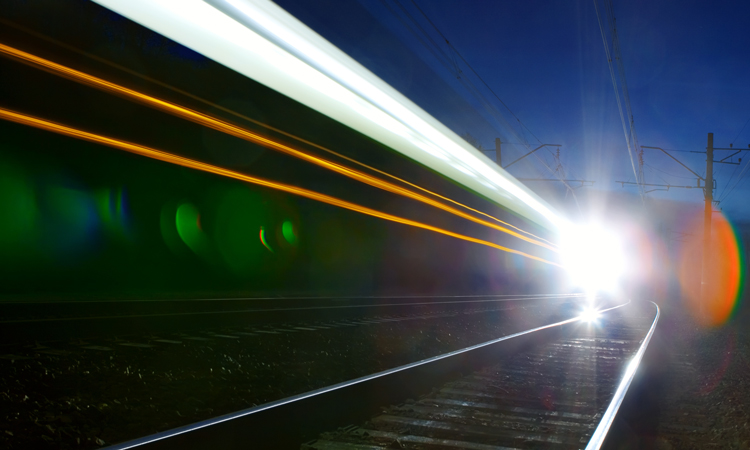 Railway noise is a real environmental issue in terms of health – mostly sleep disturbance – and annoyance for citizens. Various regulations exist, at European and national level, specifying maximum noise emissions from rolling stock vehicles. It is well known that at low-speed, train noise is dominated by emissions from train equipment. It is also well known that at very high-speed, aerodynamic noise dominates. In between, noise from wheel-track contact (also called ‘rolling noise’) is the main source. The actual balance between these three terms depends on the details of each train and of the tracks it runs on.

Simulation tools have made a lot of progress in the last few decades and today it is feasible to simulate noise of any rolling stock during basically any operating condition (at least at train level). The study of noise source ranking has shown that, at least for some rolling stock types, noise from the traction motors can be a significant source during the train’s pass by. But if things look under control at train level, the calculation and prediction of noise levels from the motor itself was far from achieved: The use of databases and simple empirical formulas was widespread. This is notably due to the technical and scientific challenges linked to the prediction of the physical phenomena at the origin of noise generation. Mainly thanks to the ever-growing computing power, these kinds of problems can now be tackled at an industrial level.

Cooling down motors is a noisy business

Rolling stock with distributed traction has some advantages with respect to locomotives, but from an acoustical point of view it means a larger number of motors and thus noise sources. The simplest and most reliable way to cool down a motor is to attach the fan rigidly onto the motor shaft. It is a widespread solution that has the disadvantage of being typically quite noisy at high speeds. Moreover, predicting this kind of noise is not trivial and until now, trial and error, plus a little bit of analytical relations, was the main solution for the acoustical design of self-ventilated traction motors. Such non-optimal designs are less and less acceptable, especially when complying with strict requirements from operators and legislation.

There is one main noise source to be studied: The motor’s cooling fan. Unfortunately, it cannot be studied alone as its close embodiment inside the motor substantially changes its noise emissions. It is therefore the whole motor, including fan, rotor, stator, cooling channels, inlets and outlets, that has to be studied as a single item. But, regardless of the environment, it is the air moved by the fan that is the noise source: As such, Computational Fluid Dynamics is the tool of choice to solve this problem. 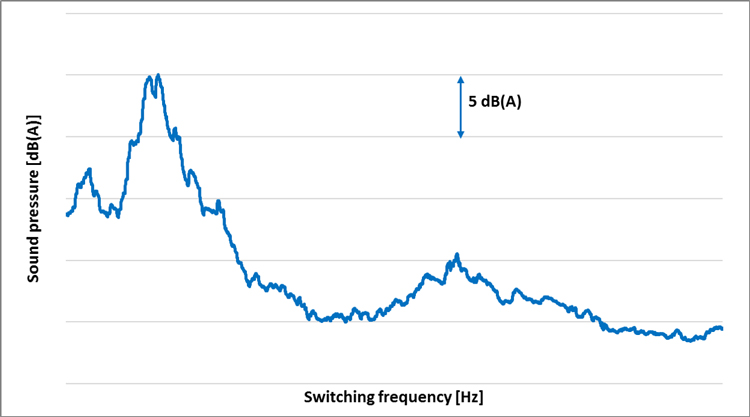 Electro-magnetic noise emissions from a traction motor during a sweep of the switching frequency up to 8kHz. Differences up to 20 decibels can be observed.

Two main techniques have been studied in PINTA. The first one is the use of CFD to solve the aeraulic behaviour of the motor and its fan. Measurements on a mock-up and analytical analysis can give insight on the equipment’s acoustic behaviour. Then, CFD can be used to develop optimised fan solutions because, generally, a better aeraulic behaviour will deliver better cooling at a reduced noise. This approach is computationally (relatively) inexpensive and can support fast optimisation loops.

The second is the computation of the acoustic field directly within the CFD code. The calculations are heavier but can reveal at the same time the thermal and acoustical performances of the motor. This technique has shown to give very good results when compared to two different measured cases. At a higher cost with respect to the first technique, the absolute noise emissions of a traction motor can be obtained without the need of a mock-up or reference measurements.

These two approaches are complementary: Either can be used, depending on the situation, to reach the best possible design and compromise. It is now up to the rolling stock industry to use them in optimising current products and look for new, better, innovative solutions.

What happens during acceleration?

During the acceleration of a train, for all kinds of traction motor topologies, the noise from the electro-magnetic origin is dominating. As increasing numbers of people start to live in close proximity to railway lines, there is lately a large focus on limiting train acceleration noise. Usually noise peaks appear between zero and 30km/h, but in some cases even at 80km/h such electro-magnetic noise may be audible and disturbing.

To address this issue of limiting the acceleration noise in traction motors, one of the objectives of WP3 in PINTA was the development of reliable noise prediction techniques for noise of electro-magnetic origin.

Calculating electro-magnetic noise in traction motors is a truly multi-disciplinary problem. Electromagnetic forces, mechanical structures and fluid behaviour – all must be understood and accurately modelled. The focus is on developing Finite Element (FE) models both for the electro-magnetic and structural parts of the problem. The reason to focus on FE models is that it allows for more flexibility in the geometries and detailed designs. Calculating the electro-magnetic forces in a motor is a well-known process. However, applying the forces on a detailed mechanical model and obtaining accurate results against measurements is more challenging. Relevant measurement cases showing distinct problematic frequencies in the mechanical model have been selected to compare with calculations. 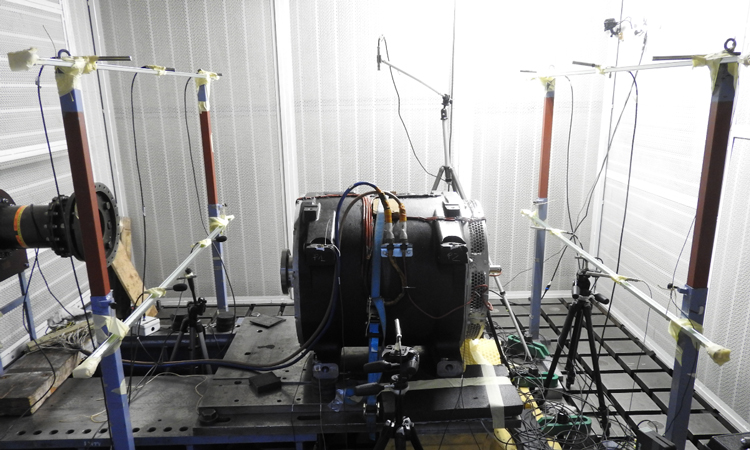 The techniques developed within PINTA will then be used to optimise the mechanical and electro-magnetic design of future motors to achieve lower noise emissions. For example, parameters that will be affected will be the thickness and shape of housing and end-shields, the slotting and the airgap length. Simulations can then be used as an input for the optimisation on the propulsion level in other PINTA work packages; finding the optimal trade-off between converter losses, traction motor losses and acoustic noise. Indeed, the development of converters with Silicon Carbide (SiC) semi-conductors offers new opportunities to decrease the acoustic noise during acceleration in the traction motors. With their low losses, SiC components allows higher switching frequencies than the usual silicon semi-conductors. The benefit is double for the acoustics: The higher frequencies from the supply are less likely to excite a mechanical mode, while the ripple in the current and electro-magnetic forces is much smaller. Nevertheless, even with SiC components, the switching frequency has limitations and it is important to be able to quantify its impact on the acoustic noise of traction motors. Switching frequencies in the ultrasound range are getting closer and closer.

Towards 100 per cent digital design

One of the objectives of PINTA was the development of reliable noise prediction techniques for traction systems: More than optimising a single solution, it is interesting to develop techniques applicable to any situation.

Operators have high-level requirements such that almost every solution must be tailored to the project’s needs, with a continuous work of adaptation and optimisation. The development of fully digital prediction techniques is the solution that is needed by manufacturers to answer such demands while remaining competitive on both delivery and economic aspects. When simulations reach a mature enough stage of reliability, expensive and time-consuming prototyping can be entirely skipped, and solutions easily adapted to each train’s needs.

Another, less apparent advantage is related to innovation drivers. Innovation is expensive, FIGURE 3 especially when radically new and exotic solutions are studied. Simulations are very democratic from this point of view: Their cost is independent of how bizarre solutions may appear. The development of reliable simulation techniques has thus the extra advantage of lowering costs for research and development, and accordingly acts as a driver for the innovation of new solutions.

Reliable predictions are a mandatory step towards the objective of having 100 per cent digital design of rolling stock: Rolling stock that will be cheaper and available faster, plus easier to maintain and customise. 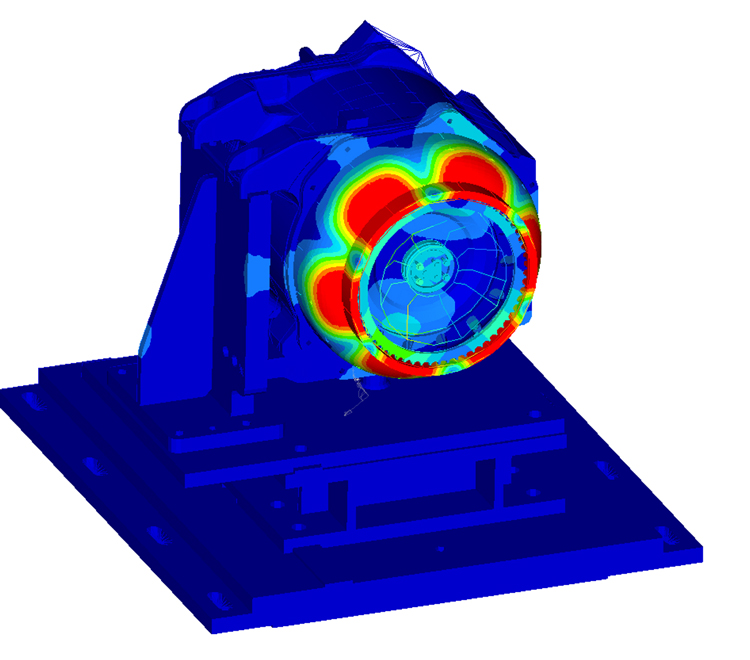 Simulation of mechanical modes of a traction motor as installed on a test bench. The ability to precisely identify modes and their frequency is key to be able to perform any optimisation of noise generation

Dr. Andrea Bistagnino works as a senior expert at Alstom in the Noise and Vibration group. He is also the Manager of the Acoustics and Aerodynamics group in Alstom Paris. Andrea is one of the PINTA Technical Leaders.

Since 2008, Florence Meier has worked as a Traction Motor Electrical Engineer at Bombardier Transportation and became a Senior Expert in 2018. She works with the electrical, thermal and acoustic design of traction motors as well as the optimisation of traction motors within propulsion systems. Florence has a PhD in the field of Electrical Machines from the Royal Institute of Technology in Stockholm, Sweden.

Iván Larzabal Goñi is an Electronic Engineer with a European Master in Project Management and is PMP certified. He is currently Traction System R&D Project Manager at CAF P&A and has more than 20 years’ experience in R&D integration system projects. Iván is PINTA TD and member of the PINTA Technical Management Team.