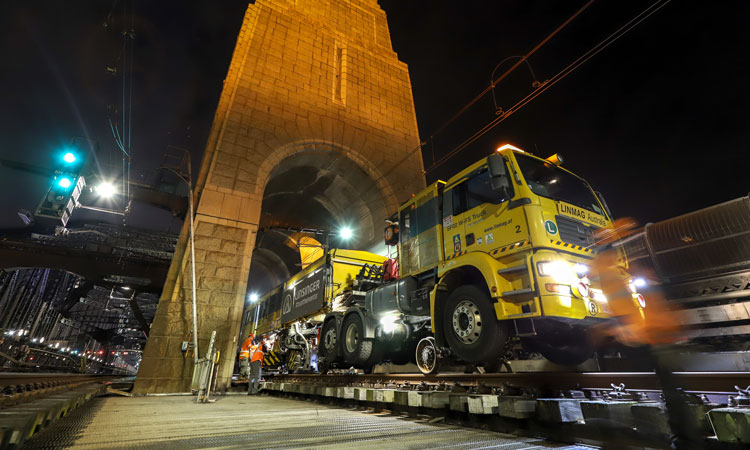 Australia’s railway network provides a variety of conditions and challenges. Metro lines and commuter trains in the urban centres of Sydney, Melbourne, and Brisbane enable millions of people to commute to and from work daily. Heavy-haul lines in sometimes very remote areas haul ore and coal from the mines to the harbours, and intercity and country services transport people as well as freight across the continent. Furthermore, this is all done on three different gauge systems – narrow gauge of 1,067m, standard gauge of 1,435mm, and broad gauge of 1,600mm.

Especially heavy rail systems, widely seen in Australia, can suffer from several challenges such as plastic deformation of the rail head (e.g. gauge face lipping) and rail wear. A defect that combines both failure modes is called corrugation. This defect manifests in the form of a wave structure on the rail surface, causing elevated noise levels inside and outside of the trains as well as damage to track components. Furthermore, rolling contact fatigue defects like head checks (also referred to as gauge corner cracking, periodic cracks at the gauge corner), spalling, shelling, or squats can drastically reduce the rail life leading to premature rail exchange if not treated correctly.

The company LINMAG Australia Pty Ltd has been providing rail maintenance services with Linsinger rail milling technology since 2013. Contrary to conventional rail grinding, rail milling is a rotational cutting process that creates milling chips as the only by-product. These chips are collected on-board the machine and can be recycled providing added value to the process. This is in clear contrast to conventional rail grinding, which pollutes the track infrastructure and its vicinity with grinding dust (abrasives from the grinding stones and metal particles from the rails) and poses a fire risk through the emitted grinding sparks. The gentle cutting process allows for adjustable, low-to-high metal removal per pass. Bluing of the rail surface or any unwanted material transformations on the rail are completely avoided, as the process heat transfers into the chips and the cutter heads – the rail surface stays in a low temperature range. The resultant shape of the rail (target profile) is defined by the high precision cutter head. Cutter heads can be changed within a few minutes allowing for almost any pre-defined rail profile to be applied by the milling process. A noise optimised surface finish is often required, especially in urban environments. Rail milling can effectively remove any singular or periodic rail surface deviations that will cause increased noise levels of trains. In addition, the process creates an acoustically optimised surface finish with its integrated rail polishing units (completely enclosed offset grinding wheels with by-product suction systems).

LINMAG Australia operates two flexible deployable Linsinger milling trucks of type ‘SF02W-FS Truck’. These Rail-Road-Vehicles (RRVs) are equipped with a milling and a polishing unit per rail and are suitable for travelling on normal roads and interstate roads at up to 100km/h. Once at the work site, the trucks can be quickly put on track at level crossings or similar track locations, transforming into a self-powered railway vehicle. In railway mode, the RRV can travel at up to 45km/h. A big advantage of the truck is multi-gauge capability, which allows it to operate on all Australian gauge systems.

LINMAG Australia started its operation in 2015 with the Australian Railtrack Cooperation (ARTC), who operate the Hunter Valley Coal Network. With tonnages varying from 45 MGT up to 190 MGT (dependent on the location in the network) and maximum axle loads up to 30 tonnes, this system can be classified as a heavy-haul railway. The ARTC network suffers from rail degradation by wear and RCF defects causing vehicle instability (hunting). Furthermore cracks, spalling, and especially squat defects on the running surface interfere with ultrasound testing capability, posing a safety risk. In such areas, a speed restriction needs to be applied until the defects are removed or the rail is exchanged. Despite having a cyclic-preventive grinding strategy in place, rail milling is used as a complementary technology to efficiently treat areas where conventional rail grinding is unable to provide mitigation. By applying a regenerative maintenance strategy, up to 5mm deep rail damage is efficiently removed, creating an as-new rail surface condition. Thereby speed limits can be lifted, rail life is extended, and premature rail exchange is prevented.

Not only mainline track is treated at ARTC with Linsinger rail milling technology. The LINMAG RRVs are also equipped with turnout treatment kits that add turnout processing capability. LINMAG is removing up to 3mm deep rail defects and is restoring the profile of turnouts with a maximum of three milling passes. In addition, initial treatment of newly installed turnouts (with low metal removal of 0.3mm) is also carried out. In this case, the rolling skin (also referred to as decarburised layer) and any profile irregularities are removed in a one-pass operation per switch direction.

Around Victoria’s capital city, Melbourne, V/Line operates a network of commuter and intercity railway connections. Parts of this network are also used by freight services such as grain trains. One area LINMAG is focusing on at V/Line is the complete removal of corrugation. As aforementioned, these defects can cause track component degradation and will result in noise issues. Due to the metal removal capability and the resultant surface finish, rail milling is efficiently used to 100 per cent remove corrugation defects in the network of V/Line. Furthermore, LINMAG is also treating level crossings that suffer from signal failures (rail corrugation) and profile degradation. The LINMAG RRVs are capable of treating level crossings under street traffic conditions while causing the same minimal traffic disruption comparable to a typical passing passenger train.

LINMAG is currently also operating in the network of Sydney Trains. Due to the train frequencies and axle loads, this commuter rail network, which operates across metropolitan Sydney, can be classified as a heavy rail system. Approximately one million passengers use the network daily, and about one quarter travels across one of the most iconic track segments – the Sydney Harbour Bridge (SHB). The bridge that was constructed in 1932 is listed in the New South Wales State Heritage Register. Until now, whenever the rails needed maintenance, no rail re-profiling was carried out and the rails were simply exchanged. Conventional rail grinding was condemned as being too risky for the bridge due to fire risk (wooden sleepers, other flammable parts), potential damage to bridge structure and vehicles, and because of environmental contamination of the waterway below. For the first time in history, it was possible to efficiently process the rails on the SHB due to the advantages of the environmentally friendly rail milling process. SHB is only one of many examples where LINMAG is applying rail milling on the Sydney Trains network. In general, on bridges and in tunnels, rail milling is used to safely and efficiently regenerate the rails and prevent premature rail exchange.

REINHARD SCHWARZENBERGER has transitioned from being a medal-winning Olympian for Austria to a successful manager in a variety of industries – firstly in Austria and now in Australia – over the last 10 years. He is the Chief Operating Officer at LINMAG Australia Pty Ltd and is responsible for the Australian business unit.

RICHARD STOCK has a masters and PhD degree in Material Sciences from the University of Leoben (Austria). He worked for 11 years at voestalpine Schienen GmbH in Austria in the R&D department and Technical Customer Service. In 2013, he moved to Vancouver (Canada) to work for L.B. Foster Rail Technologies in the area of Friction Management. Since 2017, Richard has been Milling Technology Manager for the companies LINMAG and LINSINGER, still based out of Vancouver.