Colleagues from the Islamic Republic of Iran Railways (RAI), Milad Alizadeh Galdiani, Navid Sabet and Mohamad Ali Mohit, explore how the lifespan of rail fastening systems in sandy environments can be increased by nano-coating the components, making them more resistant to the harsh operating environment. 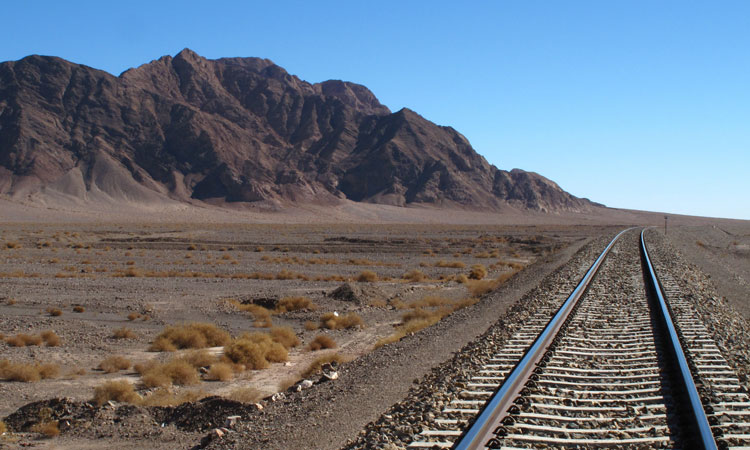 The railway is one of the most important modes of transportation, able to pass through varying topography with ease. In many countries – such as China, United States, Australia and Iran – rail networks pass through desert areas. One of the main problems in these areas is the movement of sand causing various damage to ballasted railway track, such as corrosion to railway fastening systems. The soil composition of some desert areas, such as Fahraj in Iran, consists of sand and salt. Due to the movement of sand and the corrosive ions of salt, railway fastening systems can corrode which, in turn, reduces the thickness of the components and their lifespan.

During research, nano-coating for fastening systems of ballasted track was introduced as a solution to prevent corrosion in rail clips and screw spikes, which is due to effects of sand dunes, and performance of that is evaluated in laboratory and field tests on the railway track. Corrosion as an electrochemical reaction which causes the metal to be converted to metal ion. In sandy regions, the accumulation of sand on the track causes the rail foot, the sleeper and the fastening systems to corrode. Nano-coating for fastening systems in ballasted track (rail clips and screw spikes) is composed of upgraded zinc-rich and epoxy, an additive which is produced by nano-technology and polyurethane. Its chemical formula is TiO2 PPY/Sn-doped + Zinc-Rich. Based on the amount and composition of the ingredients and the final cost of the product, nano-coating is classified in three categories (10–12). This classification of coatings, based on the amount of ingredients (grams) for covering a fastening system of railway track, is shown in Table 1. The three aforementioned nano‑coatings are economically affordable – the cost of implementing them is less than five per cent of the cost to manufacture a set of ballasted track fastening systems, and the first and third class has the highest and lowest prices, respectively. During the research, all three products were used in the field tests but, for the laboratory test, the third class was used, which has the lowest price in comparison with the other products.

There are a large number of various laboratory methods – such as: Linear Polarization Resistance (LPR); Electrochemical Impedance Spectroscopy (EIS) in the two modes of potentiostatic and galvanostatic; and salt spray – to measure the corrosion resistance of coatings. Due to the salty nature of sand dunes in desert areas, which increases the corrosive function, EIS and salt spray in the laboratory phase were used to evaluate the performance of the nano-coating. EIS is an electrochemical method in which an electric potential difference is applied and its relevant electrical current is measured. The corrosion rate and other electrochemical factors can be measured by using the relationship between applied electric potential and relevant electrical current. 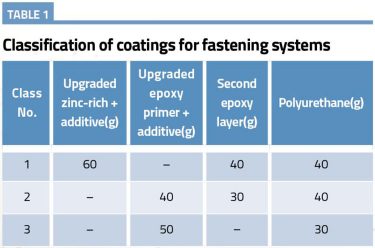 According to the graphs shown in Figure 1, the Nyquist curves of the samples indicate that real impedance (Z’) is increased by 315 times with nano-coating, in comparison with conventional coating, proving that the corrosion resistance of the fastening system with nano-coating is stronger than the fastening system with conventional coating.

In this research, a salt spray test was carried out twice on a fastening system with nano‑coating and a fastening system without nano-coating. Based‑on the results, the surface of the sample without nano‑coating began to corrode after 24 hours of spraying and, after 168 hours, 100 per cent of the sample’s surface was corroded. The results of the test on the fastening system with nano‑coating indicated a noticeable increase in corrosion resistance – after 1,000 hours of spraying on a sample during the test, no corrosion was observed at the screw surface, which indicates that the nano-coating has a significant role in corrosion resistance. The images of the rail clips and screw spikes with and without nano-coating used in the salt spray test are shown in Figures 2 to 51.

In order to conduct field experiments, railway tracks passing through a sandy desert area were primarily considered. To evaluate nano-coating performance against corrosion, some fastening systems with conventional coating were replaced with fastening systems with nano-coating, which are shown in Figure 61. After the first survey to the site of operation, corrosion in screw spikes, rail clips and rail foot was obvious, as shown in Figure 71.

After three and 12 months of exerting nano‑coating, to verify the performance of nano‑coating against corrosion, two surveys were carried out which proved that fastening systems with nano‑coating have higher corrosion resistance against sand dunes. After the first survey – three months after the implementation of the pilot sample – the performance of the nano-coating was completely acceptable.

Mohamad Ali Mohit graduated from the University of Tehran in Environmental Engineering and completed his bachelor’s degree in Railway Engineering from the Iran University of Science and Technology (IUST). Since 2017, he has been a Railway Expert at the Islamic Republic of Iran Railways (RAI) in the Administration of Track and Structure. His main focus areas are railway maintenance and safety, railway track geometry measurement and analysis, railway track in sandy regions and railway track and station design.

Milad Alizadeh Galdiani holds a master’s degree in Railway Engineering (structure of track railway) from Iran University of Science and Technology (IUST) and a bachelor’s degree in Civil Engineering from the University of Science and Culture (USC). Milad joined the railway industry in 2012 and has worked on several railway track maintenance and construction projects as railway expert, consulter and project manager in Construction and Development of Transportation Infrastructures Company (CDTIC) and Islamic Republic of Iran Railways (RAI). The main focus of his research and professional work has been on railway structure design, analysis and construction and railway track maintenance.

Navid Sabet is a graduate student of the Iran University of Science and Technology (IUST) in Railway Engineering. He is working for the Islamic Republic of Iran Railways (RAI) and the Administration of Kerman State Railway. Navid has worked as a railway expert in many railway projects, including field investigations and railway maintenance operations. He focuses on railways in sandy regions, railway reconstruction and rehabilitation and railway maintenance.