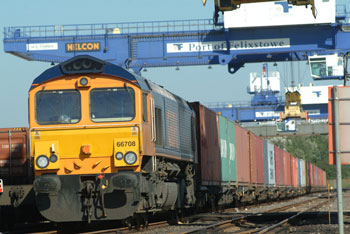 Three projects to improve vital freight and passenger links on the railway network are to receive €14m (£11m) from the European Commission. The successful bid to the TEN-T Agency brought funding to the following projects:

Network Rail’s director of freight, Tim Robinson, said: “Freight haulage is the lifeblood of our economy and this investment will give a boost to our efforts to encourage more of it onto the railway. As well as being the most environmentally-friendly way of transporting cargo, by moving more freight onto our rail network we can free capacity on other transport modes and keep the UK moving. “

The TEN-T Agency works to improve transport links across Europe, to increase economic and social growth.

The Department for Transport apply to the agency each year for funding to improve the rail network, supported by Network Rail.

The North West electrification project will see 25kv overhead power delivered to the routes between Liverpool and Manchester, Huyton to Wigan, Preston to Blackpool and Manchester to Preston via Bolton. The work complements the lines that are already electrified in the region – notably the key freight route of the West Coast Main Line, the busiest mixed use railway in Europe.

The route from Southampton to the West Coast main line is being improved to offer gauge clearance for large 9ft 6 containers, longer loops to allow longer trains, and new cranes. The TEN-T money has been invested to increase train lengths.

Felixstowe to Nuneaton is one of the UK’s busiest freight routes and the area around Ely is recognised as one of the major pinch-points. Installing the 775 metre freight loops will increase capacity, improve reliability and allow longer trains to be run. * It follows previous successful TEN-T bids worth €14m to improve other parts of the route.

One response to “Multi-million pound european funding for freight improvements”