SNCF is extending its high-speed network… 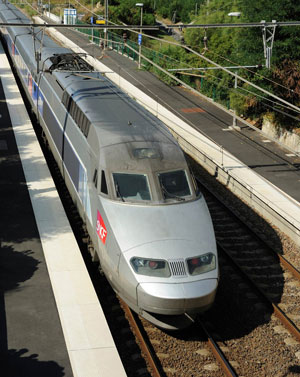 SNCF, the French railway company, is extending its high-speed network by constructing the LGV Est européenne line. The new section will enable trains to travel at speeds of up to 320 km/h. Getzner Werkstoffe developed a special sleeper pad for this major project. This new sleeper pad has meanwhile been granted a patent. Order value is 5 million euros.

The French high-speed LGV Est européenne line connects Paris with the east of the country. The new line is designed to allow trains to travel at speeds of up to 320 km/h. Getzner Werkstoffe, the vibration protection expert, will between now and 2014 be delivering a specially developed and recently patented sleeper pad for the stretch currently being constructed between Baudrecourt and Vendenheim, near Strasbourg. “This new type of sleeper pad is particularly suitable for high-speed lines. Above all, it also demonstrably lowers the maintenance costs of the track – as there is less wear, so the track requires less maintenance. The new line reduces travel times between Paris and Strasbourg by up to 30 minutes – trains now take less than two hours to cover the roughly 400 kilometres”, explains Jürgen Rainalter, Managing Director of Getzner. Scheduled services on the new line are expected to start by the end of 2015. The company anticipates further orders as a result of this major project.

“In the past we have enjoyed a successful relationship with Sateba, a leading French manufacturer of sleepers, so the market is well aware of our capabilities. Another significant factor in the decision to place the order with us is our ability to produce and deliver the enormous quantities required to the necessary standards within the stipulated time frame”, summarised Helmut Fuchs, Head of Sales at Getzner. The vibration isolation measures implemented provide passengers with an extremely comfortable ride, despite the high speeds reached. For the rail company, the fact that the track is less susceptible to wear means the life cycle costs of the line are lower.

The LGV Est project is part of the trans-european high-speed network that connects Paris with eastern France and south-west Germany, and then extends via Basle to Zurich. The line also connects to the high-speed link between Paris and Budapest/Bratislava (TEN). France’s high-speed trains (TGV) and the German ICEs have been using the 300 kilometre stretch of the LGV Est since 2007. The project is split into two construction phases. The second phase – the new 106 km section that is currently under construction between Baudrecourt and Vendenheim near Strasbourg – is due to be completed by 2014. Getzner is producing and supplying the high-tech materials required for this phase. In future, trains travelling towards Strasbourg will use the high-speed section of the line from Baudrecourt.

The ground-breaking ceremony for the second phase of the construction project took place in 2010. The European Union set up a dedicated working group to examine mass transit solutions. A research and development team from Getzner is part of this group, as is SNCF, Getzner sales partner Angst + Pfister and Sateba, the French sleeper manufacturer. The result: an elastic solution for the new LGV Est high-speed line to the exact specifications of SNCF – a special sleeper pad, which Getzner is now producing.

“To effectively protect the track superstructure we adapted the pad to meet the requirements of the project precisely and developed a new type of sleeper pad, which has meanwhile been awarded a patent”, explains Herbert Gehrig, Region South Project Manager at Getzner. This innovative, five millimetre thick pad features an optimised adhesion mesh that is embedded in the polyurethane during the manufacturing process. The sleeper pad is then pressed into the freshly poured concrete in the factory. The mesh forms an interface between the sleeper and the pad, creating a highly effective and permanent bond between the elastic components and the concrete sleeper. Getzner sleeper pads add a degree of elasticity to the track bed and help protect the ballast bed. The results of a WINS study (“Wirtschaftlicher Nutzen von Schwellensohlen” – Commercial benefits of sleeper pads) conducted by the Graz University of Technology also show that Getzner sleeper pads significantly reduce life cycle costs over the service life of a rail line.

Getzner has been working on the development of this special sleeper pad since 2006. Following numerous tests, the development of the new PRAG v3 sleeper pad was completed in 2010. “For us, this project opens a door into the French market, one that has enormous potential in the years ahead: SNCF will be replacing around a million sleepers a year as part of its maintenance programme”, adds Alexander Herovitsch, Vice President Region South.