Rail will play a decisive role in the strategy for tackling climate change, according to UNIFE and Transdev Group ahead of the United Nations COP21 climate change conference. At a Rail Forum Europe dinner held in Brussels on 14 September, UNIFE – the association of Europe’s leading large and SME rail supply companies – and […] 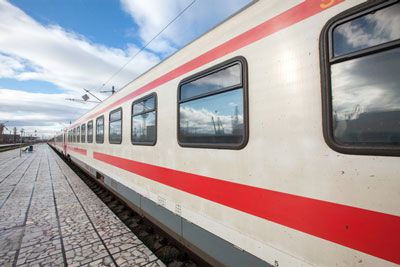 Rail will play a decisive role in the strategy for tackling climate change, according to UNIFE and Transdev Group ahead of the United Nations COP21 climate change conference. At a Rail Forum Europe dinner held in Brussels on 14 September, UNIFE – the association of Europe’s leading large and SME rail supply companies – and Transdev Group highlighted the importance of rail in the battle to tackle climate change. This announcement comes ahead of the United Nations COP21 climate change conference due to take place from 30 November to 11 December 2015 in Paris. Both parties emphasised rail being the back bone of sustainable transport and should therefore increase its share in relation to more polluting modes of transport.

Henri, Poupart-Lafarge, Member of the UNIFE Presiding Board and President of Alstom Transport, highlighted that climate targets will not be reached without significant efforts on transport and presented the rail industry approach to sustainable mobility, commenting: “We look forward to COP 21 later this year as rail can play a substantial role in combatting climate change, provided the legal framework sets the right incentives. The European Rail Industry is up to the challenge.  At Alstom we are committed to improving the energy efficiency of all our products by 20% by 2020, and are investing heavily in innovation to reach that target”.

Jean-Marc Janaillac, CEO of Transdev Group, pointed out that modal shift to rail would be key to make transport more sustainable and referred to the current EU legislation on this matter. He said: “Last week, the European Parliament adopted its report on the Transport White Paper. It stressed that the swift adoption of the 4thRailway Package should ensure competitive tendering for public service contracts and a high level of quality and efficiency of rail services. This high level of quality and efficiency is critical for railways to become more attractive and thereby contribute to COP21 climate objectives”.

Jos Delbeke, Director General of the European Commission’s DG CLIMA, agreed with the other speakers that the transport sector has to make a major effort to reduce its emissions and contribute to the EU climate target. “We should bring into focus a number of measures, such as modal shift and the user-pays principle, and increase electrification of public and private transport. Carbon-free electricity is the most efficient way to cut emissions” he declared. Looking ahead to the COP21 negotiations he concluded: “COP21 is a great opportunity: we are preparing not only for Paris, but also for the day after Paris, when climate deals will have to be implemented”.

Opening the debate, the CEO of Thalys, Agnès Ogier, presented an innovative study from Thalys which, beyond proving the environmental benefits of high-speed rail, also points out its positive impact on the society as a whole by comparing externalities like road congestion, road accidents, energy import bills of states and productive travel time. She also mentioned that Thalys will use the opportunity of COP21 in Paris to provide a sustainable transport solution for delegates to reach Paris.

Wim Van de Camp, Member of RFE and of the European Parliament’s TRAN Committee, asked the rail sector to come up with a credible estimation of external costs for all modes and pointed out that the promotion of rail should go beyond sustainability, commenting that: “Flexibility and reliability are essential to make rail more attractive.”

Ines Ayala-Sender, Member of RFE and of the European Parliament’s TRAN Committee, emphasised that more attention should be given to the problems of the energy sector in the ongoing discussions on decarbonisation, commenting: “We all support electrification, but from which source is energy coming?”

Libor Lochman, Executive Director of CER, stressed the uneven legislative framework for the different transport modes, stating: “Rail is already indirectly part of the Emission Trading Scheme, whereas we do not see a similar treatment for other modes, such as aviation and maritime.”

Philippe Citroën, Director General of UNIFE, outlined the rail industry’s strong commitment in view of the COP21 conference: “In order to promote that rail has a major role to play in the fight against climate change, UNIFE will be engaged in several initiatives during COP 21, such as the Paris Process for Mobility and Climate (PPMC) together with the Partnership on Sustainable Low Carbon Transport (SLOCAT) as well as the Transport Day on 6 December”.

RFE President and Chairman of the European Parliament’s TRAN Committee Michael Cramer thanked the participants and concluded the debates: “Climate change is a global issue and the transport sector has been the bad pupil until now. Tonight’s presentations and discussions showed that the rail sector con indeed provide concrete answers to revert this trend, provided that a fair legislative framework is put in place”.