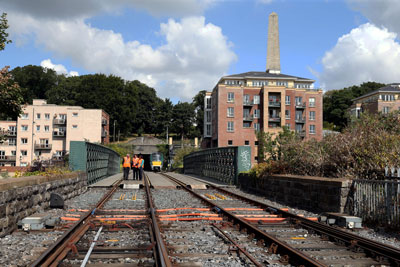 The new services, which began on the 21st November, give a new direct public transport connection between stations in south-west Dublin and north Kildare and the central business district between Connolly and Grand Canal Dock. This is the first phase of services to operate via the tunnel. The NTA plans to expand services in the future to include off-peak and weekend services.

Welcoming the new service, Minister for Transport, Tourism and Sport Shane Ross TD said “I’m delighted to announce the opening of this key piece of our public transport service. The Phoenix Part tunnel line is a vital part of our rail infrastructure and I know that it will prove to be of immense benefit to the travelling public, as will other transport projects such as the Luas Cross City line which will open in 2017. As Minister for Transport I am very proud to be one of the first commuters to travel this line and I heartily encourage others to do so.”

Anne Graham, Chief Executive of the National Transport Authority said “the NTA is delighted that services have now commenced through the Phoenix Park Tunnel, a project that the Authority promoted and funded. Together with city centre re-signalling, the new services ensure we will exploit the full potential of existing rail infrastructure at minimal cost and will offer more rail travel options for public transport customers.”