Cable theft on the increase as millions of passengers suffer 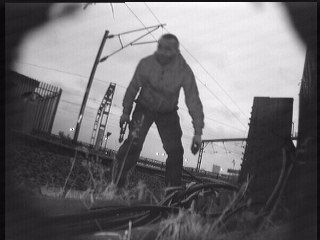 CCTV from King Edward bridge. CCTV and assiciated alarm led to individuals arrest. He was prosecuted

Cable thieves are ruining the lives of millions of passengers and costing the railway industry some £15 million a year as they target the railway for metal to sell as scrap. CCTV from King Edward bridge. CCTV and assiciated alarm led to individuals arrest. He was prosecuted

Criminals are targeting the cables which control vital rail infrastructure such as signals and points, causing delays to tens of thousands of trains and millions of people.

Figures released by Network Rail today reveal a £43m cost to this crime-spree over the past three years, resulting in over 16,000 hours of delay.

Dyan Crowther, director, operational services at Network Rail, said: “These criminal acts have to stop. Every day passengers and essential freight deliveries upon which our economy relies are being delayed by thieves looking to make a quick buck at our expense.

“I cannot over-emphasise just how serious these crimes are. Cable thieves deny passengers the service they rightly expect and, through the massive cost to the industry, deny everyone improvements to rail services.

“We are doing everything we can to protect the railway and will continue to work closely with British Transport Police and other rail partners to do everything in our power to deter thieves and bring those who attack our network to justice.”

Alan Pacey, Assistant Chief Constable of British Transport Police, said: “The railways have seen significant delays and cancellations as a result of thieves cutting and stealing signalling and power cables from the side of the track.

“But we are working to tackle the issue and in the past few months have seen significant jail sentences handed down to cable thieves put before the courts.

“We are determined to send a clear message that such attacks on our critical infrastructure are unacceptable and the police and rail industry are working together to tackle the problem.”

Methods used to deter and catch the thieves include:

Gary Cooper, head of operations at the Association of Train Operating Companies, added: “Train companies want to do all they possibly can to reduce the number of cancellations and delays caused by cable theft, which regularly leads to considerable disruption for many of their passengers.

“Operators and the industry as a whole are determined to crack down on the thieves, whose actions lead to extra work for staff and cost of millions of pounds, money which could otherwise be invested in improving services for passengers. The thieves are also putting themselves at risk of serious injury.

“Train companies are working closely with Network Rail and BTP to reduce and eventually eliminate this dangerous and disruptive crime, but tougher measures are needed to help tackle it.”

Anyone with any information about cable theft should contact British Transport Police or Crimestoppers where they can report the crime anonymously and could receive up to £1,000 reward if their information leads to a conviction.