Australia’s Deputy Prime Minister and Minister for Infrastructure, Transport and Regional Development, Michael McCormack, writes how Inland Rail is set to transform the movement of goods around Australia, generating opportunities for regions and the country’s economy, now and well into the future.

Australia is both a nation and an island. Although we have a large land mass, our population is heavily concentrated in our major state capital cities. Our major export industries, such as agriculture and mining, are based in Australia’s regions and rely on a connected supply chain.
More efficient freight connections across our major cities, significant ports and regional Australia has been a long-term goal for policy makers in our federal system of government. An inland rail freight line connecting north and south of the continent was first mooted over a century ago, and now, in late‑2020, construction is under way.

Inland Rail will connect the major eastern capitals of Melbourne and Brisbane, which are our fastest growing cities, via 1,700km of track through regional areas in the states of Victoria, New South Wales and Queensland.

As Deputy Prime Minister of Australia, I am very proud of my government’s commitment to build this truly transformational rail project. It is a flagship piece of rail infrastructure and delivers key actions of our National Freight Strategy.

Supporting longer trains, of up to 1,800m in length with double-stacked containers, Inland Rail will see goods delivered with 98 per cent reliability in under 24 hours, providing a cost-competitive alternative to long-haul road transport. The Inland Rail route will enhance and upgrade 1,100km of existing lines, as well as build 600km of new track.

As Deputy Prime Minister of Australia, I am very proud of my government’s commitment to build this truly transformational rail project.

Divided into 13 sections for construction, the first stretch of Inland Rail was finished in September 2020 between the regional towns of Parkes and Narromine in New South Wales, employing more than 1,800 people and investing almost $110 million in local businesses.

With Parkes as its starting point, Inland Rail now connects to the interstate rail lines which cross Australia from east to west and north to south. Further up the line, in the state of Queensland, Inland Rail will enter into a public private partnership to build the largest diameter diesel freight tunnel in the Southern Hemisphere through the Toowoomba Ranges.

Australia’s freight task is growing and changing. Freight volumes have more than doubled over the past 20 years and are set to increase by another 35 per cent in the next 20 years.

Inland Rail will serve as a backbone for Australia’s national transport network, connecting Australian producers and manufacturers to all mainland state capitals and major ports via existing rail lines and roads.

It is particularly important that we support regional communities, some of whom have survived drought, fires and floods in 2020, as well as boost economic activity as we bounce back from the COVID-19 pandemic.

Our government has worked tirelessly over the past six months to keep our nation and our regions connected. We’ve invested in telecommunications, health and also got behind small priority infrastructure investments that were identified by local and state governments.

Inland Rail will serve as a backbone for Australia’s national transport network, connecting Australian producers and manufacturers to all mainland state capitals and major ports via existing rail lines and roads.

We have committed to a record $110 billion transport infrastructure investment programme over the next decade. This includes funding for business cases to consider faster passenger rail for those strategic corridors which link our major capitals to key regional centres. We are working closely with state and territory governments and private consortia to investigate these projects through our 20-Year Faster Rail Plan.

In these endeavours, we are learning from the experience of international examples of faster rail and their surrounding regional centres.

Michael McCormack was elected as The Nationals’ Member for Riverina in 2010 and has held several roles, including Assistant Minister for Defence, Minister for Small Business, Minister for Veterans’ Affairs and Defence Personnel and, in February 2018, he was elected the 14th Leader of The Nationals and was sworn in as Australia’s 18th Deputy Prime Minister, as well as the Minister for Infrastructure, Transport and Regional Development. Prior to entering Parliament, Michael enjoyed success in journalism; at the age of 27, he was the youngest person appointed to edit a daily newspaper in Australia at the time. 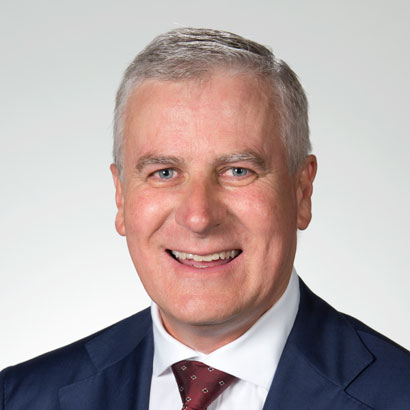