From the historical patent (Chapman, 1812) to the last development, the history of the bogie is one strongly linked with rail. Innovation has been constant: even if a bogie still consists of a frame on which two wheelsets are mounted, suspensions and other components, technologies have evolved significantly. Frédéric Desgaches, Bogie/ Running Gear Network Scientific and Technical Expert within the Rolling Stock Engineering Department at SNCF Voyayeurs, explains more. 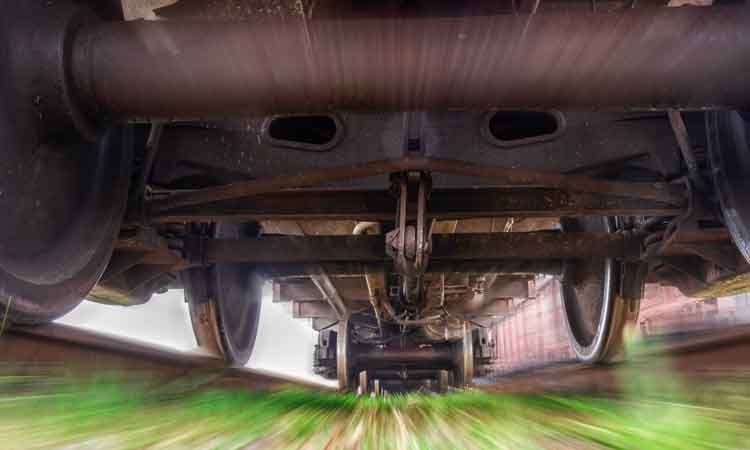 In this 21st century, the rolling stock bogie is becoming, little by little, a more mechatronic device than the purely mechanical component it has been up until now.

From the beginning to now

The very first bogie was described in the 30/12/1812 US patent n°3632 from William and Edward Chapman (‘Facilitating and reducing the expense of carriage on railways and other roads’). The idea was to solve the concern generated by narrow curve inscription of long vehicles and to distribute the weight of the railway vehicle to the track.

For many years common technologies were used, including a spoked wheel with tyre, leaf spring, and pad box etc. Nevertheless, very progressively, improvements lead to what one can call ‘modern bogies’: they are now equipped with monobloc wheels (usually forged), bearings, helical springs, dampers, welding frame, pneumatic suspensions, and when needed, other functions such as speed sensors and antennas.

The most common design is generally one that includes the following:

It is important to remember what a bogie is designed for. Strongly interfaced with the track, bogies have two fundamental ‘missions’ to fulfil.

The first is safety. It is the sub-system that manages the derailment risk. The wheel-rail interface is crucial for this, but suspension components and general design are very important too. That is for the ‘nominal state’, but in case of the worst-case scenario, specific efforts are put into the design and maintenance of crucial components such as wheels, axles, bearings, bogie frame. All these components support the mass of the carbody and the forces transmitted to the track. They have to fulfil that throughout their life, with no deformation, no cracks, and no tolerance on failure!

The second is good dynamic behaviour. The bogie deals with stability, comfort of passengers and has to limit forces injected to the track. Guided transportation seems to be simple, but with wheel and rail made from steel, switches to cross, and curves to negotiate, it is never as simple as it seems. Good design of a bogie and its suspensions is fundamental to guaranteeing a comfortable journey for passengers.

Hopefully, these major missions are fulfilled with success, meeting both security levels, and achieving ride comfort (railway transportation offers the best ‘dynamic ride comfort’ of all major transportation system: aircrafts, cars, ships etc). Nevertheless, as for every technology, all is a matter of compromise.

Some fundamental choices must be taken when designing a bogie, depending on the specification.

For example, if high speed is needed, there is a chance that anti-yaw dampers are required (in complement of other solutions). Nevertheless, the important couple needed to guarantee safe behaviour at high speed impedes good curve inscription in narrow curves. This is a compromise that faces the designer: high speed or low aggressive rolling stock in curves?

Another dilemma is between dynamic comfort and the width of the carbody; to better the dynamic comfort, flexible suspensions are better and a more lateral gap between carbody and bogie is needed. But, with gauge constraint, the carbody will be narrower, which is not desirable in terms of space offered to passengers.

In this second example, the compromise is between the level of dynamic comfort and space comfort.

If we look globally, a kind of paradox may be noticed:

1. Bogies are strongly controlled by standards (in the aim of managing interface with infrastructure and the requirement of high safety levels).

2. Solutions proposed are of high variety. One can say that for each new rolling stock design, a new bogie design is proposed.

It seems that few major innovations have occurred in recent decades, and small improvements have been proposed little by little. Nevertheless, a revolution is probable in the coming years.

The future of bogies

Due to the possibilities offered by modern technology (IT, mechatronic), the functions of a bogie will be improved in two main domains.

Condition based maintenance is an important evolution (even a ‘revolution’ perhaps?) in the way rolling stock are maintained. Huge cost savings are enabled, as maintenance operation can be planned with high efficiency and components replaced at the right moment.

Bogies may take advantage of this major evolution in the railway system, even if there are still some challenges to be overcame. These include:

1. Sensors are essential to evaluate component ‘healthiness’, but as bogies are ‘heavy mechanical parts’, there are generally not equipped with electronical devices. Moreover, sensors must support very high accelerations and information delivered by sensors has to be collected in the carbody (which add wire or specific equipment)

2. The right philosophy to detect component failures or abnormal behaviour may be difficult to define. An axle which tells that a crack appears on its body, or a damper signalling by itself that its performance is low, would be perfect.

At the first stage, four different sensor types may be used:

A combination of signals delivered by sensors, with the right algorithm, can deliver important and precious information. Possibilities are important and we are likely just at the beginning of major innovations which will be seen in the coming years.

Nevertheless, attention must be placed on economics, as costs may rise quickly: sensors, wires, signal processing, false alert management, risk assessment if fundamental security information is missed – the costs of which all must be balanced with potential gains.

While active devices have been explored for more than 60 years, nevertheless, important improvements are on the horizon.

Active systems on bogies are various, and can be placed in these main categories:

As early as the 1960s, active tilting systems for railway vehicles have been developed and tested, such as the tilting Mauzin-Chartet car in 1968. Although not very common, tilting trains are now in service on many routes around the world.

With a need of higher frequency control, there are few or no examples of commercial services for active transversal suspension and active steering solution. Till now, the technical challenge and associated costs were generally too high to justify commercial development.

It appears that these solutions may be economically pertinent now, with the help of electronical devices and IT technologies. For active steering, it’s an open door to ‘track friendly’ bogies, which can be of high interest to diminish rail costs.

Ideas and concept are too numerous to be presented in this short article, but there is no doubt that the next generations of bogie will be equipped with active devices (from active damper to active steering).

The ‘old’ concept of a bogie is still foremost in the railway system, as no better solution to guide trains efficiently currently exists with respect to security and low energy consumption.

This ‘heavy mechanical’ sub-system is always in evolution, at a slow rhythm. Nevertheless, the coming years would be marked with major improvement. Perhaps by 2030-2040 bogies will be more ‘clever’ than the traditional ones!

Frédéric Desgaches works in the Rolling Stock Engineering Department at SNCF Voyayeurs. He has more than 20 years of experience in this domain and has worked on various projects for new trains, standardisation and research.