The Liefkenshoek Rail Link – part of a strategy for capacity

Infrabel, the Belgian rail infrastructure manager, is now busy with the final work on the track for the Liefkenshoek Rail Link. The works for this direct rail link between the left and right banks in the Port of Antwerp are well on schedule, and the new railway infrastructure will be commissioned in the latter part of 2014. For Global Railway Review, Luc Lallemand, CEO of Infrabel, explains the most important milestones and challenges of this gigantic and strategic railway project for the Port of Antwerp. 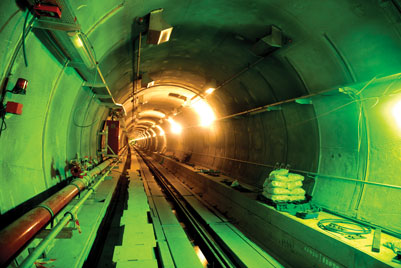 The Liefkenshoek Rail Link has the longest rail tunnels in Belgium

The Liefkenshoek Rail Link – part of a strategy for capacity

In line with its strategy, Infrabel is working on a step-by-step capacity expansion in the specific parts of the network where it is needed. This includes the Port of Antwerp. In an earlier stage, Infrabel expanded and modernised the rail infrastructure on the Antwerp left bank, including around the strategic Deurganckdok lock. This investment of €100 million delivered a good 150km of additional track and rail yards.

But to be able to best manage the growth in freight traffic, a new direct rail link is needed between the left bank (Waaslandhaven) and the right bank (Antwerpen-Noord goods yard): the Liefkenshoek Rail Link. This allows train traffic from the Deurganckdok to run more quickly and efficiently, because it can go straight through to Antwerpen-Noord (and vice versa).

Including the longest rail tunnels in Belgium

The route of the Liefkenshoek Rail Link (16.2km) begins on the left bank in the South yard. A track bed (6.7km) links this point of departure with the existing Beveren rail tunnel (1.2km), which has been completely modified and renovated. An open cutting provides the link to the departure shaft, from where the two tunnels (each approximately 6km) have been drilled at a depth of as much as 40m under the Scheldt and the Kanaaldok.

This drilling was realised by two tunnel boring machines (each 102m-long) and carried out – like all the other works for the Liefkenshoek Rail Link – under the supervision of TUC RAIL – Infrabel’s design office for railway technology. With the entry and exit tunnels added in, the Liefkenshoek Rail Link has the longest rail tunnels in Belgium: 6,745m and 6,752m respectively.

The reception shaft (= the end point of the tunnel drilling) on the right bank is linked by an access ramp to the modified rail tunnel (75m) under the R2 ring. A little further on is the connection with the Antwerpen-Noord marshalling station, the end point of the future rail link.

Construction work fully complete, work on the track in progress

On 12 November 2008, the building consortium THV LOCOBOUW (consisting of MBG, CEI-De Meyer, Vinci Construction Grands Projects and Wayss & Freytag) started working – on behalf of Infrabel – on the Liefkenshoek Rail Link. Since the summer of 2013, all the construction work on the biggest rail construction site in Belgium has been completed. At its peak, 700 people were working on this site every day.

Infrabel has now been working for 1.5 years on laying the tracks, the signalling system and the overhead lines. The track works from the South yard to the Beveren rail tunnel are almost complete. Work is still underway in the drilled tunnel shafts and on the Antwerp right bank. Starting in spring 2014, the new rail infrastructure will be extensively tested, in order to make it available to rail operators in fall 2014, following the required certification.

Safety is the top priority

Throughout the entire period of construction of this gigantic infrastructure project, but equally during its preparation and in later operation, safety is the absolute priority. In line with its strategy, (see the ETCS Master Plan) Infrabel is installing the European Train Control System (ETCS) on the track of the Liefkenshoek Rail Link from the start.

For the emergency services, there are 14 evacuation shafts and 13 tunnel connections in total as well as the necessary access routes and shafts. The rail tunnels are made out of concrete and are highly resistant to fire. They are, amongst other things, equipped with safety systems (including fire and access detection, cameras, etc.), a smoke and heat ventilation system, and a unique automatic foam extinguisher system. All of these safety features will be continuously controlled and monitored from the control room at the Antwerp Central Station.

As well as these works in the construction and safety areas, Infrabel is also integrating the Liefkenshoek railway link with the environment in a sustainable manner by creating a 54-hectare nature compensation area, installing various sound absorption buffers and constructing a number of sound barriers.

The construction of the Liefkenshoek Rail Link is, just like Diabolo (the northern rail connection for Brussels Airport which has been in service since 10 June 2012), being carried out as a Public-Private Partnership (PPP). This includes both the works with private investment within the PPP, as well as those with public investment outside the PPP.

Within the PPP, €690 million have been financed using the own funds of the investor (LOCORAIL SA/NV) and a financial contribution of €107 million from the Flemish Region. The remainder has been financed equally through the European Investment Bank on the one hand, and six commercial banks on the other. The project company LOCORAIL SA/NV (consisting of BAM PPP Investments Belgium, CFE SA/NV and VINCI Concessions SA) is financing the civil engineering work.

Outside of the PPP, Infrabel itself is investing in the track and signalling installations along the entire route. This work is currently underway, and this investment was originally estimated at €75 million, but has increased with inflation and is still dependent on modifications and improvement work on the ground. From 2013 onwards, Infrabel will pay a regular availability fee of around €50 million per year for 38 years. This also covers maintenance for the entire duration of the PPP.

Capacity expansion as support for growth of the Port of Antwerp

The Liefkenshoek Rail Link is part of Infrabel’s strategy for gradual capacity expansion of the rail infrastructure and an improvement of traffic flows between the left and right banks. This means that, from late-2014, trains will no longer need to make a detour via the bottlenecks of the Kennedy rail tunnel and the Antwerpen-Berchem–Antwerpen-Schijnpoort rail axis. This means that rail capacity there will be freed-up for passenger transport.

With this rail link and other future infrastructure projects (such as the later Second Rail Access, and the Iron Rhine), Infrabel is aiming to progressively support the Port of Antwerp’s growth. Infrabel wishes to further increase the share of rail traffic (container traffic) in the Port of Antwerp from the current 10% to 15% by 2030. This forms part of the strategy for optimum intermodality between the natural partners of rail and water transport.

Luc Lallemand has been CEO of Infrabel and Chairman of the Management Committee since October 2004. Luc has a Bachelor of seamanship and certificate of officer of long trade navigation and is also a Commercial Engineer. He has worked in various organisations including Financial Advisor with the Department Treasury of the SNCB (1991-1995), Budget Advisor and Principal Private Secretary with the Minister of Transport (1995-1999), Deputy Principal Private Secretary with the cabinet of the Vice Prime Minister (1999-2002) and Chief Financial Officer with SNCB (2002-2004). Luc also holds the position as Director with bPost, Vinçotte, RFF, RATP DEV (Paris) and is Chairman of the Board of Directors with TUC Rail as well as Vice President of EIM. 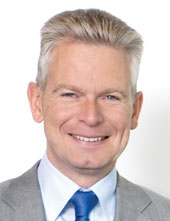