Leipzig’s new city tunnel – the backbone of a new network

On 15 December 2013, the Leipzig City Tunnel was opened for commercial service. Despite some delays in completing the new underground infrastructure which ended up costing double the initially planned €450 million capital investment, statements from industry-officials made during an opening ceremony were full of pride about the completion of one of Germany’s major infrastructure projects.

However, the new Leipzig City Tunnel is far more than a new underground infrastructure that links the two remaining Leipzig head stations – Leipzig Hauptbahnhof and Leipzig Bayerischer Bahnhof. It will become the backbone of a new railway network, consisting of six regional rail – way lines in Central Germany. In addition, the tunnel will also allow for long-distance railway services, provided they fit into the tight regional railway timetable schedule.

Every five minutes commuter trains will run through the tunnel in each direction with an estimated passenger volume of 60,000 per day (minimum). They will provide connections to all directions: from the neighbouring city of Halle in the West to Hoyerswerda, more than 100km to the East of Leipzig, and from the chemical industrial complex site of Bitterfeld north of Leipzig to the car manufacturing town of Zwickau in the South. Predictions show that passenger volumes will double after the new Central German railway network will have entered its final stage in 2017 with the completion of the high-speed rail link from Munich to Berlin. Thus, the Leipzig City Tunnel will serve as an additional axis for quick inter-regional transport on the railway corridor Berlin–Leipzig– Nuremberg–Munich.

In total, €960 million was spent on this infrastructure project, half of which was funded by the Free State of Saxony, and including some minor funds from the City of Leipzig. More than €200 million each was contributed by the European Funds for Regional Development and the German Federal Funds for Infrastructure Investments. Only €18 million was invested by German Railways, which owns the infrastructure and takes all financial benefits from its operation. According to projections from the Leipzig City Tunnel operator, the additional costs for facility management and maintenance of the four underground stations will range between €3.1 million and €3.8 million annually, thereby challenging the Greater Leipzig Railway Authority Association (Zweckverband für den Nahverkehrsraum Leipzig – ZVNL), which is responsible for planning, organising and financing regional and inter-regional railway services in this part of Central Germany.

According to German and State law, regional railway services are funded by regional or local railway authorities who obtain their money from Federal Funds for railway operation. At present there are 27 regional or local railway authorities in Germany which receive some €7 billion annually for funding railway services and, to a lesser extent, also for infrastructure investment in the regional railway network. In the Free State of Saxony, as provided for by State law, there are five regional rail authority associations organised on a municipal or district level. In contrast to regional rail, which according to Federal law is defined as railway services within a distance range of a maximum of 50km and which is operated on a non- commercial basis and, hence, heavily depends on public subsidies, long-distance rail is regarded as commercial. That is why formal tendering procedures for rail service operations will only be found in the regional rail sector. As a consequence there is hardly any competition in the long-distance rail sector in Germany. In 2010, ZVNL negotiated with German Rail’s regional railway service branch, DB Regio, a 12-year service contract worth more than €1.5 billion. The contract includes a rail network consisting of six lines, two of which operate on a 60 minutes interval-timetable. Out of the remaining four lines two run every 30 minutes, one on a 20 minutes interval-timetable and one every 15 minutes. As a result, trains within the Leipzig City Tunnel will run every five minutes in each direction, thereby offering better access from the region to the city centre and vice versa.

Since decentralisation of German regional rail services in 2006 by the Federal Government, infrastructure costs have steadily risen. For each Euro that is spent for operating regional railway services, more than half of it has to be paid for the infrastructure nowadays. European and German law provides for public tendering when it comes to awarding regional rail service contracts in order to minimise the negative effects of state-aid for competition and pricing policies. That is why DB Regio has to compete with non-state rail operators and, thus, only accounts for a three-quarter market share. This sharply contrasts with the infrastructure, which is operated exclusively by German Rail’s infrastructure branches DB Station und Service AG (for the stations) and DB Netz (for the tracks). It is for this reason that one might come to the conclusion that there exists an inversely proportional relationship between market share and infrastructure pricing with regard to the role of German Rail.

In the case of the Leipzig City Tunnel, ZVNL took responsibility for planning the Central German commuter railway network, and thus takes the lead when it comes to financing network operation. It is therefore essential for ZVNL to be sufficiently funded itself in order to secure the well-functioning of the whole system. It is only then that the very idea of the Leipzig City Tunnel and the Central German regional railway network will meet its own requirements: to provide an integrated public transport strategy for Central Germany. The need for such an integrated public transport strategy can be strongly felt in every corner of Central Germany, which is split into three Federal States (Saxony-Anhalt, Thuringia and Saxony) with different levels of governance and funding. However, only the bigger agglomerations fit into the definition of Central German Metropolitan Region (CGMR) as provided for by the Federal Office for Building and Regional Planning. The CGMR covers the city areas of Leipzig, Chemnitz and Zwickau in Saxony, Halle and Dessau-Roßlau in Saxony-Anhalt as well as Jena, Gera and Weimar in Thuringia with altogether more than two million inhabitants and roughly 2,000km2 of surface. The city of Leipzig is located right in the centre of the CGMR and hence long serves as a trade and commercial hub for the whole metropolitan region. It is therefore essential to have better access to and within this area. With its inter-continental airport, three motorways surrounding the city-borders and several high-speed railway links to all major cities in Germany, Leipzig can be easily accessed from many important economic and cultural spots in Germany and Europe. Since the Central German regional railway network started operation on 15 December 2013, this also applies to the CGMR itself. Therefore, Leipzig will improve its position as a transfer point of all levels of transportation (transnational / national / regional / local) after the opening of the City-Tunnel, which itself serves as the infrastructural backbone of the Central German regional railway network.

The Central German regional railway network might become the nucleus for improved rail services within the CGMR which aims at offering a holistic concept of integrated infrastructure planning, tariffing, ticketing and governance. The CGMR takes part in the so-called RAILHUC network of the European Union. The Railway Hub Cities and TEN-T network (RAILHUC) is part of the EU CENTRAL EUROPE programme, which is co-financed by the European Regional Development Fund (ERDF). Austria, the Czech Republic, Germany, Hungary, Italy, Poland, Slovakia, Slovenia and Ukraine are members of CENTRAL EUROPE, thereby strengthening cooperation among their regions and cities in order to improve innovation, accessibility and the environment and, thus, enhancing the competitiveness and attractiveness of Central Europe. The cooperation on a transnational basis gives these regions and cities the unique opportunity to commonly improve both long and regional rail services in Central Europe. Thanks to the Leipzig City-Tunnel, the Central German regional railway network might therefore serve as a blueprint for better connectivity and accessibility of many European regions.

Oliver Mietzsch studied Political Science, Economy and Law in Marburg/Lahn, London and Berlin. He holds a Diploma in Political Science from the Free University of Berlin. From 1992 to 1994 Oliver worked as a Political Adviser to a German Member of the European Parliament who later became Member of the German National Parliament (Deutsche Bundestag). He had than been working with the German Cities Association (Deutscher Städtetag) in the European and Transport Policy Field for 16 years in total. Since 2011, Oliver has been Head of the Greater Leipzig Regional Railway Authority Association (Zweckverband für den Nahverkehrsraum Leipzig – ZVNL). 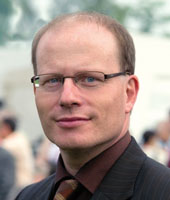