The Scandinavian 8 Million City Project: Opening the door to Europe and the world

In an increasingly globalised economy, the demand for efficiency and mobility is increasing. Bigger and stronger regions are needed to attract and retain people and companies who will create the wealth of the future. City regions have become the engines in developing the knowledge and information-based community. The development of The Scandinavian 8 Million City Project is rooted in the philosophy that collaboration forms a firm basis for development in a globalised world.

Floire Nathanael Daub, Project Manager for The Scandinavian 8 Million City Project explains that by exploring the potential of cooperation, jobs can be created and innovation milieus can be enhanced. Cooperation over long distances requires appropriate infrastructure for both passengers and freight. Whilst Europe and the world have been expanding their green infrastructure to stimulate growth – for example through massive investment in high-speed rail – such investment has been slow to progress in Scandinavia.

The countries of Scandinavian have built a good foundation for meeting basic transport needs through decades of infrastructure investments. However, a number of macro trends and challenges threaten the longterm economic growth of the Scandinavian region, including:

Regional competitiveness is in decline and has dropped from a ranking of 7.3 five years ago to an average of 10.6 today and thereby below the top 10 according to the World Economic Forum. The world map has rapidly changed over the last two decades and 75% of global economic growth is now being produced in emerging markets far from Scandinavia.

The Scandinavian capitals and the surrounding regions are the fastest growing in Europe, which is facing one of its most dramatic economic, cultural and social changes in history. This is putting enormous pressure on the existing infrastructure. To manage the growth, a more holistic and cross border planning approach is needed.

The Nordic countries have decided to become carbon neutral by 2050. One of the major challenges for achieving this are emissions from the transport sector which, in 2010, accounted for 36% of all CO2 emissions in the Nordic countries. In contrast to the rest of the world, 90% of all land-based freight transport is transported on roads. Freight volumes are expected to double by 2030.

The countries are insignificant individually and the demographic sizes of the Scandinavian countries are now comparable to cities like London, Mumbai, and Istanbul. In addition, the economies are characterised by export-driven small- and medium-sized enterprises.

Our neighbouring regions have invested massively in strategic and effective transport hubs to increase access and mobility of both people and goods – for example the airports of Hamburg-Berlin, Amsterdam, Brussels, London and Frankfurt each have bigger catchment areas than the total population in Scandinavia.

In 2021, the cross-border tunnel under the Fehmarn Belt will be ready and together with a modernised InterCity rail network in Denmark, new freight capacity will be added and high-speed trains will be able to reduce the travel time from Copenhagen to Hamburg down to 2 hours and 30 minutes. It is now up to the Swedish and Norwegian governments to develop their rail network in such a manner that they can take advantage of this new connectivity and connect to the rapidly expanding European high-speed network.

To sustain economic growth and the changeover to a low carbon society, the Scandinavian countries must integrate their economies and labour markets through more effective interfaces for people and goods transport both intra– and inter-regionally. If the perspective is changed from a narrow focus on nation-states to a broader inter-city and mega-regional focus that includes 12 million habitants between the capitals, the potential for large-scale transport investments such as a high-speed rail between the key Scandinavian cities and rest of Europe, becomes much more obvious and important to prioritise.

Comprised of three countries and four metropolitan cities, including two capitals, the idea behind The Scandinavian 8 Million City Project is to simply extend what has now been proved to be the most successful integration project between two countries in the Copenhagen-Malmø region into a truly Scandinavian scale.

The Vision for 2030 – not so far in the distant future – is a high-speed rail link that will physically connect the eight million inhabitants and contribute to making this mega-region one of the world’s most competitive. A high-speed rail link will allow travellers to leave Oslo Central Station and arrive in Copenhagen approximately 2 hours and 30 minutes later. From Oslo it will also be possible to reach Stockholm (via Gothenburg) in less than 3 hours and even Oslo to Hamburg will be an attractive destination by rail due to the fixed link between Denmark and Germany. And from Hamburg the rest of the European rail network will be accessible.

The partners include the majority of local and regional authorities as well as three government agencies along the corridor between Oslo, Gothenburg and Copenhagen, and this is an extended continuation of the partnership in a precedent project named COINCO (Corridor of Innovation and Cooperation). The City of Oslo and Business Region Göteborg are leading the project.

The Scandinavian 8 Million City Project is co-funded by the EU and was approved for funding through the Interreg IV-A Öresund-Kattegat-Skagerak programme in December 2011, and will run until autumn 2014.

The project is organised into the following three Work Packages (WP):

Focuses on short-term milestones regarding the existing InterCity network to increase the performance for both passengers and freight.

The focus has been on organisation and financing models to build separate tracks for high-speed rail.

Given that the overall objective of the project is to secure binding resolutions for the transport sector, WP 3 is dedicated to communications activities.

The project’s main goal is that Danish, Swedish and Norwegian governments reach a common and historical decision regarding investments in a modern Scandinavian rail network.

From a national to a Scandinavian planning perspective

Norway and Sweden have carried out extensive national feasibility studies to test the marked potential for high-speed rail. In 2009, the Swedish high-speed rail study was published2 which concentrated on the core routes to and from Stockholm and did not test whether a line should be built between Copenhagen to Oslo (via Gothenburg and Malmö).

In 2012, the Norwegian rail authorities published a study of five corridors in Norway. Two of these corridors extended into Sweden to reach Stockholm and Gothenburg. However, it is worth noting that only the northern section of the Oslo to Copenhagen route was evaluated and that virtually all of the investment was restricted to sections of the corridor within Norway. This meant that whilst the proposed route would capture a significant volume of local Norwegian traffic, the journey times were not competitive with other modes over longer distance journeys.

While the Swedish study showed a positive return on the investment for society, the conclusions in the Norwegian study were that passenger volumes were too small to justify the investment costs.

The aim for The Scandinavian 8 Million City Project was to test if a Scandinavian planning perspective could strengthen the businesses for high-speed rail in Scandinavia. In order to build on the existing studies and to make an accurate basis for comparison, the same models and consultants that had been involved in the previous national studies where used. The following parameters were different from the previous national studies:

The results show that a T-network (Oslo–Gothenburg–Copenhagen and Stockholm–Gothenburg) between the Scandinavian capitals are able to attract passenger volume’s that are comparable to other successful high-speed rail investments in Europe. In general, the long-distance mobility is higher in the Scandinavian countries compared to the European average and this adds up for a lower population density. On the Copenhagen to Oslo corridor, the service is estimated to attract 9.4 million passengers per year – the high-speed rail service between Paris and London counts 9.7 million passengers a year.

Benefits for society will far outweigh the investment required

Our calculations show that state-support is needed, since a pure-private-investment is not profitable without taking into account indirect economic effects that will be difficult to isolate – especially the positive growth effects on intermediate cities and freight transport to move from the roads to the existing rail network. This will increase accessibility, improve traffic safety, and drastically reduce the impact of transport on the environment and climate. Public Private Partnership (PPP) is well-suited for several sub-packages.

This is about connecting Scandinavia’s most important metropolitan areas and knowledge environments and making them into one collective and strong innovation and labour market area. Scandinavia will gain an efficient and sustainable transport system that opens-up the possibility to live in some of Europe’s most attractive areas, while simultaneously gaining access to one of the world’s most exciting labour markets. People could easily live in the Gothenburg region and commute to Norway or Denmark – or vice versa. Companies, organisations, universities and colleges will find it easier to find staff and researchers with the right expertise. All kinds of businesses will be able to establish themselves in attractive locations for reasonable prices. At the same time, the foundations are in place for flexible connections to an improved communications network within the region, as well as joining fast connections to other regions such as Stockholm and Hamburg.

Mega-region potentials can only be translated into benefits if we jointly take action. A cross-border high-speed rail connection including improved regional trains as well as freight trains is a very robust strategy in order to realise the mega-region potential in a sustainable way.

Floire Nathanael Daub is Project Manager for The Scandinavian 8 Million City Project. He is educated as an Architect/Urban Planner and specialises in the relation between transport-infrastructure and urban development. Before joining the public transportation sector, he co- founded Futureproof, dedicated to city master-planning, and on several occasions has been teaching at The Oslo School of Architecture and Design. His work career started at the architecture office Space Group. 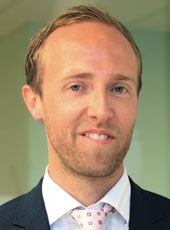