On 6-8 October 2015, Nordic Rail will once again invite the railway industry to Jönköping in Sweden for an opportunity for companies, organisations and industry peers to discuss what the future holds for rail in Scandinavia. In an exclusive interview for Global Railway Review, Jörgen Nyström, Business Sector Manager for Elmia Nordic Rail, explains what visitors can expect to gain from the next event.

Nordic Rail has been established since 1995; as the show organiser, what was your aim in creating  this event for the rail industry?

The purpose of Nordic Rail was to create a platform for companies, organisations and people in the industry to come together and talk about the current situation and prospects for the railways. Railway related issues are often complex and solving them calls for a concerted joint effort from everyone involved. The aim has always been to highlight the railway, strengthen its competitiveness and prompt a discussion about what the future holds. I think we have achieved this latter in particular, and that’s also why we’re the leading railway fair in the Nordic region.

For those who have never visited Nordic Rail, why should they attend and what can they expect to see and learn?

I think they should come to Nordic Rail for three main reasons. Firstly and most importantly, Nordic Rail is a trade fair for future business. This is because a large part of the fair is about finding not only new contacts, but also new business opportunities.

Secondly, the fair is a great chance to find out about all the latest products and innovations in the industry. We always strive to show the latest leading-edge technology for safer, more sustainable railway transport.

The third reason people should attend is all our interesting seminars, which have always been an important and much-appreciated part of the Elmia Nordic Rail. It’s tremendously exciting to follow the latest discussions about the future of the railway, and if you want to learn something new the seminars are definitely the place to be.

For supplier companies who want to target the Nordic market, who will they meet if they exhibit at Nordic Rail?

Well, the question is more, who will they not meet? Nordic Rail attracts virtually everyone involved in the development of the railway, from decision-makers and experts to vehicle manufacturers and suppliers. I’m very proud of this mixture, and I know that a varied attendance from different parts of the industry lays a strong foundation for doing business in the Nordic railway industry.

Having said that, I must stress that not only is it Nordic companies and organisations that come to Nordic Rail – we generally have exhibitors from around 40 countries, and 40% of the visitors are international. So yes, the fair does focus on the railway in the Nordic region, but it is very much an international fair.

With the major investments planned throughout the Nordic region, what opportunities are there for visiting companies?

Some €58 billion is being invested in infrastructure in Sweden alone in the next 10 years, and the figures are roughly the same in Norway and Denmark. This means there are tremendous opportunities for companies visiting Nordic Rail.

Above all I can see great opportunities in operation and maintenance of the Swedish railway, where the government is investing some €9.5 billion over 10 years – considerably more than has previously been spent.

At the same time there are several interesting new projects in the pipeline. Personally, I think it will be fascinating to see the intended main lines emerge on the Stockholm–Gothenburg and Stockholm–Malmö stretches. The government has already decided to build two sections for high-speed trains, and that decision obviously entails great future opportunities for Swedish and foreign companies alike.

The high-speed lines are just one of several major railway projects in Sweden, and our neighbour Denmark is planning to modernise part of its rail network for around €3.8 billion. That too is an exciting project which mainly aims to link Denmark together and to electrify several sections of railway.

Since 1995, Nordic Rail has established itself as a leading trade fair in Scandinavia. What new elements can we expect to see at the next event?

We are continuing to focus on and develop last year’s success of matchmaking for authorities, contractors and subcontractors. It was a highly successful concept and a great opportunity for everyone to find new business opportunities.

In conjunction with Nordic Rail, we are also organising Nordic Road for the first time. Nordic Road is a unique trade fair in the Nordic region focusing on roads, road signs and other systems and equipment. It’s a concept I firmly believe in, and a nice complement to Nordic Rail and our third trade fair, Future Transport, which is a joint fair for all modes of transport. 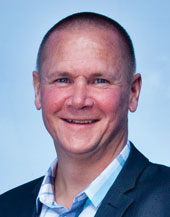