Investing in the railway system is worthwhile

The railway system has a tremendous future – if we want to have an economically and environmentally sustainable transport system available to support the ever-increasing mobility of people and goods, then we need to actively promote environmentally-friendly modes of transport, such as the railway system, explains Doris Bures, the Austrian Federal Minister of Transport, Innovation and Technology. In the Transport Masterplan, Austria is committed to a policy of making the transport system more socially beneficial, safer, environmentally friendlier and more efficient. This goal can only be achieved through a targeted expansion of the railway infrastructure.

Austria is already today among the best in the EU concerning the utilisation of its railway system. With 274 million passengers in the previous year, which means an average of more than 1,300 kilometres per capita, Austria ranks second in the EU, only just behind France.

Once the development of the major rail corridors has been completed, some 300 million passengers per year should be travelling by train, and 40% of all cargo transport will be carried by rail. In the future, around 9,000 trains per day will be operating in Austria – that’s 2,000 more than today. With a 30% share of cargo transport carried by rail, Austria is today already heading Europe in this respect. In a European comparison, it is a hallmark of the Austrian rail network that we also maintain a tight railway network for cargo transport.

It is clear that the expansion costs a lot of money. This year and over the next five years, a total of €13.2 billion will be invested in the expansion and upkeep of the Austrian national ÖBB rail network. However, these investments in the rail infrastructure are already paying off. The availability of a good railway infrastructure increases the productivity of the entire corporate sector with the labour factor benefitting to a more than average extent.

Investments made over recent years to speed up the western railway lines are already showing their positive effects and significant improvements are expected on the southern railway lines with the upcoming commissioning of the Koralm and the Semmering Base tunnels. That means a significant increase in capacity and higher speeds for both the passenger and cargo services.

All of this happens also due to the implementation of a nationwide integrated timetable. The coordination of all connections to the ‘hub’ connecting stations will not only provide consistent departure times easy to memorise and ideal interchange possibilities. Especially though, in interaction with the improvements in infrastructure and rolling stock, this simply provides faster and more comfortable train travel possibilities.

The integrated timetable is already being implemented step-by-step. Thanks to the targeted investment the already mentioned Western axis is booming. The example of the Western route makes it clear just how much an attractive and modern infrastructure attracts not only travellers, but also third-party providers of mobility services and sets an impetus for whole regions. Investments in the expansion and modernisation of the railway infrastructure is guiding transport into an environmentally-friendly direction and the extensive range of offers increases the number of passengers and goods using the railway and as such is reviving the surrounding areas.

On the European level, Austria ensures that these expansion plans are congruent with the concept for a European core network. The most important European corridors – three of them passing through Austria – will be upgraded in the coming years to high-speed lines. In a united Europe, a coordinated infrastructure policy and technical harmonisation of systems will help to optimally promote this environmentally-friendly mode of transport.

I am convinced that in the future the railway system will constitute the backbone of the transport system. It is by far the most environmentally-friendly and safest way to travel. Given the rising costs of fossil fuels and the growing problem of climate change, it is a dictate of sound economic and environmental sense to focus on climate-friendly mobility within a reasonable timeframe. All of us, the population, the economy and the environment, will benefit from a targeted expansion of the European railway infrastructure. 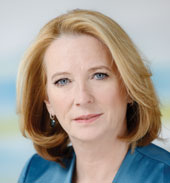 By Doris Bures, the Austrian Federal Minister of Transport, Innovation and Technology

2 responses to “Investing in the railway system is worthwhile”