Europakorridoren AB1 is a company owned by approximately 50 cities in Sweden. The organisation behind the company also has members in Lübeck and Hamburg in Germany. Four cities in southern Sweden – Jönköping, Värnamo, Ljungby and Helsingborg – began the project in 1993 and since then it has grown year-on-year. The project is to build a new high-speed railway from Stockholm to Gothenburg and between Copenhagen and Hamburg. Gunnar Sibbmark, Managing Director of Europakorridoren AB, provides more details about the significance of this project and explains why more and more cities have understood its importance and have joined as project-members. 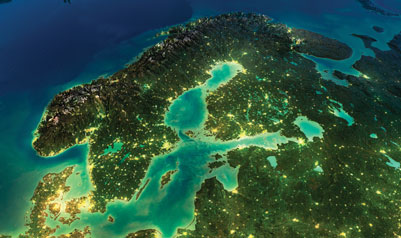 Europakorridoren AB works for decisions to be made by the governments in Sweden, Denmark and Germany for a new high-speed railway from Stockholm to Gothenburg – the so-called Götalandsbanan (the Gothia line) – and the so-called Europabanan (the European line) between Copenhagen and Hamburg. It is a part of the Nordic Triangle made up of Oslo, Stockholm and Copenhagen – one of the TEN-projects proposed by the EU.

Rail capacity in Sweden is extremely bad in some parts of the network, particularly in the south. All kinds of trains travel on the same lines and at different speeds. The result of this is extremely poor punctuality of services. Most of the freight trains must wait for passing passenger trains otherwise the passenger trains can’t maintain their speed and they will arrive at their next station too late. We need to separate most of the freight trains from the faster passenger trains, but the only way to do this is to build new double-track railways in those parts where most trains are operating.

If we are to build these new railways in Sweden, Europakorridoren AB wants them to be modern lines with the capacity to operate high-speed trains.

All over the world, new railway lines are being constructed to cater for train speeds of 300-350km/h. The high-speed rail network is growing rapidly which is resulting in shorter journey times and distances between cities and countries. We are getting closer to each other, and that is a good thing!

High-speed trains make it easier for people to live in one place, work in another and maybe even visit a theatre or a sporting event in a third place, even if the distances between them are substantial. This will result in closer links within regions and growing regions. The market for goods and services will expand, therefore increasing revenue too. More inhabitants will move to the region and the market will grow faster still.

It is not only between the cities along the high-speed line that will become closer together. From all places people can use the high-speed trains for some parts of their journey to travel fast, and then use standard trains for other parts of their journey more slowly. This will result in cities becoming closer to each other and people can travel quicker from one city to another. Therefore, the project is a win-win system for southern Sweden and, of course, for parts of Denmark and Germany too.

Together with the old railways and the roads, the new high-speed network will create an infrastructure to grow the region. In this part of Sweden, people can reach the nearest station on the high-speed network in less than 1 hour. Southern Sweden is also home to more than 75% of the Swedish population, around 80% of students in universities and high schools, and about 65% of Sweden’s GNP is produced here. The market for high-speed railway in this part of Sweden is similar to that in many parts of central Europe.

In the European Corridor region, cities can work much more closely to help each other solve different problems. The Europakorridoren region has the potential to become a winning region in northern Europe with good infrastructure where railways, roads, motorways, airplanes and the shipping industry all work together in a positive way.

If the right decisions are taken, the new railway could be built by 2030. With trains travelling at speeds of approximately 320km/h, journey times between Stockholm and Gothenburg will be about 2 hours; between Stockholm and Copenhagen less than 3 hours; and between Copenhagen and Hamburg less than 2 hours. We know from a lot of international experience that for journeys less than 3 hours, a lot of people will choose the train over the car or plane.

Sweden has rather long distances between the northern and the southern parts of the country. We have a lot of freight traffic running from north to south and further down to Europe. The majority of this freight is transported by road trucks due to the lack of rail capacity. If we could take most of the freight off the roads and transfer it onto trains, then we could considerably reduce pollution levels.

The project will generate a huge increase in rail traffic, therefore greatly reducing air, car and bus loads. It will also contribute to a better environment and boost safety on roads. The European Corridor project has huge environmental advantages, as well as being probably the biggest infrastructure project in Sweden. It is a win-win project not just for southern Sweden but for the environmental well-being of northern Europe has a whole.

The cost for the Swedish part of the project – the railway from Stockholm to Gothenburg and Jönköping to Helsingborg – is estimated at approximately 140 billion SEK (roughly €14.5 billion). This is a considerable amount of money, but the railway will operate for at least 60-100 years.

Along with providing improved capacity for freight traffic on the old mainline railway in Sweden, with much of the passenger traffic using the new line, the project will bring good social economic profitability. It is predicted that 60 years of traffic will generate roughly five times the investment costs. So we are extremely keen for the government to decide on the construction of this high-speed link as soon as possible and how to finance it. The longer we wait for the railway, the less money we earn from it!

In Sweden, Trafikverket, owned by the State, is the authority who is responsible for planning and building the railway. Trafikverket is now working on the first two parts of the Gothia line from Stockholm to Linköping (northern section) and from Gothenburg to Borås (western section). Trafikverket is also starting the planning process for the last section of the Gothia line from Borås to Linköping and also for the southern part of the European line from Jönköping to Malmö/Copenhagen. Trafikverket has decided that the speed limit will be 320km/h. Many people in Sweden are in favour of a new modern railway.

We believe this is a realistic projection for the project despite originally thinking it should be in function at the same time as the Fehmarn Belt tunnel by 2021 – a fixed link between Denmark and Germany over the Fehmarn Belt which will be built and owned by Denmark. The tunnel will have a capacity of a four-lane motorway and a double-track railway.

For 14 years, Gunnar Sibbmark was the second Mayor in his hometown of Värnamo, Sweden. During this time, Gunnar was involved with the first plans for the European Corridor (Europakorridoren) – this was back in 1993 so the project has been in planning for quite some time. When Gunnar finished work as a politician he became Managing Director of the company Europakorridoren AB.