Since 2003, the Turkish government has been paying great importance to investing in the country’s railway system and deeming the mode as being one of the most important aspects of growing sustainable development. Süleyman Karaman, Director General of Turkish State Railways (TCDD), explains that resources have been allocated to the railway sector for high-speed projects, the modernisation of the current system, the development of an advanced railway industry, and for restructuring… 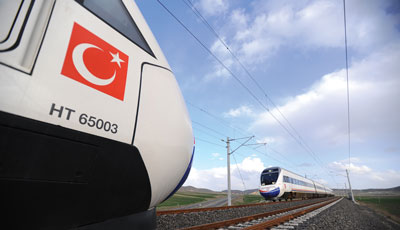 Improvement of passenger and freight transport within the overall transportation system enables both the construction of a healthier and more balanced system, plus strengthens the strategic importance of Turkey functioning as a bridge between Asia and Europe; thereby establishing a substantial and seamless railway corridor.

A new life with high-speed trains

Sixteen cities will be connected once all work is completed, bringing a new railway journey culture in Turkey and expanding the high-speed railway reach to approximately 37 million people. Journey times between cities will be decreased significantly – for example, the journey time will be reduced up to 2 hours between Ankara and Sivas, 5 hours between Istanbul and Sivas, 2 hours and 15 minutes between Bursa and Ankara and Bursa to Istanbul, and 3 hours and 30 minutes on the line between Ankara and İzmir.

If development of high-speed railway lines continues at pace into the future, perhaps one-day excursions between many cities on the west-east axis will be possible, bringing a more dynamic stance to economic, cultural and social life in Turkey.

The improvement of railway systems – with its low construction costs, long life timeframe, independence from the oil industry, and environmentally-friendliness, gives great importance not only for domestic but also international railway corridors.

As a direct result of establishing a railway system which is aligned with the European Union, Turkey will become active within international railway corridors, thereby strengthening Turkey, the Middle East, Central Asia and the Far East, and making Turkey a more dynamic country.

Considering that there is to be an overall worldwide investment in rail of 1 trillion dollars and 100 million dollars for the Middle East countries up to 2020, Turkey is set to rank among the top 10 countries in railway sector.

What have we achieved in the last 12 years in the railway sector?

The importance given to the railways has reflected itself in the investment planning to attain the specified targets and our Administration has made approximately 22.5 billion Turkish Liras investment within this period.

The following investments have been made in line with the targets on a planned and simultaneous basis:

The railways are getting ready to become the locomotive sector of our economy in the 100th year of the Republic with many big projects which are completed and ongoing in line with these targets.

The total length of new lines is 339km and includes the Tecer–Kangal Variant, the Menemen–Aliağa 2nd line, the Kütahya–Alayunt 2nd line, the Tekirdağ–Muratlı 1st and 2nd lines, the Cumaovası–Tepeköy 2nd line, the Marmaray tube tunnel crossing, the Ankara–Sincan North line which is the 1st phase of the Başkentray project, the Kemalpaşa–Turgutlu railway and junction lines as well as high-speed and fast train projects.

High-speed, fast and new conventional lines are being constructed as electrified and signalled lines and the studies for converting our existing lines to the same are ongoing.

Within the scope of improving the signalling projects which increase the capability and safety of our existing conventional lines, the signalling works on the line of 2,679km are ongoing.

Also, the electrification works on the conventional line of 2,484km along with the signalling projects are ongoing.

On the other hand, modernising the existing lines is prioritised in parallel with the projects of new railway construction and the transformation of existing lines into electrified and signalled lines. Since 2003, 8,700km of track renewals and maintenance work has been achieved. In order to strengthen the track renewal equipment, 144 new track-working vehicles have been added to our machinery and the total amount of track machines has increased from 224 to 368.

Twelve high-speed trainsets, compatible of speeds of 250km/h in order to provide passenger transport on our high-speed railway lines, are procured. In addition to this, one of seven very high-speed train sets, which can reach up to 300km/h, has been received and the manufacturing works of the others are ongoing. Also, work continues regarding the procurement of 106 high-speed trainsets.

Furthermore, 20 new generation mainline diesel locomotives are being manufactured in TULOMSAS and they are gradually being put into service.

The first local diesel trainset, the ANADOLU Project, which has been implemented in order to provide faster and more comfortable services to our customers in the short- and medium-term, decrease the operational cost and increase our share in passenger transport. Out of 52 sets, 24 have been procured and the rest are being manufactured in TÜVASAŞ.

In order to provide service in metro standards in urban transport, the Marmaray Project in Istanbul and the Egeray Project in İzmir have now been completed and put into operation. Works continues on the Baskentray Project in Ankara.

Regular commuter train services in metro standards on the 79km-long route between Cumaovası and Aliağa has been in operation since 6 March 2011 by İZBAN Inc. established in cooperation with TCDD and the Izmir Metropolitan Municipality.

The 2023 railway targets are to reach a length of 25,000km railway lines by constructing 13,000km of new lines – particularly 3,500km high-speed lines, 8,500km fast lines and 1,000km conventional lines. Furthermore, there is a target to complete the renewal of all lines (4,400km), to increase the level of railway transport share by 10% in passenger and 15% in freight, to complete the liberalisation of the rail sector, to establish national railway standards, to provide the efficient and sustainable implementation of a Safety Management System in all levels of infrastructure and operation and to turn it into a sectorial culture and to improve the national signalling system.

The Ayrılıkçeşme–Kazlıçeşme section of the Marmaray was put into service on 29 October 2013. Marmaray, which is constructed under the Bosporus and is the deepest immersed tube tunnel in the world, is considered as an engineering marvel by authorities. With this project, Asia and Europe is now connected by railway. The journey time between the two continents is 4 minutes and 56 million passengers have travelled since the inauguration.

With the realisation of all sections of the project, it is envisaged that one million passengers will travel by Marmaray per day. The share of the rail system in Istanbul’s urban transport system will increase from 12% to 28%.

The Marmaray project completed the missing link for freight and passenger transportation from London to Beijing. Asia and Europe came together with a railway network 60m-below sea level.

Great increases in the rail freight

Block Container Train Operation has been performed mutually from Turkey to the west through Germany, Hungary, Austria, Bulgaria, Romania, Slovakia, France and the Czech Republic, and to the east through Iran, Syria and Iraq, and to Central Asia through Kazakhstan and Pakistan. However, transportation to Iraq and Syria has not been carried out because of the domestic disturbance and incidences since October 2012.

With the Samsun–Kavkaz train ferry, 116,190 tonnes freight have been transported with mutual 100 services between Turkey and Russia through Black Sea since February 2013.

Our Administration makes a great effort to develop international cooperation. Within this scope, TCDD has been a member of the UIC Executive Board and has carried out the Presidency of the UIC RAME (Regional Assembly for Middle East) since 2007.

Over the last 12 years, a great number of agreements and documents have been signed with Germany, Italy, Spain, Japan, South Korea and China.

In addition to the modern railway lines and other important projects being carried out in our country, the National Train Project has been established to provide design and technology details to produce a new generation of railway vehicles.

Within the context of the project, the selection of the concept design theme of the New Generation National High-Speed Train and industrial engineering technical specifications have been completed and tender studies are ongoing.

The concept design of the New Generation National Electrical – Diesel Train Set has been specified and tender process has been completed by preparing related technical specifications. Provision studies continue regarding production lines.

The concept design of the New Generation National Freight Wagon and engineering technical specifications has been completed and tender studies are in progress.

Liberalisation of the railway sector

With the publishing and entering into force of Law No. 6461 on Liberalisation of the Turkish Railway Sector on 1 May 2013, there are now circumstances such as:

The restructuring process continues. It is planned that TCDD Transport JSC will come into operation in 2015 in compliance with the action plan approved by the Transportation, Maritime and Communication Ministry.

Süleyman Karaman graduated from the Mechanical Engineering Faculty of Istanbul Technical University (ITU) in 1978. In 1981 he took his Master’s Degree at the same university and received a Mechanical Engineer MSc title with high degree. Following this, Süleyman carried out some studies concerning farming machinery, took up a short-term military post and worked for an automotive company. Then in 1984 he was appointed as Deputy Director General of IETT (Istanbul Public Transport Authority) where he took part in many projects – one of which was the implementation of Smart Tickets. Süleyman became Director General and Chairman of the Board of Turkish State Railways (TCDD) in January 2003.