The Liefkenshoek Rail Link – a true passage to Europe

Infrabel, the rail infrastructure manager for the Belgian railway network, opened the new Liefkenshoek Rail Link to freight operators on Sunday 14 December 2014. In an interview with Global Railway Review, Luc Lallemand, CEO of Infrabel, looked back one more time at the milestones in this rail link project that is strategic for freight traffic, the Port of Antwerp and the Belgian economy… 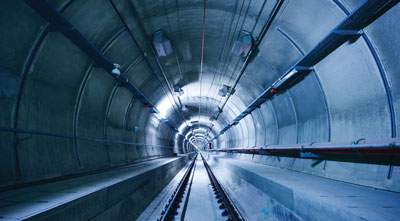 A strategic rail link in the heart of the port

The Liefkenshoek Rail Link will improve the flow of traffic between the Waaslandhaven on the left bank (including the rail installations at Deurganck Dock, the largest tidal dock in the world) and the Antwerp North marshalling yard (the second largest marshalling yard in Europe) on the right bank. Trains can now run directly, and thus more quickly and efficiently, between the two banks of the port.

Many freight trains now no longer need to make a detour via bottlenecks (Kennedy rail tunnel and the Antwerp-Berchem–Antwerp- Schijnpoort rail axis). This will also free-up capacity for passenger trains, thereby improving the flow of traffic on the Antwerp–Ghent rail line, for instance.

A central logistical gateway for Europe

The Liefkenshoek Rail Link fits in with Infrabel’s strategy of gradually expanding rail capacity in and around the Port of Antwerp in order to help support growth. Through a joint strategy with the Port Authority, the Flemish government and the Belgian government, Infrabel aims to increase the share of rail traffic (containers) from the present +/-8% to 15% by 2030.

Other infrastructure projects, including the second rail access line and the ‘Iron Rhine’, are also planned for the future under this inter-modal strategy for improving access to the Port of Antwerp. The European rail corridors provide new access lines and allow interoperable freight traffic across national borders. The Liefkenshoek Rail Link also represents a real logistical gateway and a major boost for all freight forwarders from Europe and even the rest of the world.

An excellent example of a Public-Private Partnership

The Liefkenshoek Rail Link has been realised by means of a Public-Private Partnership (PPP), using the well-known ‘DBFM’ formula (Design, Build, Finance, Maintain), without the demand risk being transferred to the private partner. The financial closing and awarding of the construction contract took place on 5 November 2008. The total investment in the Liefkenshoek Rail Link amounts to €873 million and includes both works funded by private investment in the PPP (via the project company LOCORAIL NV) and by public investment (Infrabel).

The PPP covers financing totalling €690 million, partly from the private partner LOCORAIL NV and partly from bank loans to LOCORAIL NV – half of which came from the European Investment Bank (EIB) and half from six commercial banks. The project company was set up by BAM PPP Investments Belgium, CFE NV and VINCI Concessions SA. It financed the civil engineering works and is also responsible for maintenance and subsequent upkeep. The Flemish government contributed €107 million in order to limit the financial burden within the PPP.

Outside of the PPP, Infrabel itself is investing €183 million in the track and signalling installations along the entire route as well as in a number of extra safety works. Infrabel is to pay a regular availability fee of around €51 million per year for 38 years from 2013. This fee covers the reimbursement of the investment as well as maintenance and upkeep by LOCORAIL NV for the entire duration of the PPP. The Liefkenshoek Rail Link is Infrabel’s second PPP project following the Diabolo (the northern rail connection for Brussels Airport, which has been in service since 10 June 2012).

On 12 November 2008, LOCORAIL NV, commissioned by Infrabel and with the support of the temporary building consortium, THV LOCOBOUW (consisting of MBG, CEI-De Meyer, VINCI Construction Grands Projets and Wayss & Freytag), started the engineering works, which lasted until the autumn of 2013. TUC RAIL, Infrabel’s consulting firm, was responsible for coordinating all these works.

The route of the Liefkenshoek Rail Link (16.2km) begins on the Left Bank in the South yard. A 6.7km-long track bed links this point of departure with the existing 1.2km-long Beveren rail tunnel under the Waaslandkanaal, which is being completely modified and renewed. An open cutting ensures a link with the departure shaft in Kallo. The 6km-long tunnel shafts were dug by two huge boring machines and descend to 40m under the Scheldt River and canal dock B1-B2.

The reception shaft (the end point for the tunnel drilling) on the right bank (RB) is linked by an access ramp to the modified rail tunnel (75m) under the R2 ring road. A little further on is the connection with the Antwerp North marshalling yard, the end point of the new rail link.

Infrabel began laying the rail infrastructure (tracks and catenaries) during the summer of 2012. The signalling works (including the installation of 50 signals and 244km of cables) required to guarantee the safety of rail traffic, were carried out along the entire route.

At the beginning of 2014, Infrabel started testing the new rail infrastructure of the Liefkenshoek Rail Link1. Since September 2014, training runs have also been organised for the various rail operators so that train drivers can familiarise themselves with the new rail link and all the safety systems.

In accordance with its phased safety strategy, Infrabel immediately installed the European Train Control System (ETCS) on the Liefkenshoek Rail Link, which is also equipped with the GSM-R (GSM for Railways) digital communications network. These systems underwent extensive testing in 2014, including Infrabel’s own ETCS test train.

The entire Belgian rail infrastructure will be equipped with ETCS by the end of 2022, thereby making Belgium one of the three safest rail networks in Europe. Approximately 14% (899km) of mainlines on the Belgian network (6,472km) currently have ETCS.

The rail tunnels are equipped with fire and access detection systems, cameras, a smoke and heat extraction system and a unique automatic foam extinguishing system. This system can fill a tunnel section with foam in three minutes, a first for European railways.

All of these safety features will be constantly controlled and monitored 24/7 by the control room at Antwerp Central. Walkways, access routes, evacuation shafts (14) and cross passages (13) have also been constructed for the emergency services and safety drills have been organised.

All of these tests were mandatory requirements for authorisation to be granted for the new rail infrastructure entering service. Authorisation was granted by the Belgian Rail Safety and Interoperability Service (DVIS), following certification by the independent body, Belgorail, based on the safety dossier provided by Infrabel.

The largest Belgian railway project has been fully completed after six years of work; a formidable technical feat that has been achieved thanks to the optimal cooperation between the project partners. The Liefkenshoek Rail Link is an example of a modern, safe and quality railway infrastructure and is ready to develop into a true ‘Passage to Europe’.

Luc Lallemand has been CEO of Infrabel and Chairman of the Management Committee since October 2004. Luc has a Bachelor of seamanship and certificate of officer of long trade navigation and is also a Commercial Engineer. He has worked in various organisations including Financial Advisor with the Department Treasury of the SNCB (1991-1995), Budget Advisor and Principal Private Secretary with the Minister of Transport (1995-1999), Deputy Principal Private Secretary with the cabinet of the Vice Prime Minister (1999-2002) and Chief Financial Officer with SNCB (2002-2004). Luc also holds the position as Director with bPost, Vinçotte, RFF, RATP DEV (Paris) and is Chairman of the Board of Directors with TUC Rail.