Following the Rail Ministers announcement on a community rail plan initiative, Paul Johnson, Chairman TransWilts, highlights plans and benefits of the scheme which will give transport groups and passengers a greater say on rail services in Wiltshire. 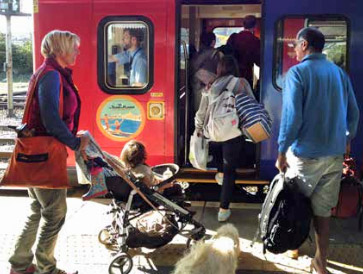 Following the Rail Minister’s announcement on a community rail plan initiative, Paul Johnson, Chairman of TransWilts, highlights plans and benefits of the scheme which will give transport groups and passengers a greater say on rail services in Wiltshire. The TransWilts service operates on a 32 mile route in the County of Wiltshire, between Swindon and Westbury, with a single-track ‘Melksham section’ between Chippenham and Trowbridge. The section between Swindon and Chippenham shares the high-speed line between London Paddington and Bristol Temple Meads, which is now being electrified as part of Network Rail CP6. In 2011 the business case included a forecast that passenger numbers would reach 218,000 in five years. In fact the growth has exceeded all expectations, with passenger volumes reaching 235,000 in just two years. Weekend traffic is also buoyant, a December 2015 ‘on-train’ survey showing 101% of Monday passenger volume on a Saturday and 82% on a Sunday. The passenger growth at Melksham Station has been dramatic, with a 117% increase last year, making it the 7th highest in the UK. This growth has given the confidence to plan beyond the three-year trial period. GWR plans to introduce a two-car service using cascaded stock, following Thames Valley electrification. Post Hendy CP5 includes the lengthening of the existing one-car platform at Melksham to three-cars, suitable for Class 165/166 rolling stock.

TransWilts’ immediate strategy is to put stations at the heart of local communities and a Service Designation application is currently out for consultation.

In the medium term during the GWR franchise period to 2019, TransWilts wants to increase the local community involvement in its stations. An increase in membership volunteers will support a target to improve both the Melksham and Chippenham stations. At Chippenham station TransWilts is proposing to re-open the third platform with a passing loop as a regional interchange with the new IEP electric service. The third platform will provide an exciting heritage opportunity by utilising Brunel’s original building and better line resilience with the interworking of the diesel and electric timetables.

The next stage in supporting the continuing passenger growth is an expansion of the current 8 trains per day to an hourly service. Some commuter trains are already significantly overcrowded, with 98 passengers being recorded in the one-car train. The single track section shares the passenger traffic with freight, so some local changes in the daily timetable may be needed to avoid conflicts. A new signal at Melksham station is included in the Local Enterprise Partnership planning and will make much more efficient use of the section.

The extended TransWilts service will provide a north-south link between most of the principal economic and residential centres in the County of Wiltshire, through to Southampton Airport and with connections to south coast ports.

The extended service would also bring the Halt station at Dilton Marsh into the regional service, resolving the problem of an existing irregular stopping pattern.

As part of the extended service aspirations, TransWilts is proposing a new station ‘Wilton Parkway’ to act as a park and ride for Salisbury and a sustainable gateway to Stonehenge. The station would use the existing infrastructure, with some adjustments in the platform logistics at Salisbury station. The TransWilts’ response to the SW franchise consultation included the case for the Wilton proposals. It remains to be seen whether the new franchise specification will reflect their ambitions.