How responsible can individual staff be made for the occurrence of an accident?

In his latest blog for Global Railway Review, Peter van der Mark looks at a number of recent rail incidents and questions how responsible can individual staff be made for the occurrence of an accident when Automatic Train Protection has been disabled by the operator? 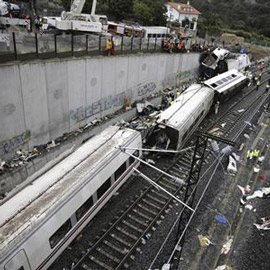 It is well known that rail accidents always have a chain of interlinked precursor issues; it never is only one person who is completely responsible. Following publication of the CIAF report on the Santiago de Compostela high-speed derailment in Spain – which blamed driver Garzón Amo in full for the accident – a number of people expressed unease with the conclusion reached. This is important because, in recent history, several accidents have occurred in which the operator of a rail vehicle did indeed make the final fatal mistake, yet on further investigation Automatic Train Protection (ATP) safety equipment, provided solely to avoid such accidents, turned out to have been ineffective due to having been switched off. This doesn’t diminish the responsibility of staff primarily involved for what happened at all; it just adds to the responsibility of other people. Nothing will ever improve if those ‘others’ can walk away from an accident without reproach. The question is: If safety equipment such as Automatic Train Protection (ATP) doesn’t function properly, as was the case in Spain, can an operator disable it any time he likes? Or does he have a responsibility to protect passengers against inevitable staff mistakes by ensuring the equipment is improved within a set time until it functions reliably? Furthermore, is the operator obliged to switch it back on before passengers are allowed to travel on that type of train?

“If safety equipment such as Automatic Train Protection (ATP) doesn’t function properly, as was the case in Spain, can an operator disable it any time he likes?” On superficially looking through inspection of the recent history of accidents where this issue played a role, the compilation also shows uncomfortably high fatality figures. Working ATP appears to protect well against the most violent of the possible accidents.

In each of the above cases (except the French accident) it appears that capable ATP equipment was viewed as something one fits as a gesture of goodwill for the benefit of frightened customers, to be taken away at will in case of problems, rather than being an essential part of safety requirements to be satisfied before high-speed operations are permitted. An aeroplane is full of such safety equipment that must be operative before it is allowed to take off with passengers on board; why should that be different for passenger trains? ATP is fitted because experience proves that 100% scores are impossible if we rely solely on human beings to uphold safety. The 25-04-2005 Amagasaki accident in Japan with its 106 fatalities and 562 injured, illustrates how easily such accidents can occur. ATP is a last ditch safety net to preserve life and property when all else, notably the driver, fails. Human beings, however well trained, are like that: They fail occasionally, and something to be avoided at all costs with official accident reports, is that they are made to serve party-political purposes – usually to see responsibilities placed away from people who often are well placed to carry them.  The incident in Spain could have seen that happen. This is why those protesting voices are so important.

4 responses to “How responsible can individual staff be made for the occurrence of an accident?”