Level Crossings and the Lorries of Doom 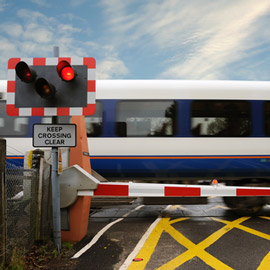 Ah yes, level crossings! Those locations where ill-disciplined road users interact in fascinating ways with railways… My readers may have noticed that I entertain a few hang-ups with regard to this subject; my number one bugbear being when lorries are involved in destructive accidents at those locations. The point is they shouldn’t be! Lorries are not driven by ill-disciplined private motorists, but by professionals. This rant is, in fact, triggered by the widely viewed YouTube videos – from no less than four camera angles – of the destruction of a lorry at Studénka railway station in the Czech Republic on 22 July 2015. It was hit and instantly demolished by Czech Railways Pendolino set 681 003 at approximately 140 km/h impact speed. The Polish driver of the articulated vehicle, with a cargo of aluminium sheet material, was avoiding motorway tolls by taking local routes, which required considerable extra travel time and caused him to encounter a level crossing. Despite displaying flashing warning lights for at least thirty seconds before-hand, for reasons known only to the driver he decided to enter the crossing anyway, to find all four barriers coming down at the same moment and trapping him. That, incidentally, points at an issue I have with this level crossing: Had the barriers come down in pairs (as should be standard practise these days, with the entrance ones first and the exit ones a couple of seconds later) and had the crossing deck been scanned by obstacle detecting equipment that opened an exit barrier in case of detecting an obstacle, then this truck would have escaped.  Three lives would have been saved and several injured (the train driver lost both lower legs) would have been spared their ordeal. Additionally, had the trucker been up to speed with his job, he should have known that closed crossing barriers easily snap off by design when driving through them. However, is that really something we want society at large to know about? Saturday evening fun on the way home from the pub? Anyhow, the trucker escaped serious physical harm and is presently awaiting trial.

“Had the barriers come down in pairs and had the crossing deck been scanned by obstacle detecting equipment that opened an exit barrier in case of detecting an obstacle, then this truck would have escaped”

Should this be something that occurs once every so many years – and for entirely understandable reasons – one could shrug the shoulders and mumble ‘bad luck’. However, that isn’t the case. Only a year later, an electric multiple unit train at speed hit a slow moving tracked machine on an Automatic Half Barrier (AHB) level crossing at Dalfsen in The Netherlands. That train driver lost his life and the damage was considerable. What is surprising is that the international road transport fraternity- who by now have quite a number of accidents caused by ignorance to study – appears unable to cotton on to the fact that automatic railway crossings actually are dangerous venues. This is certainly true if you’re using big vehicles with expensive loads, yet are not prepared to study level crossing functioning and abide by a few rules. That steady ignorance, identifying educational as well as discipline issues, is actually disturbing. Have a look at the short listing below (it is a quick snap-shot and not attempting to be anywhere near complete):

“That steady ignorance, identifying educational as well as discipline issues, is actually disturbing”

A short trawl through videos available at LiveLeak and YouTube will present four times this number of heavy road vehicles all over the world getting smashed up on level crossings. Given that the situation merely requires a smidgen of operational insight when organising the trip – to contact, among others, the relevant rail traffic controllers – this listing points at a lack of imaginative yet practical insight. Additionally, there seems to be a dangerous habit among heavy plant movers to solve problems as and when they occur, which is another way of saying that scouting must appear a bit of a joke. However, if your vehicle with its precious cargo is stuck and straddling the tracks of a busy railway line, it is the last and very costly mistake you will make. In consideration of the railways, therefore; knowing that growing international awareness from the side of road users cannot be ensured, it might be deemed beneficial, and save lives, if they took the initiative on a European level to inform the large number of people involved in heavy road transport, in offices and behind steering wheels, about the dangers of automatic level crossings.

2 responses to “Level Crossings and the Lorries of Doom”