In early-2016 Infrabel, the Belgian railway infrastructure manager, commissioned two new tracks as part of the strategic linkup between Brussels and Denderleeuw. For Global Railway Review, Dirk Demuynck, Director of Build, looks back at the main achievements and challenges of this infrastructure project regarding the railway network and Belgium as a whole… 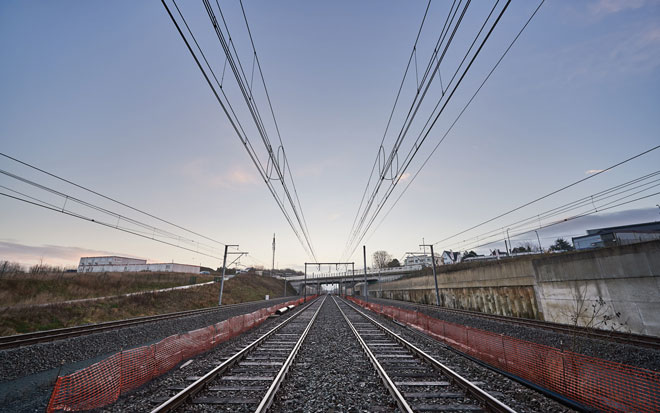 Strategic rail track for Brussels and the Belgian railway network

The expansion of the Brussels–Denderleeuw railway line (Line 50A) from two to four tracks is a gradual process and forms part of the Regional Express Network (GEN). The objective of these works is to progressively optimise train travel to and from Brussels. Through GEN, the capacity of the main railway lines to the capital has been increased to four tracks.

Marathon work weekends are concluded with the actual rail linkups

In the spring of 2008, Infrabel started the works on the new 50C railway line, within the framework of the expansion of rail capacity on the existing 50A line. At the end of January 2016, the two new tracks were phased into service. This was completed in two subsequent marathon work weekends of 56 hours. After the first weekend, the track heading to Brussels entered service, followed by the track to Denderleeuw one week later.

During both weekends the final track, signal and overhead wire works were completed on the new outer tracks (each on either side of the existing tracks), on the 15km-long route between the Anderlecht and Sint-Katharina-Lombeek junctions. The vital link between the new and old tracks was the spectacular finishing touch and served as an example of engineering craftsmanship and meticulous organisation.

Construction of new tracks along the busiest railway line in Belgium

Approximately 115 people were working onsite during those work weekends. The finishing touches were carried out on-board a number of 200m-long work trains. Subsequently, the final checks and tests were performed under the supervision of TUC RAIL, the Infrabel research agency for railway technology. TUC RAIL is responsible for the full coordination of these works.

A unique element within this gigantic mobility project is that a new railway infrastructure had been under construction for many years, whilst the two centre tracks remained in service. The big challenge was that, amid all these works, the trains along the busiest railway line in Belgium (the Brussels–Ghent–Coast line) had to continue to run. Each day approximately 275 trains run on the Brussel–Denderleeuw line, and during rush hour as many as 25 trains an hour.

Carrying out these infrastructure works was a true feat of engineering with numerous technical tours de force. The 15km-long route first saw the installation of the track foundations, followed by the new railway infrastructure. The ground works involved the excavation of 1,100,000m³ of soil and the laying of 750,000 tonnes of crushed stones (ballast) as subgrade. The construction of the railway line further involved 48,000 sleepers and the installation of 600 new overhead wire supports. In total, Infrabel also installed 100 safety beacons for the signals and 28 rail signal cases along the new tracks.

In Dilbeek Infrabel also built a new traction substation that provides the power supply to the overhead lines, thereby ensuring the trains can continue to run. After all, the capacity of the existing Brussels South traction substation is not sufficient to support the two additional tracks. Besides, this allows power to be distributed as effectively as possible between both power stations in this zone around Brussels.

The most eye-catching achievement, however, was the renovation and widening of no fewer than 30 bridges along the railway route, including the 522m Pede viaduct (a listed monument) in Dilbeek. Another important civil engineering work is the new railway bridge across the Brussels-Charleroi canal.

Infrabel has invested a total of €500 million in the new railway infrastructure between Brussels and Denderleeuw. For years this was one of the largest building sites in Belgium and served as a sample project to construct major structures in combination with the continued running of rail traffic.

The investment further includes the installation of sound barrier screens totalling 8km and the planting of 20 hectares of railway verge as compensation for the deforestation along the railway route. In accordance with its sustainability strategy, Infrabel also installed a bicycle path parallel to the railway line, across the full length of the route.

The second phase concerns the renovation of the existing tracks

As soon as the two new tracks of the 50C railway line entered into service at the end of January, Infrabel began the next phase of the works: the renovation of the two existing tracks of line 50A. In 2016 and 2017, the bridges, tracks and sleepers, the overhead lines and the signals will be completely renewed. In 2017 and 2018, work will continue on the railway junctions and branch lines in Anderlecht and Lombeek, including the cross-over sections.

The two tracks of line 50A will be fully renovated by the end of 2018, during which time both tracks will be completely out of service. After all, this is the opportune moment for this necessary renovation, so that rail traffic along the key line between Brussels and Denderleeuw can benefit from four high-quality tracks. This intervention will benefit the strategic priorities of Infrabel in a number of ways: safety, punctuality and capacity.

Dirk Demuynck has been Director of Build at Infrabel since 2014 and also CEO of TUC RAIL since 2003. Dirk studies Civil Engineering and Traffic Engineering and has previously been Project Engineer of rail infrastructure projects and Senior Engineer for high-speed projects. He has also been Director of Works at TUC RAIL plus Head of the Large Projects Management Unit at SNCB.