Peter Jenkins, a widely experienced and highly regarded architect director specialising in railway stations, infrastructure and urban design, discusses the architectural importance of the Northern Hub project and how design will help to transform connections in the North of England. 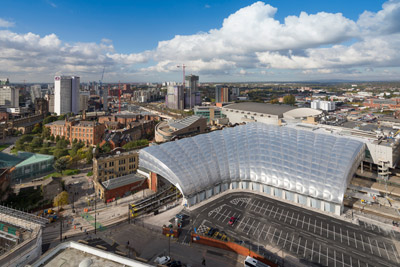 The Northern Hub project will unlock new routes, improve connections and provide journey-times across the north of England from coast to coast. It combines station extensions, new infrastructure and timetabling improvements to massively increase passenger capacity. This will relieve an already over-stressed network and provide for significant expansion. Manchester sits at the heart of these changes, and BDP (Building Design Partnership) is designing all the major architectural and urban elements of the project. To the north of the city centre Victoria Station has received a long-overdue overhaul; to the west the Ordsall Chord is a series of new bridges and viaducts in one of the most important sites in the history of the railways (the first passenger station in the world); Oxford Road will be significantly expanded; two new platforms and a high level concourse will be added at Piccadilly, and the Airport station will have capacity expansion.

“The Northern Hub project will unlock new routes, improve connections and provide journey-times across the north of England from coast to coast”

Constraints presented by the existing fabric (in particular the deteriorating roofs of the platforms & concourse) meant that Victoria station would have been unable to accommodate the increased passenger numbers of the Northern Hub rail expansion proposals and additional lines of the Metrolink tram network. These critical infrastructure capacity improvements defined the brief and played a primary role in design development. 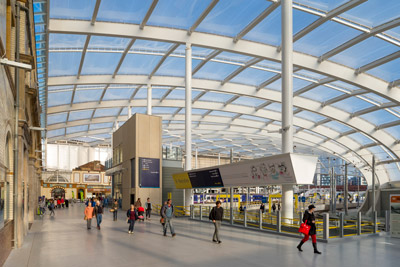 Physical constraints, including a cluttered concourse and the obstructive structures, combined with disjointed relationships between activities to create a station voted the worst of its size in the UK. Despite this status the buildings had heritage features well-loved by station users; a key part of the process was ensuring that these were retained.

To respond to the various aspects of the brief, the different functions of the site have been drawn together into a single volume, enclosed by 10,000 square metres of ETFE cushions. New concourse facilities were constructed inside this space, separating the previously conflicting pedestrian flows. The station complex covers a variety of functions, including the main entrance to Manchester Arena and a multi-storey car park. The interchange integrates these with heavy and light rail, local and shuttle buses, taxis, private cars and bicycles.

By working closely with Historic England and Manchester City Council these core stakeholders were supportive throughout the design process, despite the fact that a substantial portion of the grade-II listed fabric was to be demolished. Favourite historic features (the stained glass entrance canopies, war memorial, network map, restaurant dome, ticket office and mosaics) were restored and celebrated. Other neglected areas (the Soldiers’ Gate, First Class Lounge and rear façade of the frontage block) have been reappraised and revealed to the public for the first time in decades.

“The roof should respect the original building”

For the new structures a requirement from heritage stakeholders was that the roof should respect the original building, avoiding the impression that the existing structures are ‘engulfed’ by the new. To achieve this, the curved geometry of the tram lines is gradually straightened into lines which are parallel to the Victoria Buildings and Arena. This respect for the geometry of the existing structures (on plan) is accompanied by a glass clerestory strip which separates the two (in section). Achieving this geometrical and structural solution required an integrated design approach with the main sub-contractors, using both BIM and wooden models to develop the cladding (which consists of 410 unique ETFE cushions, no two of which are the same). The transformation of the station has created a voluminous, daylit space which can accommodate significant increases in tram and train passenger numbers on a footprint which is actually smaller than the previous station that it has replaced.

A new rail link known as the Ordsall Chord is to be provided between divergent rail lines, connecting Victoria and Piccadilly Station for the first time. This project has significant historic issues to incorporate, with a series of viaducts and bridges arcing around past Liverpool Road Station, the first passenger railway station in the world, and a contemporaneous bridge by pioneering rail engineer George Stephenson.

The flowing ribbon form of the dramatic new railway bridge is intended to both complement and contrast with the buildings around. It will be the first asymmetric network arch in the world, a choice of structural concept developed so that the bridge tapers to a fine point where it approaches Stephenson’s Bridge. The use of weathering (pre-rusted) steel will blend with the surrounding viaducts, and a careful analysis of the existing structures is part of the work required to ensure that an appropriate respect is given to the neighbouring structures. The importance of this location in the global history of passenger railways is reflected in the quantity and status of designated heritage assets around, with three Grade I listed and twenty-one Grade II listed structures affected by, or adjacent to, the new railway infrastructure. The significance of this heritage cannot be underestimated; BDP advised on the development of the rail alignment, acted as heritage consultant and came up with the design concept and form for the main structures with the engineering team. All of this work is concentrated around the need for the scheme to mitigate the impacts on the heritage and townscape context.

“The project will create, in total, over 7,000 sq.m of new public realm spaces” Stephenson’s Bridge, the network arch and a new public footbridge will form the setting of a pair of piazzas on either side of the river. From this centrepiece a series of interconnected spaces will lead, connecting key regeneration sites in the neighbouring area. The project will create, in total, over 7,000sq.m of new public realm spaces and upgrade 2,000sq.m of streetscape to become yorkstone paved, pedestrian focussed routes.