Approximately 27 million tonnes of iron ore are transported annually on the iron ore railway between Luleå (Sweden) and Narvik (Norway) – part of which runs north of the Arctic Circle. Rail operations must also be guaranteed in the winter months in order to transport these quantities. The existing snow blowers have grown old and must be replaced. Therefore, the Swedish infrastructure operator, Trafikverket, ordered a snow blower from ZAUGG AG EGGIWIL / Switzerland. The vehicle (pictured above) costing 9.5 million Swiss Francs is to be used above all on the section between Kiruna and the Norwegian border. 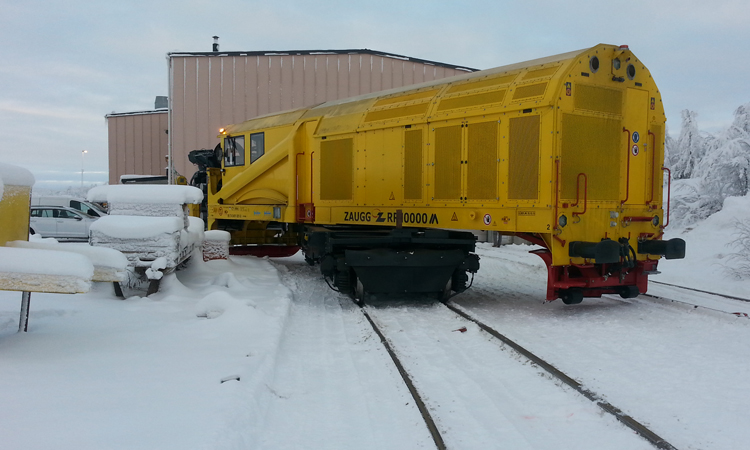 Since the customer requested a purely hydrostatic drive for optimum distribution of power between the traction and clearing drives, the Matisa company of Switzerland, which specialises in track-laying machines, was brought on board as subcontractor. MATISA Matériel Industriel S.A. offers appropriate drives and is additionally responsible for the approval of the vehicle and the drive controls in Sweden.

The four-axle, self-propelled snow blower ZRR 10000 M (ZRR stands for ‘Zaugg Rolba Railway’, M for ‘Matisa’) is driven by two Caterpillar C18 diesel engines, stage III B, each with an output of 470 KW, which act on three of the four wheels sets. When changing the working direction, the superstructure can be swivelled by 180° on the slewing ring within two minutes.

A hydraulically adjustable track plough is mounted at the rear of the superstructure. From the driver’s cab, this can be adjusted in height as well as in the clearance direction to the left or right or in a V-shape to both sides.

In order to balance the weight, the two engines are located at the very rear of the superstructure, with the diesel tank in the centre of the vehicle. An additional auxiliary diesel engine or alternatively a stationary energy supply allows the operation of the auxiliary units as well as the thawing and heating of the snow blower.

The driver’s cab containing the electronic cabinets is supported on the superstructure and damped by spring suspension, as a result of which it is astoundingly quiet in the cab even during snow blowing operation. Two tidy, identically equipped workstations offer a good view in a forward direction. As a rule, one operator is responsible for driving and the other for snow blowing; although the roles can be reversed at any time. One-man operation with snow-blowing is technically possible, but not allowed in practice. In order to be able to start the engine, one of the engine drivers must blow into an electronic alcohol tester. A generously-sized cabinet, which is currently empty, is intended to house possible ETCS equipment in future.

For the comfort of the personnel there is a table with two folding seats attached to the side wall, a refrigerator, a microwave oven and a coffee machine.

In the second half of October, snow blower 99 74 9491 001 left Switzerland on its own wheels bound for Rostock, from where its journey continued by sea. Prior to that, three test drives took place – although without snow – from Bussigny to Brig and Yverdon-les-Bains as well as in the shunting station in Lausanne.