For our latest Women Inspiring Rail instalment, Natasha Zulkifli, Founder & Director of Women in Rail Malaysia and Stakeholder Director at YTL Malaysia, discusses her passion for the rail industry, how she hopes to provide further support to women building careers in rail and her efforts in encouraging others to join the sector. 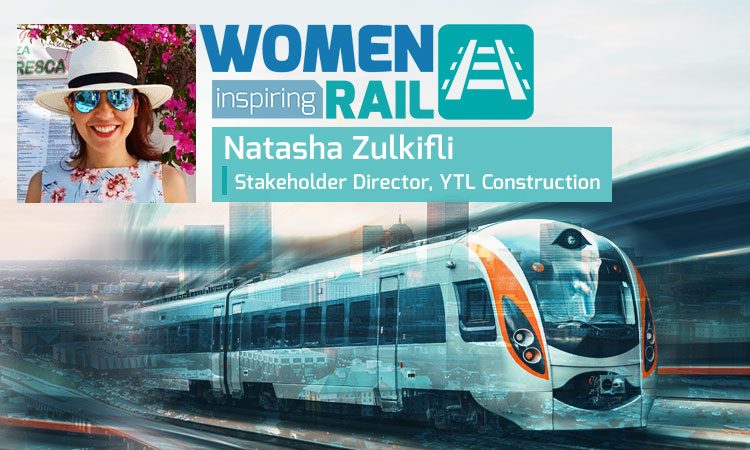 I entered the rail industry by accident. My law degree from the London School of Economics (LSE) wasn’t a precursor to the rail space, but nevertheless has been very useful in the course of my daily work. My rail journey began when I worked for the regulator and planner for the Malaysian public transport industry (SPAD), thereafter moving on to work for Malaysia’s largest rail operator (Prasarana) where I was put in charge of International Relations.

I currently work for a company called YTL Construction and am part of the project team that is building a new 192km electrified double-track rail link for the Malaysian government, in the southern state of Johor. My portfolio includes land matters, stakeholder relations with federal, state and local governments, outreach to local communities, media and events to raise awareness about the project.

The biggest challenge is ensuring the team delivers to an international standard every single day, that they leave no room for mediocrity and constantly strive to deliver a project which is first-class and world-class. Ultimately, when this is achieved, it is also the most rewarding part of my job.

With the opportunity for nation building being so immense, I am excited because I believe the rail industry has the potential to promote economic activity and ensure improved productivity for Malaysia.

The potential for the rail industry to have a role in ensuring the greater good. With the opportunity for nation building being so immense, I am excited because I believe the rail industry has the potential to promote economic activity and ensure improved productivity for Malaysia. Providing connectivity to those that need to use rail as a mode of choice because of financial reasons is also gratifying and heart-warming.

Setting up Women in Rail Malaysia, a not-for-profit organisation in 2017 to not only provide support to women currently working within the industry but also to ensure a steady stream of quality of talent coming through the pipeline.

Setting up Women in Rail Malaysia, a not-for-profit organisation in 2017 to not only provide support to women currently working within the industry but also to ensure a steady stream of quality of talent coming through the pipeline. It has been a long and challenging journey, but we now have more than 600 members, both individual and corporate, and we are still growing. The Leadership Talks we organise have been popular and we will also be running a mentorship and job placement programme.

When I first joined the rail industry in 2012, Malaysia was on a spending spree, ambitiously planning for and building urban metro rail lines in the heart of downtown KL as well as championing the High-Speed Rail (HSR) project to connect the CBDs of Kuala Lumpur and Singapore within 90 minutes. The construction industry was buzzing, good talent was attracted to, and retained, by the rail industry and the government was focused on improving the public transport modal share, utilising rail as the backbone for Malaysia’s transportation needs.

However, since mid-2018 the new government has reconsidered and subsequently scaled back projects and investments in the rail industry due to fiscal challenges. I have been lucky because the project I am working on hasn’t been affected, but many companies and also individuals working in this space have been badly impacted. Investments in the rail industry are now no longer a priority in the immediate term, which is a great pity.

I have worked for two great men, the CEO of SPAD (Mohd Nur Ismal Kamal) and the CEO of Prasarana (Azmi Abdul Aziz). Both are brilliant men and were able to understand at the macro level what Malaysia needed to advance to become an international rail player. They had the vision and tenacity to ensure the outcome was a dynamic and world-class domestic rail industry.

What can be done to diversify the workforce in the rail sector?

There also needs to be more awareness about the need for diversity both at the senior leadership and also working level.

We need to get more young women to study STEM subjects in school. We also need to expose them to the potential career opportunities in the rail industry. That is the overarching objective of Women in Rail Malaysia and we have actually started to do that via talks in schools. There also needs to be more awareness about the need for diversity both at the senior leadership and also working level. Malaysia has made great strides in this area and in fact there was great public interest when I ran a media campaign to highlight the young female trailblazers in the company I worked for at the time (Prasarana) where we highlighted our youngest female train driver (21 years old) and a female rail engineer. The public’s curiosity was piqued particularly as the rail industry is considered a traditionally male domain, so much so that 42 per cent of Malaysia’s national digital population picked up on these two stories – causing them to go viral, both in Malaysia and neighbouring Indonesia.

What advice would you give to those thinking about pursuing a career in rail?

I would tell them that the future in the rail space is very bright and that they should seriously consider a career in the rail industry, particularly as cities will always need good rail transportation links to ensure economic growth. The stigma of it being a dangerous and difficult career working on the tracks is no longer valid. The rail industry actually requires good talent, not necessarily just engineers, but also accountants, HR experts, communications, lawyers and management personnel. I try to walk the talk and am steering my teenage daughter to study science-based subjects and also consider a career in the rail space.