Repoint: The future of track switching?

In 2016, Global Railway Review published an article1 detailing the work of a team at Loughborough University that had developed an idea for a novel track switch mechanism that could, for the first time, bring fault tolerance through redundancy to track switching. This promised to be the first significant change to the track switch in almost 200 years. Funding had just been granted to take the concept – which was proven at a small scale in the lab – forward, build a full-scale switch and take the project to TRL7 – ‘technology demonstration in a representative environment’. Fast forward three years, and the team at Loughborough have fulfilled that task and a period of testing has recently been completed. Tim Harrison, Loughborough University’s Senior Research Associate, explains more. 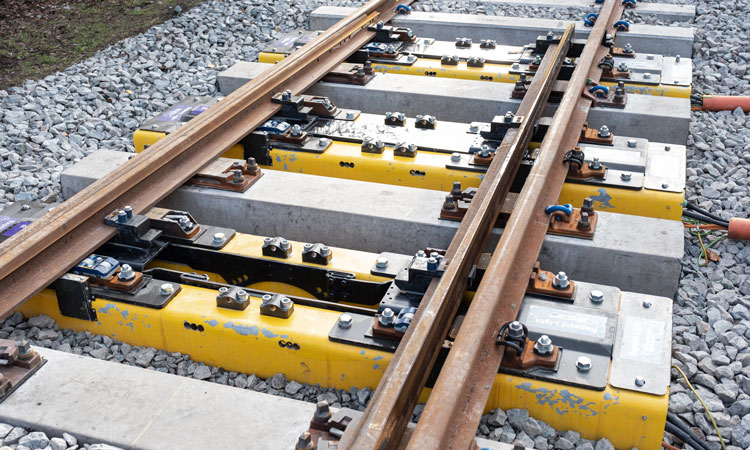 As previously reported, Repoint2 has a number of innovations. For example, when in the normal or reverse position, the switch rails of a Repoint switch sit on locking blocks. The geometry of these blocks is designed so that when the rails are fully down, lateral motion is not possible – the switch is locked. To operate the switch, the Repoint mechanism uses a pair of cams to first lift the switch rails, then translate them across and lower them into the opposite locked position. This ‘passive’ locking allows us to use multiple actuators on the same switch. Should one actuator then fail, the remaining operational actuators can still lift and move the rails. That first actuator failure would be invisible to train crew and signallers, trains can continue to safely pass over the switch. The monitoring system would flag to maintainers that the switch was operating with reduced redundancy and plans could be made to swap out the failed actuator at a convenient time. Rather than maintain and repair the actuators trackside, they have been designed so that the cam, gearbox and motor assembly forms a line replaceable unit (LRU) that would be quickly swapped. The maintenance and repair of the LRU would then take place away from the railway.

The full-scale demonstrator at Great Central Railway (GCR) applies the Repoint actuation concept to an entirely conventional CVS switch panel – the ‘Repoint Light’ option. The initial Repoint concept comprised a stub switch layout but for this project, the focus is on the actuator bearers. For this switch arrangement, the team have added three actuator bearers to the switch panel, longer turn-outs could have more. Each actuator bearer is capable of operating the switch alone.

The first year of this part of the Repoint project was used to study the Network Rail and Transport for London (TfL) requirements for points operating equipment (POE). It was identified that some requirements we could meet, but others were written based on a conventional switch design and would never be met by a Repoint switch. There were design decisions to take, such as how best to drive the two cams in the actuators. Should the cams be driven from a single motor and mechanically synchronised, or could we use two separate motors and synchronise electronically? Bending analysis of the switch rails was undertaken to calculate the forces involved in lifting and bending the rails thus identifying the motor torque and power required. Subcontracts were placed with major suppliers in the project for the sections of work requiring specialist expertise:

Suppliers for off-the-shelf components such as motors and gearboxes and the central processor were also selected.

The test programme grew as components became available. We began with developing the motor control algorithms with a pair of motors on the bench in the lab and the National Instruments CompactRIO FPGA used for supervisory control. When mechanical components were delivered, the first of the actuator bearers was assembled and tested. There was a tense atmosphere ahead of operating the first completed bearer. As it turned out, this was one of the few tests that went without a hitch! The actuator lifted and switched over smoothly and dropped firmly into place with a reassuring clunk.

The next major milestone was operating the complete system in the lab. The remaining two bearers were assembled, and once the location case had been delivered, connected up and tested, we could operate all three bearers along with the definitive control system. The only thing missing was the load – the switch rails.

Progress Rail provided space for us at their Sandiacre facility to test the system complete with the switch panel. They also supplied and assembled the switch panel, before the three actuator bearers were slotted into place on the stock rails and the switch rails dropped into place. We made sure to get a video of the first movement, just in case something broke and it never ran again. That video received almost 50,000 views on social media and got a lot of people talking about Repoint.

Testing in a railway environment

While we had successfully demonstrated at Progress Rail that rails could be lifted and dropped and the other Repoint innovations such as passive locking and redundancy were possible, the final part of the RSSB-funded project was to test the Repoint switch in a railway environment. In November 2018, the switch arrived at Great Central Railway’s Quorn and Woodhouse station and the process of installing it in the south yard began. The Great Central Railway has provided an excellent service to the Repoint team. Testing of trains, on-track plant and railway equipment is a growing part of their business. The switch panel was lifted into place as a complete unit and the permanent way team began the process of lifting, levelling, assembling the crossing and connecting up to the track either side. A few throws of the switch confirmed that all was still well after the move, and without much ceremony a diminutive Class 08 was the first rail vehicle to run over the switch to consolidate the ballast.

The Repoint demonstrator switch has seen a variety of traffic whilst at Quorn, from the occasional steam locomotive to the Class 769 multiple units on test. The Repoint team hosted a launch event in January 2019 where guests from the rail industry could view the Repoint switch.

The current phase of the project has come to an end. The Loughborough University team has demonstrated the Repoint concept at full-scale and the benefits we wrote about in the previous Global Railway Review article can be realised. The next steps for Repoint are the process of development testing, productionising and approvals to turn the prototype demonstrator in to a product that can be installed on the railway. However, Loughborough University does not have the expertise to take a complex system such as Repoint through railway product acceptance, nor the capability to become a point machine manufacturer.

Loughborough University are seeking manufacturers in the rail industry with the resources and drive to turn a working prototype and concept demonstrator into a product that can be installed on our railways that could see the end for passengers of the dreaded ‘point’s failure’ delays.

TIM HARRISON is Senior Research Associate within the Control Systems Research Group at Loughborough University. He has led the engineering team responsible for designing, building and testing the Repoint switch. Tim has 20 years’ experience of transport systems engineering gained in industry and academia, beginning as a graduate engineer at Airbus. His research at Loughborough has focused on railway track switching and bringing aerospace fault tolerant systems principles to the railway.