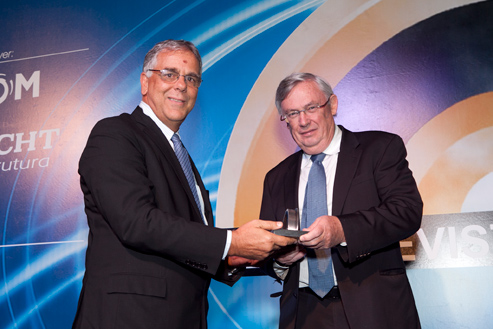 Bombardier has won the award for its game changing INNOVIA Monorail 300 system, delivered with the CITYFLO 650 automatic train control solution. Cost effective to introduce without requiring major infrastructure or civil works, it offers transport capacity up to 48,000 passengers per hour per direction. In consortium with the Brazilian civil contractors Queiroz Galvão and OAS, Bombardier will design, supply and install a 24 km, 17 station INNOVIA Monorail 300 system, with the CITYFLO 650 communications-based train control (CBTC) technology that enables short 75 second headways between trains.

The new line will serve as an extension of Metro São Paulo’s Line 2 between the urban areas of Vila Prudente and Cidade Tiradentes. A total of 54 new monorail trains will operate on this line, carrying as many as 1,000 passengers each. This journey currently takes almost two hours and the new INNOVIA Monorail system will reduce the journey time to approximately 50 minutes, benefiting more than 500,000 users daily.

“This award recognizes Bombardier’s focus on providing truly innovative mobility solutions,” said André Guyvarch, President, Brazil, Bombardier Transportation. “The new high capacity INNOVIA Monorail 300 system offers a transportation capacity similar to that of a metro, yet the light infrastructure required reduces the construction price and the implementation schedule by up to 50%, bringing quality-of-life benefits to passengers sooner and more cost-effectively.”

The 23rd annual Revista Ferroviaria Awards are acknowledged as the most prestigious annual prizes for individuals and companies operating in the railway sector in Brazil. The most high profile projects and developments of the year are selected by the editorial board of the Revista Ferroviaria magazine. These are then voted on by readers of the magazine and its online version.

About Bombardier Transportation in Brazil

Bombardier’s main offices and two fleet maintenance depots are located in São Paulo, and it operates a railway vehicle refurbishment engineering centre in Hortolândia, Campinas. The company is strongly investing in Brazil, and is already one of the major companies in the national railway industry, where it leads the railway vehicle modernisation market sector. Bombardier’s investment plan initiated in 2009 aims to triple the local number of employees, reaching 600 people in 2012, and to quadruple its industrial area in Hortolândia. In addition to the existing vehicle refurbishment capacity, the Hortolândia site is being equipped to manufacture new rolling stock.