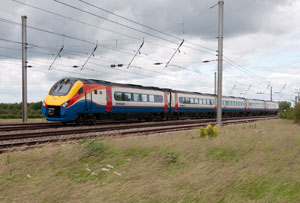 Network Rail and East Midlands Trains have operated a diesel train at 125mph for the first time on the Midland main line.* Special permission was received to run an East Midlands Trains Meridian unit at its maximum speed on Sunday, travelling between Bedford and the site of the former Ampthill station, a distance of 8.5 miles.

The high speed test was set up to research the effects of travelling at such a rate on the line’s infrastructure.

“It also shows how much research has to go in to preparing for an increase in speed. Work carried out on test runs like these won’t just be used on this stretch of railway but will be used in many future rail projects.

“With the upcoming redevelopment of Nottingham station, it’s an exciting time in the region.” Network Rail is working to increase speeds on the route between from spring 2014, to reduce the journey time between Sheffield and London to under two hours.

Scientists from University of Birmingham were invited on the run to examine the aerodynamic effects and pressure waves created running at 125 mph through Ampthill Tunnel. It is intended that the research will then feed in to work on other railways, including the proposed HS2.

Meanwhile East Midlands Trains was researching the driver’s views of the line and its signals at high speed, as well as the all-important ‘coffee-cup test’ inside the coaches.

David Horne, Managing Director for East Midlands Trains, said: “This trial is a small but important test which will eventually lead to faster journeys between Sheffield and London. Taking the train is already faster than driving from South Yorkshire to London.

“This exercise will allow rail to retain its competitive edge over the car and help improve our customers experience. It shows that by working hard, in partnership with Network Rail, we will deliver an even better service to our passengers who use our London services.”

One foot crossing, at Ampthill, was closed and monitored by Network Rail staff, when the train passed by – with two runs in each direction.

The current maximum speed anywhere on the line is 110mph.