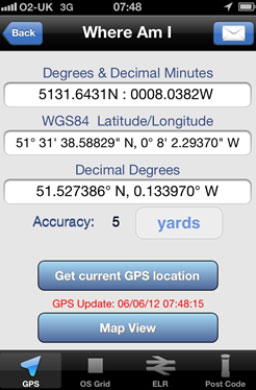 The Where Am I? app in use, showing how it can translate different forms of location information

A smartphone application developed by Network Rail has linked its helicopters to emergency services and track crews to improve its ability to deal with incidents on the railway. The Where Am I? app in use, showing how it can translate different forms of location information

The app for mobile devices, called Where Am I?, was delivered in time for the Olympic Games, when the company’s helicopters were patrolling Olympic stations and routes. It proved its worth in July when a helicopter crew was able to direct police to a location in London where lasers had been allegedly targeting aircraft.

Network Rail’s asset information team created the system so that air crews surveying the line could find their location and send it to ground-based teams in a variety of formats, including the post codes used by the emergency services, grid references used by helicopters and the railway’s own mileage-based line reference.

Network Rail’s director of asset information, Patrick Bossert, said: “We are always looking for innovative solutions to the challenges we face in managing assets distributed over a 20,000-mile network. By using modern technology we can offer a step-change in the speed and ease with which we can locate and tackle problems to keep trains running smoothly.”

The accuracy of the app means that problems can be identified and crews directed to locations with a three-metre accuracy. In complex locations and in cities where a swift response is needed to fix problems, it can make all the difference.