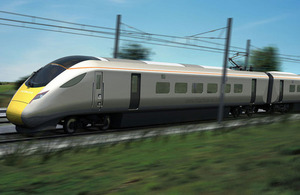 The 270 carriages will be manufactured in Britain by Hitachi Rail Europe at its new purpose-built factory in Newton Aycliffe, County Durham, as part of the government’s overall £5.8 billion Intercity Express Programme (IEP).

The latest order for the trains, called the class 800 series, will be operational on the East Coast Main Line from 2019 and will deliver significant benefits to passengers, including boosting capacity by 18 per cent, improving train reliability by a factor of five and cutting journey times between London, Leeds, Newcastle and Edinburgh by up to 18 minutes.

The order is a boost for Hitachi’s North East manufacturing facility and its 730 planned jobs. It will further enhance the factory’s ability to win lucrative rail contracts across Europe and give the UK another runner in the global race to build the world’s best trains.

“By signing this deal we have provided further proof of our determination to transform Britain’s railways into a world-class operation through continued investment and state-of-the-art technology.

“This new order for class 800 series trains is part of the government’s commitment to invest in our nation’s infrastructure. This will not only deliver significant benefits to passengers by further slashing journey times and bolstering capacity, but will also stimulate economic growth through improved connectivity between some of Britain’s biggest cities. This is good news for rail passengers and for British manufacturing.”

Hitachi has recently completed a deal to build its Newton Aycliffe factory with a local development firm Merchant Place Developments and has said that it will be operational from 2015 with full production starting in 2016.

“This follow-on order by the Department for Transport is great news for passengers on the East Coast Main Line who can look forward to quicker journeys travelling on high-quality trains, with more seats and passenger space, built to the latest safety standards. This order is a tremendous boost for Hitachi Rail Europe’s new factory with its 730 future employees in County Durham and for the British supply chain. This order extends firm orders at the factory until the end of the decade with significant capacity remaining available for further UK and export contracts actively being pursued.”

Last year the Department for Transport agreed an initial order for 596 carriages with Agility Trains, a consortium of Hitachi and John Laing. As well as building the new state-of-the-art manufacturing facility, Hitachi is also planning to construct maintenance depots in Bristol, Swansea, west London and Doncaster, and will upgrade existing maintenance depots throughout Britain to service the class 800 series trains.