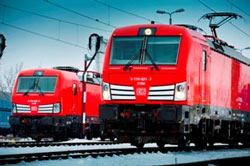 BoxXpress has placed an order with Siemens to supply four Vectron AC locomotives. The locomotives will be handed over to the customer this year at the Siemens locomotive works in Munich-Allach. Siemens will also perform the full service for the vehicles. The ordered locomotives are planned for deployment in cross-border services between Germany and Austria. Alongside national train protection systems, all the vehicles will also be equipped with the European Train Control System (ETCS). The locomotives have a maximum power output of 6,400 kW and a top speed of 160 km/h. The decisive factors for placing the order with Siemens were the good experiences had by boxXpress in operating its fleet of Siemens locomotives in terms of performance and reliability as well as the short delivery time.

BoxXpress is one of the leading providers of combined transportation solutions and and transports a total annual container volume of over 700,000 TEUs within German-speaking Europe.

The power converters being installed in the 70 ACS64 locomotives for Amtrak are also based on the high performance Vectron AC. Vectron power converters have successfully completed over 45 million kilometers equivalent to circling the Earth more than 1,000 times so far in these various applications.