MTR Corporation welcomes the announcement by the New South Wales Government in Australia that it has formally awarded the Northwest Rapid Transit Consortium the Operations, Trains and Systems contract for the North West Rail Link in Sydney… 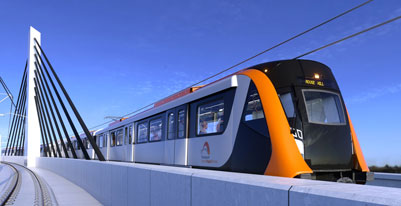 MTR Corporation, which operates London Overground and was recently awarded the Crossrail concession, welcomes today’s announcement by the New South Wales Government in Australia that it has formally awarded the Northwest Rapid Transit Consortium (NRT) the Operations, Trains and Systems (OTS) contract for the North West Rail Link in Sydney. The North West Rail Link is Australia’s largest public transport project and upon completion, the 36-kilometre railway between Rouse Hill and Chatswood will be the country’s first fully automated rapid transit network.

The OTS contract is a Public-Private Partnership covering major parts of the design, construction and financing of the North West Rail Link as well as the operation and maintenance of the new line for a period of 15 years. The works will be undertaken by MTR together with NRT consortium partners John Holland Group, UGL Rail Services, Leighton Contractors and Plenary Group. MTR will invest in the project and will take the lead role in railway operations, commencing from 2019.

MTR Corporation is acknowledged as a leading operator of metro, airport, and commuter rail systems across the world. In the UK MTR is a bidder for the ScotRail franchise and joint venture operator of London Overground, which is one of the most punctual and highest quality services in the UK with 96% of all trains on time and a customer satisfaction rating of 91%. In July the company was also awarded the Crossrail Train Operating Concession by TfL, with the first phase of services starting in 2015, and full services across London by 2019.

“This is a very exciting project for MTR and our consortium partners. Together, we are absolutely committed to delivering a world class new railway system for Sydney and demonstrating how our international expertise can contribute to the future growth of this great global city,” said Mr Lincoln Leong, Acting Chief Executive Officer of MTR Corporation.

As Australia’s first “turn up and go” rapid transit network, the North West Rail Link will operate 15 trains an hour during peak periods and provide the highest level of service and safety in the Australian public transport market.