The last stretch of the Trans-Siberian Railway—a bridge across the Amur River— opened on 05 October 1916 in Khabarovsk. 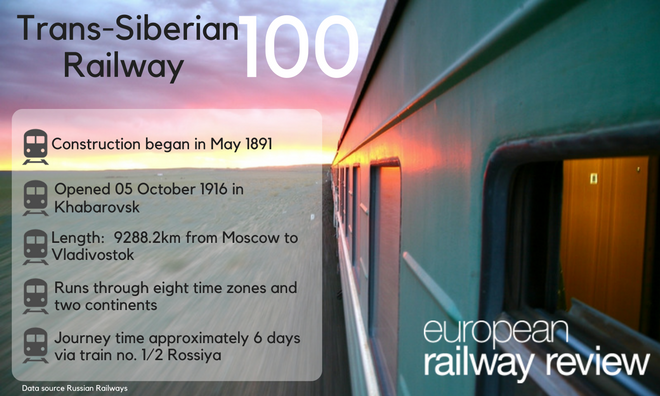 The last stretch of the Trans-Siberian Railway – a bridge across the Amur River – opened on 05 October 1916 in Khabarovsk. With a length of 9288.2km, the Trans-Siberian Railway is the longest in the world. It starts at the Moscow Yaroslavskaya railway station and runs to the Vladivostok station.

Construction of the Great Siberian Way (its historical name) began in May 1891 near Vladivostok in the town of Kuperovskaya Pad. The 23-year-old Crown Prince Nicholas Alexandrovich, the future Emperor Nicholas II, loaded a wheelbarrow full of dirt, dumped in onto the mound and, as the orchestra played, he laid the first stone for the foundation of the station.

The Trans-Siberian connected European Russia with Siberia and the Far East. The road runs through eight time zones and across two continents: Europe (19.1% of the length) and Asia (80.9%). It is the longest passenger train route in the world and is popular not only for Russians, but also for many foreign tourists. The distance from Moscow to Vladivostok on train no. 1/2 Rossiya takes six days and ten minutes.

The Trans-Siberian plays an important role in the socioeconomic development of the country. The regions that the railway passes through produce 65% of Russian coal, carry out 20% of refinements, and provide 25% of wood.

The highway offers access to the East on the rail networks of North Korea, China, Mongolia and Kazakhstan and to the West through Russian ports and border crossings to European countries.

The Trans-Siberian transports an enormous amount of foreign traffic. In 2015, 113.1 million t of export-import cargo was shipped.

JSC Russian Railways is implementing the Trans-Siberian in 7 Days project, making it possible to deliver goods within the specified time from Far Eastern seaports to Russia’s western borders.

Since 2013, on behalf of the president and government of the Russian Federation, JSC Russian Railways is implementing the railway-infrastructure development project of the Eastern area (Baikal-Amur Mainline (BAM) and Trans-Siberian Railway). Its completion by 2020 will enable Russian companies to export annually up to an additional 66 million t of cargo, which will contribute to the growth of industrial production, job creation, and the creation of conditions for the sustainable development of Siberia and the Far East. Total investment in the project will amount to 562 billion rubles.

In 2013-2015, 148.1 billion rubles was spent to modernize the BAM and Trans-Siberian. Ninety-seven kilometers of station tracks were developed and lengthened, 154 km of second tracks was built, about 3000 km of track was modernized and renovated, and 1500 railroad switches were laid.