Anna Delvecchio is honoured with plaque at London Transport Museum

Transport’s Woman of the Year 2018, Anna Delvecchio, has been immortalised with a plaque adorned upon a wall of the London Transport Museum. 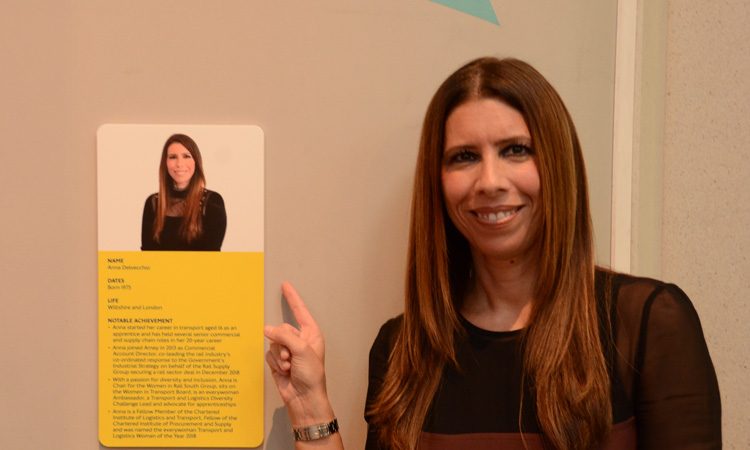 Anna Delvecchio, Commercial Account Director at Amey, has received unique recognition from the Rail Supply Group at the London Transport Museum. Sir Peter Hendy, Chairman of Network Rail and trustee of the Museum, along with Rail Minster Andrew Jones, unveiled a portrait of Anna at a Rail Supply Group Reception. Anna’s picture will now hang in the museum to inspire future generations of female engineers and transport professionals.

The prestigious accolade is in honour of Anna’s work, both in developing the Rail Sector Deal and her leading work promoting diversity and inclusion across the industry. She has also been made a patron of the London Transport museum.

Delvecchio said: “I am incredibly humbled and grateful to the Rail Supply Group and the London Transport Museum for this incredible gesture. I am more committed than ever to continue what I have started and make the transport profession a more inclusive place for all.”

Sir Peter Hendy said: “I am absolutely delighted for Anna and she fully deserves her place in history. We need more women in the transport profession. Her leading role in securing the Rail Sector Deal, as well as her work promoting diversity and inclusion, is an inspiration to all.”

Over the last two years Anna has been co-leading the Rail Sector Deal, the rail industry’s co-ordinated response to the government’s Industrial Strategy. The ambitious proposal, which aims to meet key rail challenges, encourage cross-industry collaboration and drive innovation, was secured in December 2018.

Anna has also become a leading figure for diversity and inclusion for the transport and logistics profession. Anna is the Chair for the Women in Rail South Group and is also on the Women in Transport Board. She is an Everywoman Ambassador and in 2018 was named their ‘Woman of the Year’.

Ellie Milles, Documentary Curator at London Transport Museum, said: “London Transport Museum is keen to celebrate and recognise women’s achievements. As a Kids In Museums 2019 nominee we are excited to show the stories to inspire the next generation of women transport workers. We are delighted to recognise the valuable contribution that Anna Delvecchio has made to the transport industry and for women working the sector.”

Paul Sainthouse, President at CILT UK, said: “This is a fantastic achievement for Anna. In the centenary year for CILT, we have laid out our plan to create a global institute, for a global profession, and Anna as fellow of the institute, has inspired the profession’s future talent, while driving our diversity and inclusion programmes. I am genuinely delighted for her. “