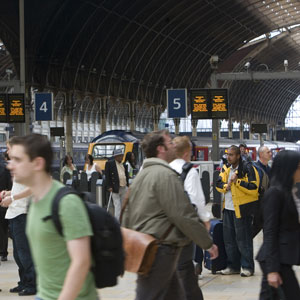 Network Rail today published an analysis of passenger congestion at stations along with a range of measures that could relieve it as part of its network route utilisation strategy (stations).

Congestion can affect passengers at smaller, local stations as much as at the biggest and busiest. It can be limited to peak times or be a continuous problem that only affects a particular part of a station.

Stations such as King’s Cross, Birmingham New Street and Reading are already undergoing major redevelopments to cope with projected passenger numbers, so the analysis identifies stations not covered by committed enhancement schemes that would benefit from further investigation into congestion reduction measures.

Paul Plummer, Network Rail’s director of planning and development, said: “If not tackled effectively, passenger congestion at stations could reduce the popularity of rail travel. Working with a range of partners across the rail industry we have identified a number of stations that would benefit from further investigation into congestion reduction measures.

“We know there is no one-size-fits-all solution, so the strategy is not prescriptive, and instead includes a number of cost-effective measures that could be tailored to the needs of individual stations across Britain.”

Today’s publication marks the start of a 60 day consultation period after which Network Rail will consider the feedback and publish the final strategy.