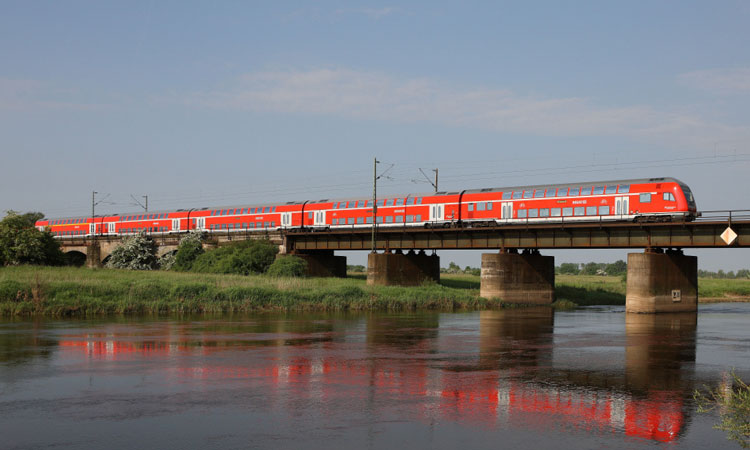 Since the early 1960s, there have been plans to expand the rail network in the hinterland of the North German seaports. At the beginning of the 1990s, these ideas took on a concrete form with the ‘Y route’. But the planned new line through the Lower Saxony Heath ultimately failed due to budgetary resources that were not continuously available. In 2016, Deutsche Bahn (DB) completely re-organised the project and is now planning the expansion and modernisation of several existing lines between Hamburg, Bremen and Hanover instead. The mission: More attractive connections for millions of travellers; sustainable infrastructure for a quarter of all German freight traffic; noise protection for 200,000 residents; and an essential contribution to climate protection.

The European Union (EU) declared 2021 as the ‘European Year of Rail’ to promote the switch to rail as a safe and sustainable means of transport. In this article, we describe how we have been planning the expansion of around 400km in the existing rail network and what benefits and opportunities this means for people, the climate and the economy in the north.

Opportunities for people, the environment and the economy

The German seaports in the heart of Europe are of central importance. Already, every fourth goods train in the Northern Germany region runs between Hamburg, Bremen and Hanover. The better the ports are connected to the inland, the better the import and export nation and the entire European economy can develop. A strong rail network between the three metropolitan regions will also allow for more stable and punctual rail traffic in the future and shorten the travel time on the ICE between Hamburg and Hanover. Due to the more attractive rail connections, around 300,000 car and 100,000 truck journeys and the corresponding climate-damaging carbon dioxide emissions on the roads can be saved by 58,000 tonnes in the future – every year. Another advantage is that, thanks to the expansion and new construction measures, residents will be entitled to noise protection that would not be feasible without the project. It will be noticeably quieter in large parts of the region.

In order to reap the benefits of the project, many different measures are necessary

On a total of 400km of track, many different expansion and modernisation measures are pending. We are: Building new tracks; upgrading existing lines; electrifying new sections on which only diesel locomotives can currently run; and modernising and building new bridges, noise barriers and signal boxes. Expressed in figures, this means that, for our customers and the residents along the lines, we will invest almost €4 billion in the coming years in about 400km of modern lines, 400km of additional noise protection, 500km of new overhead lines, 900km of modern European Rail Traffic Management System (ERTMS) and European Train Control System (ETCS) technology, as well as more than 2,000 engineering structures, 400 points and 35 signal boxes. There is a lot to do! 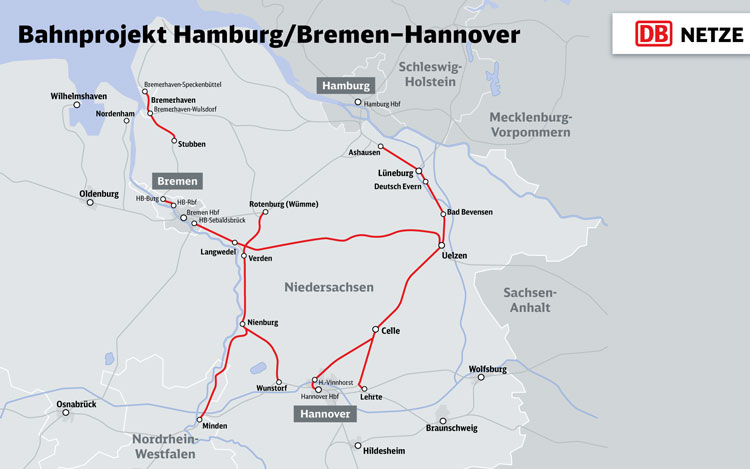 We still have a long way to go

Continuous and substantial progress in this huge project is only gradual, but increasingly noticeable. All in all, we are still comparatively at the beginning of our complex planning. First of all, this mammoth project had to be divided into manageable sub‑projects, which in turn had to be prioritised in a time-sensitive manner because, if all of the sections were built at the same time, no train would be able to run in Northern Germany. That is why we are planning in parallel in different and differently complex sections and are planning in such a way that we can build sections one after the other and put them into operation. To give you an idea: For each section of the line, it takes approximately 10 years for planning and the necessary approval procedures, and then roughly five to seven years for construction. The first construction work is expected to start in the second half of this decade, and the first sections will go into operation at the beginning of the 2030s. We have made the most progress with the planning in the west of our project, on the section between Rotenburg and Wunstorf. Here, among other things, a previously single-track line is to be upgraded to double-track and the line capacity increased (through block densification). The legal preliminary planning for this was successfully completed in 2020 and 3D simulated.

A major focus of our planning is currently on the route between Hamburg and Hanover. A study is currently being carried out to determine the extent to which the technical requirements of the line extension or new construction can be reconciled with the environment and regional planning concerns. 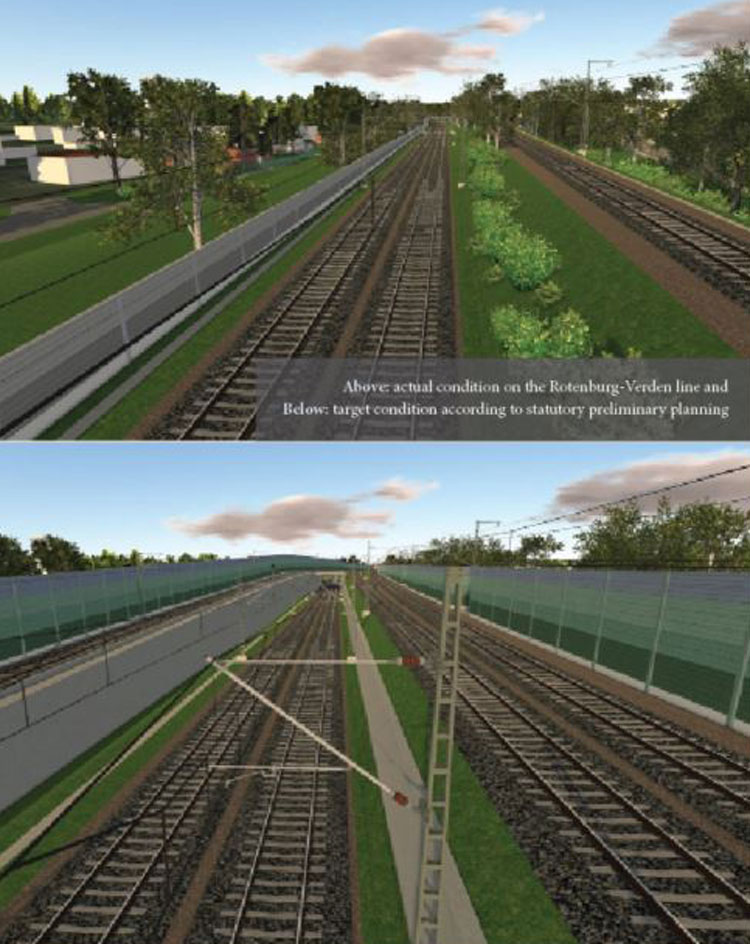 Public participation as an instrument for creating acceptance

Due to the sheer size and the long and emotional history of the project, a lot of eyes are already on us at this early stage. Nowadays, this is typical for projects of a comparable size. It is an enormous challenge to organise the dialogue with, for example, a good dozen citizens’ initiatives, four participating federal states, the Federal Ministry of Transport, the Federal Railway Authority, 12 districts and even more municipalities, associations and private individuals. A comprehensive communication concept helps us to coordinate the interaction and dialogue with all of our stakeholders.

As planning and dialogue are inextricably linked in the Hamburg/Bremen-Hanover railway project, public participation is particularly constructive when all dialogue partners talk about the same figures, data and facts. For this reason, the project has been providing regular information about the project’s goals and progress through various channels since the start of planning in 2016 – in person, at on-site events and through digital platforms. In this way, we turn those directly affected into active participants. This not only increases knowledge about the project, but also the understanding and acceptance for the planning and, later, construction.

To drive forward the complex planning of this mammoth project in the interest of our numerous stakeholders and to create acceptance for it in the region is a great responsibility, which we are facing intensively. To this end, we have built up our capacities quickly and consistently and aligned our organisation to this outstanding task. In 2015, the project team consisted of only three employees. Since then, around 80 project and environmental engineers, business people and communicators and soon more than 200 specialists from globally recognised planning and consulting companies are working to turn the vision of the Hamburg/Bremen-Hanover rail project into reality.

In doing so, we are making an important contribution to the strong railways of Germany and the whole of Europe. We want to become cleaner, quieter and faster – for the people, for the environment and for the economy.

These and many other ‘plus points’ that we want to achieve with our project can also be found on our project website.

If you don’t want to miss any news regarding the progress of the project, please register for our notification service and, if you have any questions, please do not hesitate to contact us.

A graduate civil engineer, Matthias Hudaff has been an executive at Deutsche Bahn (DB) for 20 years. For the past five and a half years, he has been in charge of the major Hamburg/Bremen‑Hanover project, thus shaping it from the very beginning. Before that, he was the general authorised representative of DB ProjektBau GmbH from 2011 to 2015, managing the major project of the Karlsruhe-Basel extension and new-build line and, before that, from 2008 to 2011, the Berlin North-South axis consisting of S21, Dresdner Bahn and the BBI rail link. His main highlights in recent years are the punctual commissioning of the rail link to the new Capital Airport in 2011, the Katzenberg Tunnel north of Basel in 2012 and the start of construction work on the Rastatt Tunnel in 2013.

Julia Chorus studied Public Relations in Hanover and has been working in stakeholder management for three years across various major projects of Deutsche Bahn (DB). For approximately 1. 5 years, Julia has been conducting the dialogue with the stakeholders of the Hamburg/Bremen-Hanover rail project personally, at on-site events and through digital platforms.