Founded in 1946, the HÜBNER Group has turned into a global player in the mobility industry. This year the company is celebrating its 75th anniversary. 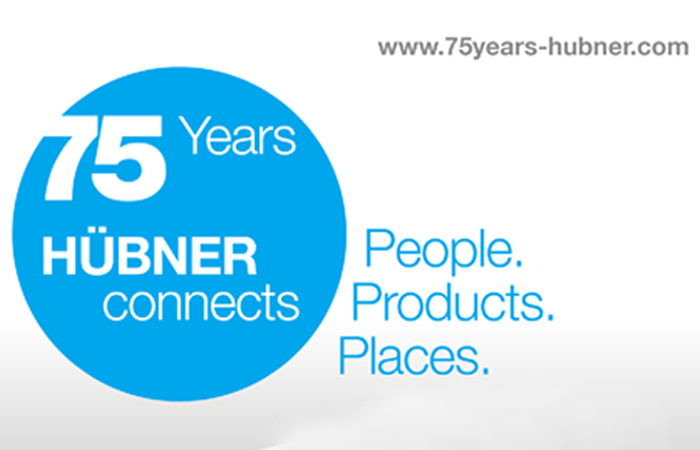 What began in May 1946 as a small repair shop for rubber articles in war-ravaged Kassel has developed over the decades into a true global player in the mobility industry: With approximately 3,500 employees at more than 30 locations, the HÜBNER Group is now a world leader in the field of gangway systems as well as elastomer seals for buses and trains. In addition, the HÜBNER Group also supplies chassis systems, cockpit displays, folding canopies for passenger boarding bridges, coated textiles for biogas systems and GRP hoods for construction vehicles. And for several years, high-performance lasers have also been part of the company’s product portfolio. The organisation’s 75th anniversary is being celebrated under the motto: ‘HÜBNER connects. People. Products. Places.’

“It’s the motto we’ve lived by for 75 years,” explains company owner Reinhard Hübner. “Our gangway systems for buses and trains have made us known all over the world – it doesn’t matter whether it’s a bus in London, a tram in Melbourne or an express train in China. Our products can be found around the globe, and they give people safety and comfort while making it possible for them to move freely from car to car in rail vehicles. However, what is less well known, for example, is that the finger protection profiles for doors on ICE trains also come from HÜBNER, or that we also supply products for the medical sector as well as for research and scientific applications.”

In contrast to the general industry trend of focusing simply on a single product group, Reinhard Hübner sees his company’s broad positioning over a range of product groups as a distinct advantage. “Business segments can fertilise one another and try out innovations for different applications. In addition, the broad portfolio makes us independent of fluctuations in individual markets.”

The roots of the HÜBNER Group

The company was founded by Kurt Hübner in 1946. “Originally from Berlin, my father lived with his family in Lugau in the Erzgebirge Mountains of Saxony during the war, where he repaired and maintained conveyor belts for the local coal mines of the Ziller company,” Hübner recounts on the occasion of the anniversary. “At the end of the war, he was just able to flee from there in a fully loaded car with his wife and children to come to Kassel to the home of his in-laws. Their house had a bombed and burned-out roof, but it was enough to be able to live there and to begin to build a new life.”

The company quickly established itself in the region as a rubber specialist and the first place to go when it came to special developments.

In the post-war period, Kassel had a great need for reconstruction and repair work with its industry largely destroyed. In meeting some part of these needs, Kurt Hübner was supported by his father-in-law Georg Schnellhas, a talented craftsman who had been a master machinist at Henschel, one of the most important locomotive manufacturers in Europe at the time. In the early days, the two men worked together mainly on orders for the repair of rubber articles, such as rubber boots for a nearby sugar factory.

The company quickly established itself in the region as a rubber specialist and the first place to go when it came to special developments. In 1952, the former Kassel-based company Henschel built the first articulated buses – and HÜBNER was able to develop the first bellows for covering the articulation and for providing a gangway for passengers into the trailer. The gangway was made of rubber-coated fabric and the the individual sewn folds were bordered on the outside with aluminum profiles. It was to become the most significant development step in the history of the company. Later, gangways for rail vehicles were developed on a similar principle. And a new supplier for the bus and rail industry was born.

The first foreign subsidiary of the company was established by Reinhard Hübner in Brazil. “The production site near São Paulo provided us with low-cost manufacturing with German quality and at the same time enabled us to supply the then emerging markets in Latin America,” says Hübner, explaining the move across the Atlantic at the time.

To meet growing demand, HÜBNER established additional large foreign locations – in 1995 in Charleston, South Carolina in the USA, and in 2002 in Shanghai, China.

While he concentrated on international expansion, his father looked after the management of the company as a whole and the main production site at the company’s headquarters in Kassel: “My father,” recalls Reinhard Hübner, “never retired. He managed the company – his great life’s work – until his death.” He shaped the company accordingly: “The employees were called on to take pleasure in their own development and the development of the company. This was the motivation for them to create innovative products for the customers, with better designs and better applications. There was always a great value placed on this,” says Hübner. “It’s a tradition that still applies for our company today.”

After the sudden death of his father, Reinhard Hübner took charge of the company in 1985 and, together with managing directors Günter Schwind and Harald Ossendorff, who joined the company a little later, worked to ensure the further development of the bus and rail supplier. In the following ten years, the company’s sales nearly tripled. To meet growing demand, HÜBNER established additional large foreign locations – in 1995 in Charleston, South Carolina in the USA, and in 2002 in Shanghai, China. In subsequent years, further production facilities were developed in Hungary and Russia.

High-speed gangways from HÜBNER are now in use all over the world. In China, for example, together with a joint venture partner, HÜBNER was the sole gangway supplier for Chinese high-speed trains for a good ten years. In the past ten years, further international branches have followed, including in Sweden, Italy, France and India. Reinhard Hübner: “Think globally, serve customers locally. That also describes our company philosophy today.”

Now in 2021, HÜBNER is not only the worldwide leader in gangway systems for buses and railway vehicles but also a well-recognised specialist for sophisticated solutions and products made of elastomers, insulation and composite materials, as well as a supplier for applications in the field of laser, terahertz and high frequency technologies. In total, the HÜBNER Group now employs more than 3,500 people. Reinhard Hübner: “And many of them remain loyal to the company for 30, 40 and more years – the best sign of a good family business. Hübner himself has turned over the operative management of the business to non-family general managers – Helge Förster, Ingolf Cedra und Gerald Steinhoff – and leads an advisory board that sets strategic guidelines for the company.

In the anniversary year, many special activities are planned, such as a free day of public transport for all passengers at the company headquarters in Kassel.

Find out more about the company’s 75th anniversary here.